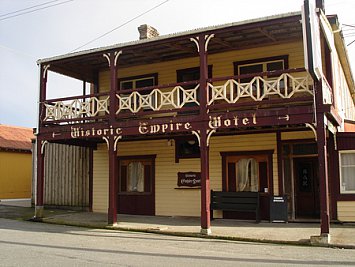 Good historic hotels are getting harder to find. Increasingly the elderly pubs of the nation are being gentrified and scrubbed clean. Their walls are being painted up nice, a colour consultant is hired, and the big boys move in and take what was once the character of the place and reshape it into something more . . . marketable?

The history that was once in the walls is re-framed and hung on the walls. And that's the difference.

In some cases new owners simply go to a secondhand shop and buy up old pictures to put up and create the illusion of something historic.

Yes, a good old hotel is getting hard to find.

Unless you head to the West Coast where the lack of tourists for two decades from the Sixties meant the grand dames of the hotel trade were there for locals and not thrill-seeking backpackers or tourists in search of flash accommodation.

These hotels didn't change much over the years, and nor did their clientele. Both just got older, a little more saggy, a little more creaky in their joints.

But they still breathe character and warmth -- few more than the Historic Empire Hotel in Ross, half an hour south of Hokitika.

Ross -- population about 350 -- may just seem a cluster of houses, a school, a museum, and a few shops. But it can boast three drinking establishments.

But it is the two-storey Empire -- which you see side-on at the sharp turn in the road when you are travelling south -- which beckons you.

There has been a hotel on this site since 1866 but the current one was built in 1908 after its previous incarnation was destroyed by fire.

It was a Saturday afternoon when we parked outside -- and you can't do that in big cities -- and pulled open the swinging doors of leadlight.

The vast room was warmed by a huge open fire and the walls were covered in photos that no one had gone to a secondhand shop to find.

The long bar was stacked with liquor of all persuasions, there were shields and trophies around the walls, faded posters, and that famous -- and on the West Coast, obligatory -- photo of Michael Joseph Savage. Equally though there were photos of local identities, and a worn-looking poster asking for information about the mysterious death of an itinerant on the beach some years before.

This was a pub that was seeped in local character - and a few of them sat at the bar watching the rugby on a large screen above the pool table where a game was in progress.

The place was cozy, dark and welcoming. The owner Mark Brown offered his hand and asked where we were from. You don't get that where I come from.

Mark showed us to our choice of rooms upstairs -- we were the only occupants in a place that sleeps 20 in the hotel, and has a further 14 cabins each sleeping four in the backpacker accommodation built nearby.

We chose a clean, light and airy room with an en suite, a big comfortable bed and a view towards the coast.

"If you'd have come in a couple weeks we’d have been full," said Mark.

After we'd unpacked I went back to the bar and chatted with Mark.

He had spent the early part of his life in Christchurch working in pubs but when the glue-sniffers moved in the Square he thought it was time to pack up the family and leave. So 20 years ago he bought the Historic Empire Hotel.

But he was smiling so I didn't take him seriously.

On this night he was barman and chef so he'd slip back and forth between the handles and the kitchen. He asked me if we wanted for dinner.

"What have you got?"

"What would you like? We can do burgers, steaks, venison steaks, fish . . . You want whitebait, we can do that too. From frozen though I could do toasted sandwiches, bacon and eggs . . ."

I stopped him -- it seemed whatever we wanted we could have -- because venison steaks sounded good.

"You'd like port wine gravy with that, it's pretty good," he said.

I took that to be true, Mark didn't seem like a guy given to unnecessary boasting.

He disappeared off to the kitchen, the pool game ended, a guy came up and asked where we were from, we chatted about how great the Coast was . . .

"I grew up in a country where drivers used to wave at each other on the roads," I said. "I like that country and you guys still seem to live in it."
He nodded.

"Yeah, no one else on the roads, mate. You do it out of boredom. But no, it's good here. You probably know whose driving around anyway, you recognise their car."

Mark came back with the venison steaks on a large plate stacked with fresh part-boiled veges and chips, and an aluminium pot containing the gravy.

"Just cut a bit off and dip it in that, see what you think".

He went back to behind the bar. Someone on the screen scored a try and the patrons -- only about a dozen in all -- exploded in cheers.

I dipped a sliver of perfectly cooked venison into the pan and tasted it. You know the next part. Another guy came over.

"G'day, I just got to ask. I've seen you cutting up your steak and putting it in there. What's in the pot?"

"The best gravy I've ever had, I think."

And so the night drifted away in a great old pub with friendly, unpretentious people.

We slept soundly in the big bed and the following morning had breakfast at the bar again.

We paid an absurdly small bill -- I've parked a car in Auckland for a day and it cost about as much -- then we shook hands.

He -- and his wonderful old hotel unbothered by the need to manicure itself for the market -- undoubtedly will.

"You make a gravy, just an ordinary gravy like you would from a roast, and then you add two tablespoons of raspberry jam. Or blackberry jam, that's pretty good too. You stir all that together slowly and then you add about half a small glass of port. Stir that slowly and if you want to thicken it up you add more gravy. But really that's it."

we had a lovely nights stay in the old empire in 2006, i was over from wales, touring around. i was pleasantly surprised when i went down in the morning to see a duck and five ducklings walking into the bar,no i wasn't drunk too much!. the character of this place is a nice reminder of how the world should be

Performing there tonight ..It is a GREAT place for music ... was looking for something to post on Facebook about the lovely old empire Ross and I just found it xx

We couldn't agree more re your comments. The Empire was stunning: we stayed in the bar, over lunch, longer than should have and arrived late to our next destination. But who cares?!! That kind of magic is almost extinct. Wondrous!

Slow.  The Empire Hotel is magic. Stayed there 3 times and have made it a MUST every time we return to New Zealand.

A lovely story Graham, and this a beautiful and apt turn of phrase: "The history that was once in the walls is re-framed and hung on the walls."
I passed through Ross 2 summers ago with my partner and kids, the first visit for me in more than 25 years, having spent many holidays there staying with my grandparents.
Sadly, their house and the huge tree upon it have disappeared into the expanse of the gold mine. A certain melancholia was felt, remembering trips over from Christchurch as a kid, with 9 of us crammed into a blue Morris Oxford, trailer with camping gear towed behind us, inevitably arriving tired and drenched after being flooded out of some great camp spot.
Still a beautiful place, and maybe the empire might need to be our accommodation sometime soon.