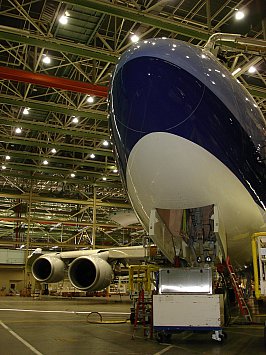 This is the place where words fail, where comparisons seem inadequate or, at best, only marginally helpful. This is where sheer scale overwhelms you, has you gasping.

If this were a natural phenomenon you could demur to a higher authority, make reference to the hand of God raising it up from the earth, say something about being humbled in its presence.

But Man built this place, so for comparisons it is to Man's other handiwork you should go. So here goes.

Each of the six doors along the front of this factory is about the length of a football field. The outside wall measures 3.5 kilometres and if you were so inclined you could stash 3.3 million Coke cans inside this building. It is 35 metres high -- What’s that? About eight or nine storeys? -- and in the ceiling are a million light bulbs. The floor area covers almost 100 acres.

This single-frame building is so big it has roads inside it and if you stand on the corner of East Main and North J the exits in the distance are mere pinpricks of light in the distance. Workers here cycle or take a golf cart around it.

An aircraft could be misplaced in one corner -- although if it were, the person behind the motivational signs that are everywhere ("If you don't make time you won't find time") would be after someone's tail.

This is the Boeing factory in Everett outside Seattle, and according to the Guinness Book of World Records it is the largest building in the world by volume. You can put over 900 basketball courts or more than 2000 average sized homes in here and still have room around the edges. No wonder people queue up to look inside.

Since it opened for official public tours in 1968 more than two million visitors -- including presidents and prime ministers -- have been through the Boeing factory, ushered around by an employee who recounts the history of this giant of aviation and aeronautical invention.

Aside from enjoying the recurring wow-factor, I am here on business because Air New Zealand is taking delivery of eight of the new Boeing 777-200ER (extended range) aircraft -- four purchased and four leased -- in a deal which will cost the company in excess of $NZ1 billion.

It is another phase of a long-overdue upgrade of the company's fleet which includes the current overhaul of the interiors of the 747s. Then come the new 777s, and the process culminates in five years when Air New Zealand takes delivery of two 787s, the next generation of Boeings, for which the company will be a launch customer.

My day has started at that far end of the process, a look at the mock-up of the spacious 787 with Ken Price, the regional director of marketing. It isn't like an aircraft as we know it.

Research revealed that passengers like the idea of flying better than the event itself. Flying -- as we know -- is often boring and uncomfortable, and you arrive at the door of your aircraft after the discomforts of getting to the airport, checking in, waiting around for your call and so on. By the time you reach your plane any notions about the romance of flight are gone.

"We want to reconnect people back to the excitement of the flight experience," says Price as we discuss that typically claustrophobic tunnel that leads to the aircraft.

And so Boeing researchers, psychologists and industrial designers canvassed opinion of travellers and came up with this . . .

We step into a spacious, pastel coloured atrium bathed by muted, coloured lighting. Immediately there is a sense of space and airiness. Ahead is what looks like a concierge's desk in a swanky hotel.

Price notes the concept of the atrium has references to religious architecture which inspire awe -- and it does feel slightly awe-inspiring. There are gentle arches to the design which soften edges, the ceiling is high, and LED lighting can be faded up and down to better mimic the softer rhythms of dawn and dusk. The texture of the interior walls is specifically designed to be slightly difficult to focus on, so you focus on far distances in a clever psychological trick to suggest greater internal space. The windows are larger so passengers can get more sky above and cloud below, again affecting your concept of spatiality.

There are long sight-lines (no central aircrew station to create a claustrophobic barrier) and even the toilets have windows. You feel you can breathe.

If this is the future of flight, then sign me up for the longhauls to Rio, New York, Mumbai and Johannesburg that this aircraft will be able to make in a non-stop flight from Auckland.

"This is a new airplane for a new world," says Price.

He's probably right, but the future isn't quite here yet. The glamorous 787 Dreamliner -- and this atrium is the entry to the business section although the design is consistent throughout -- won't begin assembly until next year or have its inaugural flight until late 2007. Delivery will be the following year. Air New Zealand won’t get their two flying the big routes until 2010.

In the meantime there is the 777-200ER, the 300-seaters entering local service in October with new in-flight entertainment systems in their Pacific Economy (which many other airlines already have), new seating and mood lighting.

These aircraft are more fuel-efficient than their counterparts and also have a longer reach than the current 747s. Powered by Rolls Royce engines they could have you in Rio, Seattle or Bejing in a single flight.

Their ovoid fuselage shape allows for greater headroom and the interiors are, we are told repeatedly, bigger all round than Boeing's rival, the Airbus.

Air New Zealand's fleet -- the renovated 747s and the new 777-200ERs -- will be configured into a three-class layout of Business Premier, Pacific Premium Economy and Pacific Economy.

Top dollar gets you a leather armchair in Business Premier which converts into a two-metre long, lie-flat bed.

In the factory these 777-200ERs are being pieced together like enormous, highly polished pieces of Meccano. Over there is the wing section, a football field or two away is the fuselage -- a composite of carbon fibre and re-enforced plastic -- and up ahead is where finished aircraft are given their final, microscopic going over.

When the two production lines are at full pace the 16,000 people working three shifts can turn out seven or eight 777’s every month.

We clamber up into the body of an aircraft which is all hanging wires and mechanical intestines. Workers are installing the overhead luggage compartments which hug the centre and sides of the craft offering more headroom in the aisles.

Outside at this height we can see almost to the far end of the factory. Almost.

We return our safety glasses to the bin by a door and step out into the bright afternoon sun of suburban Seattle. Beneath the highway opposite is a massive underpass where brand new Boeings are taken to the nearby airfield from which they embark on test flights.

Behind us is the biggest building we can imagine.

I take a photograph of the mural of a Boeing in flight on one of the football field-sized doors. It is done in the style of a postage stamp.

The Boeing factory offers tours Monday to Friday at 9, 10 and 11am, and 1,2 and 3pm. Tickets are $US3 for children under 15, and $US5 for adults and are sold on a first-come, first-served basis on site. Reservations may be made in advance (1-800-464-1476) from noon to 3pm. Reservation fee is $US10 and must be charged to Visa or Mastercard. There are no same day reservations. No cameras are permitted, there is a gift store (www.boeingstore.com) at the end of the tour.