The American poet William Carlos Williams had an astute and true observation about travel: “I have discovered that most of the beauties of travel are due to the strange hours we keep to see them.”

There was certainly some bleary-eyed beauty at Parramatta Park west of Sydney as night wheeled towards a red dawn to the sound of cockatoos and rosellas.

And on the way here -- leaving a central city hotel at 4.30am -- the streets were deserted. It sometimes seemed the sole sources of bright lights were the surprisingly numerous McDonald’s outlets which pierced the night with their golden arched glow.

In the hour before dawn a dozen or so cold but alert figures who had arrived at the park -- the site of the original Government House built in the late 18th century -- mingled in anticipation of what would follow.

Then with paperwork done -- important waivers and orders for champagne breakfast on our return to Lachlan‘s Restaurant at Old Government House -- we climbed aboard a bus for another drive to a deserted field in Baulkam Hills.

And there, as we stood in the chill air, our hot air balloon was filled with gas and the brightly coloured object gradually fattened enough to carry us high above the silent suburbs with just a blast of flame and heat. 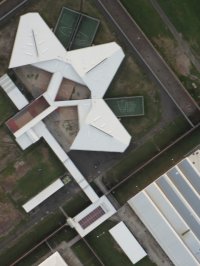 Hot air balloons are a fascinating way to appreciate a landscape. My sole previous experience had been in the Atherton Tableland inland from Cairns and there, drifting above clouds, orderly orchards of pruned mango trees and on to a vista of green and brown, I was struck by the vastness of the view.

But this flight near Sydney is different: it is mostly over suburbs where dogs -- alerted by a high-pitched sound from the gas tank -- bark incessantly. They wake owners who come out to shut them up but, because they don’t look up as we drift silently overhead, can’t figure out what has set their animals off.

And so we float onward, around 800 feet (250m) off the ground and the streets beneath us create their own rhythms and patterns. Some look like songlines for white fellahs.

Over there is an oddly shaped fan-like building (Parramatta Prison, above left), here a church whose symbolic shape is only apparent from this height, and in the distance a white mosque and minaret pierce a bush-clad hill.

From up here these western suburbs look like abstract art as the camera lens frames just a few streets or a baseball diamond. 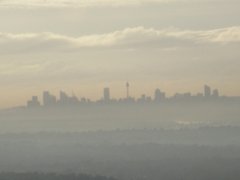 On the distant horizon the tower blocks of Sydney emerge above a haze of cloud.

Up here you can see the hoarder who has a backyard full of car bodies, broken trailers and useless junk, and the new developments which cut hard-edged lines in the rolling hills. Or the piercing shaft of a motorway heading towards the heart of the city in a relentless straight corridor through the suburban sprawl.

Birds glide past, and for a while there is the powerful sweet smell of a bakery.

But mostly it is cool, odourless silence.

We drift on. Matt our pilot takes us down so low I can reach out and touch the tops of trees in a copse beside a stream. Herons take flight from a golf course where sandtraps look like odd bacteria beneath a microscope. Horses and cows below are oblivious to us until there is a rush of gas to pull us up into low cloud again. 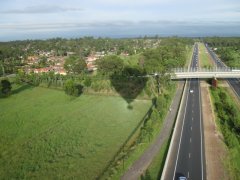 For an hour we let the breath of nature take us where it will, followed by the shadow of our airborne selves.

Matt looks for a landing spot and calls the back-up van to meet us. We bend our knees as the basket bumps gently to earth behind a TAFE institute. Too-cool-for-school students pretend to pay no attention to the bright blue and yellow object now deflating before them.

We happy passengers leap out of the basket, help roll up the balloon and dump it in the trailer. Then it is back for a hearty breakfast on the Garrison Veranda at Lachlan’s.

Marie Antoinette -- who had seen the Montgolfier brothers’ aerial invention at Versailles around the time Australia’s first governor was establishing his residence -- considered ballooning “the sport of the gods”, perhaps because until then only gods could look down on the earth from far above.

So we might perhaps add to what William Carlos Williams observed about travel: Sometimes it is the height from which we see places that reveals their beauties. 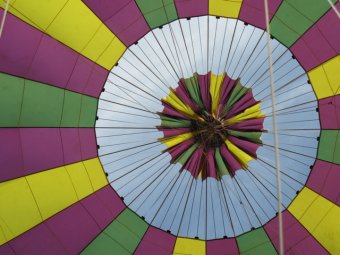 For more information on this flight: