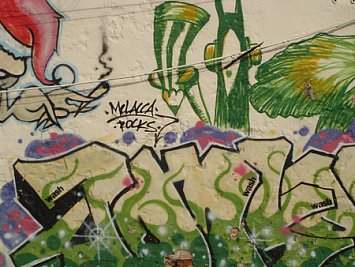 Bong comes out of her busy kitchen in the elegant Seri Nyonya Peranakan Restaurant to explain how she learned the Baba-Nyonya culinary style unique to the town of Melaka, here on Malaysia’s west coast.

“No, they do not teach this in any schools,” she laughs. “You have to learn it from when you are very young. I learned this style from my family in the kitchen at home.”

And this regional style – full of exotic spices and chili, fiery sometimes and subtle at others – draws curious, hungry and gourmet travellers to Melaka (aka Malacca) just a few hours drive from both Kuala Lumpur in the north and Singapore to the south.

Tourism to this town of some 700,000 has been spurred in recent times by a slogan you see everywhere: “See historic Malacca, see Malaysia”.

And there is a great measure of truth in that because Melaka -- bisected by a narrow river and boasting an appealingly shabby Chinatown largely untouched by tourism -- has a fascinating history and the influences of the many cultures are represented here even today.

In the 14th and 15th centuries Indian and Chinese arrived as traders, to be followed in short order by the Portuguese, Dutch and British colonisers, each of whom replaced the former as governors and brought their own influences to bear on the local architecture.

This is a town where a magnificent reconstruction of the restful, cool and wooden Malay-style of sultanate palace is just around the corner from the solid stone Dutch town hall (Stadhuys, painted red as all buildings in the central square are) and beneath the ruins of St Paul’s church built by a Portuguese sea captain in 1521.

Of as much interest to the tourist as the museums showcasing the history of Malay, Hindu, Muslim, Chinese, colonial and other influences on Melaka is the distinctive cuisine which has resulted from this implosion of cultures.

Most famous, but my no means the only culinary pleasure on offer, is the Baba-Nyonya style which chef Bong’s restaurant in the Hotel Equatorial excels.

When Chinese traders arrived at Melaka in the 1400s they married local Malay women. These people -- baba means man and nyonya means woman -- adopted their own style of distinctive and colourful clothing, made striking pottery of vibrant green, yellow, pink and blue enamelware (displayed in the Stadthuys museum in the town square), and of course developed their own cuisine: Baba-Nyonya also known as Peranakan (local) style.

Across the river in the Chinese quarter is a museum dedicated to the Baba-Nyonya heritage.

With Seri Nyonya Restaurant manager Chan and chef Bong offering advice I choose from a long menu – designed by local chef Florence Tan who grew up in nearby Heeren St where she too learned from her family. The chief ingredients include local chili and calamansi (a small, green and bitter lime), various mints, tumeric, galangal (a ginger-like herb), star anise, caradamon and plenty of the Baba-Nyonya staple, sambal belachan which is the blend of fried shrimp paste mixed with chili and lime. 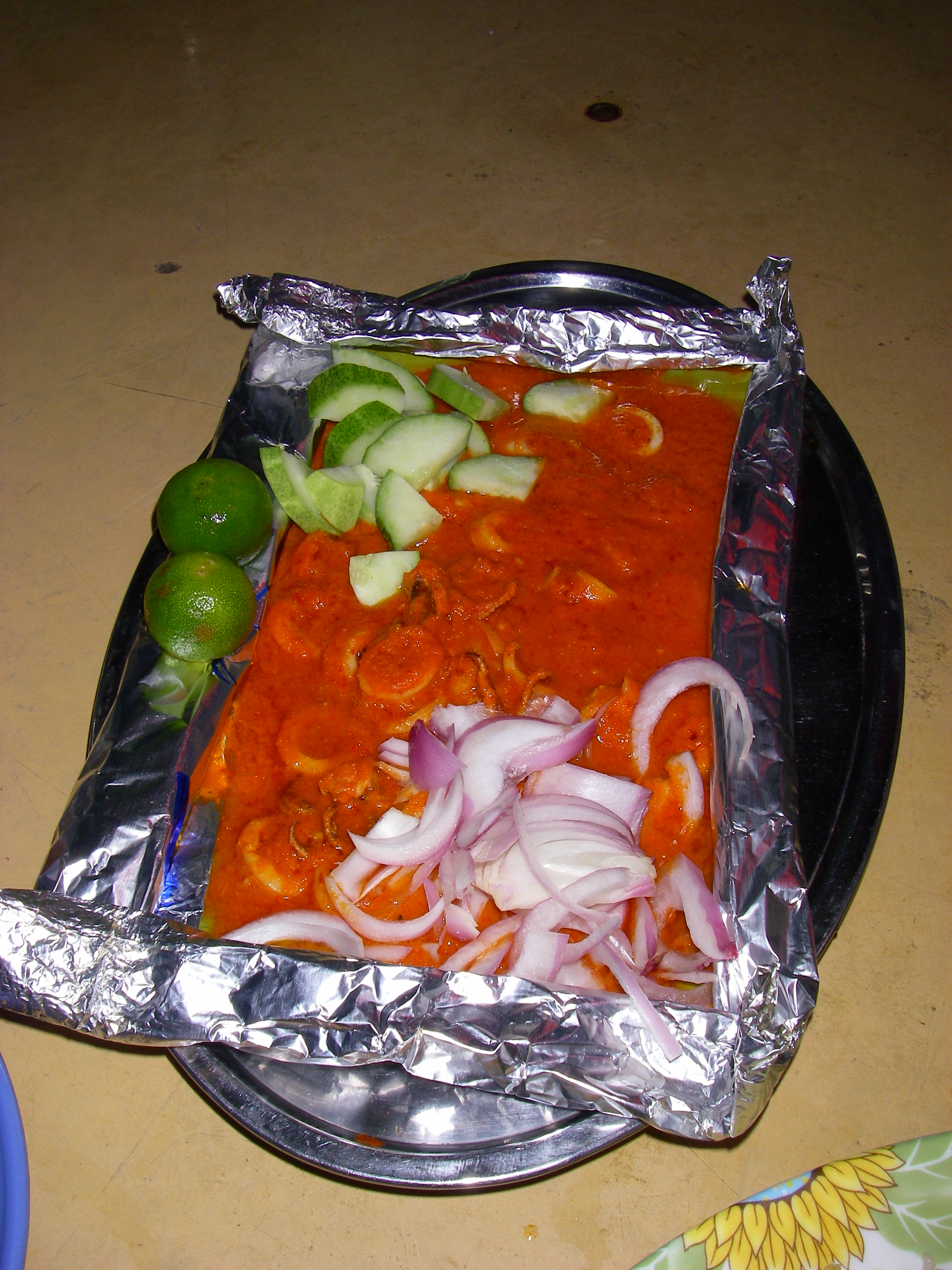 As I learn over this night -- in a stylish restaurant which adopts Malay-style decor of dark timbers and floor seating for those who wish to enjoy a more traditional experience – and in street stalls around the town, this is an especially spicy style of Malaysian food, and one best enjoyed with a cold beer and chilled water.

Among other chili-hot delights Bong offers is udang sambal peta: prawns fried in an aromatic seri nyonya paste with petal, a fragrant wild bean. The paste includes two kinds of chilli (dried and soaked, and diced fresh red chilli) which might serve as a warning to those with sensitive palates or stomachs. But it is flavorsome and the heat ameliorated by shallots and rice, and beer.

Over the course of the meal I am introduced to pie tie (aka top hats) which are entrees of half a dozen crispy pastry tubs the size of shot-glasses filled with finely sliced vegetables including cucumber, with egg and chilli, and a light chili sauce to pour over for extra bite.

The duck soup is pale and comes with salted vegetables and a sour plum for tartness, and there is also an especially delicious agam pongteh: chicken cooked slowly in sweet bean paste with Chinese black mushrooms and potato. This was a standout and Bong cheerfully offers me the recipe.

Later while browsing the attractive menu which is filled with history and facts about Baba-Nyonya, I am attracted to a side order of something called butterfly fish. Bong reappears with a dish: it is a local dried and crispy fish (about the size of a small shrimp) served with slivers of onion and red chilli, and drizzled with palm sugar and calamansi juice. Delicious.

It has been an exceptional meal – aromatic, lively in the mouth, fresh to the taste and fully satisfying. And the entrée, three small mains, the butterfly fish and rice has cost only $NZ42, which includes the two beers.

Of course value for money seems to be the hallmark of Malaysian food and in Melaka the casual visitor is spoiled for choice when it comes to even cheaper eats.

Directly outside the Hotel Equatorial and Bong’s restaurant are roadside stalls at the roundabout which deliver filling Malay dishes from noodle soups to satays (and nothing costing over $NZ2.50). This is an ideal if noisy rest-stop during the day to have a light bite and fresh, chilled palm sugar drinks and watching the passing parade of motorbikes, trucks and school children (the girls in headscarves, the wilting boys in white shorts and ties loosened in the heat).

There are also numerous small places along the riverbank in the centre of town which, if it isn’t exactly Venice, is at least untroubled by trucks. Place here are almost embarrassingy cheap: nasi lemak which is coconut rice, half a boiled egg, coolling cucumber slices, roasted peanut with dried anchovies, and chicken in a spicy sauce come in at something around $NZ1.50. They serve such welcome delights as freshly squeezed iced lime juice with a salted plum (about 75 cents) and the coffee with condensed milk -- a common blend in various parts of Asian -- is superb.

You could happily eat your way around central Melaka between visits to various museums, the enormous Chinese cemetery on the edge of town (the largest outside of the mainland), and exploring old Chinatown. And eat there too in cheap shophouses on low plastic stools: Chinese noodles with sliced dried pork and sweet crispy pork pieces on fried rice for $2 is hard to refuse. Starting the day with chicken congee (chicken soup with soft rice) is a quick immersion into Melaka’s cuisine.

But just beyond this town – which is unfortunately cut off from the nearby Malacca Strait by development and awkward, if not far, distance – is one enclave that the gourmet and gourmand alike would be unwise to miss: Kampong Portugis which is about 4kms from the centre of the city along the coast.

For the price of a postage stamp in New Zealand a battered and uncomfortable local bus (no 17) will take you close enough for the final 200 metre walk to the forshore where what appears to be a large carpark opens up. Around the perimeter are a dozen or so small eateries (the word “restaurants” would elevate them) and here in the evening locals and a few tourists settle in at plastic tables to enjoy the plentiful helpings of seafood dished which owe something to the small Portuguese-Indian community who settled in this place, and to endure classic hits radio through the tinny speakers.

But the food served on garish plastic plates is so exceptional you can even forgive Eric Clapton for Wonderful Tonight. The food, if not the song, is.

The signature dish, if we might call it that, is devil’s curry (yes, it is "hot-hot-hot" as that annoying songs says) but here too are soft and fleshy ginger clams served in lemon and lime juice, baked cuttle fish lavishly covered in a thick spicy sauce, chilli-hot prawns sambal, numerous and various vegetarian options, and a view of the Straits of Malacca at dusk. 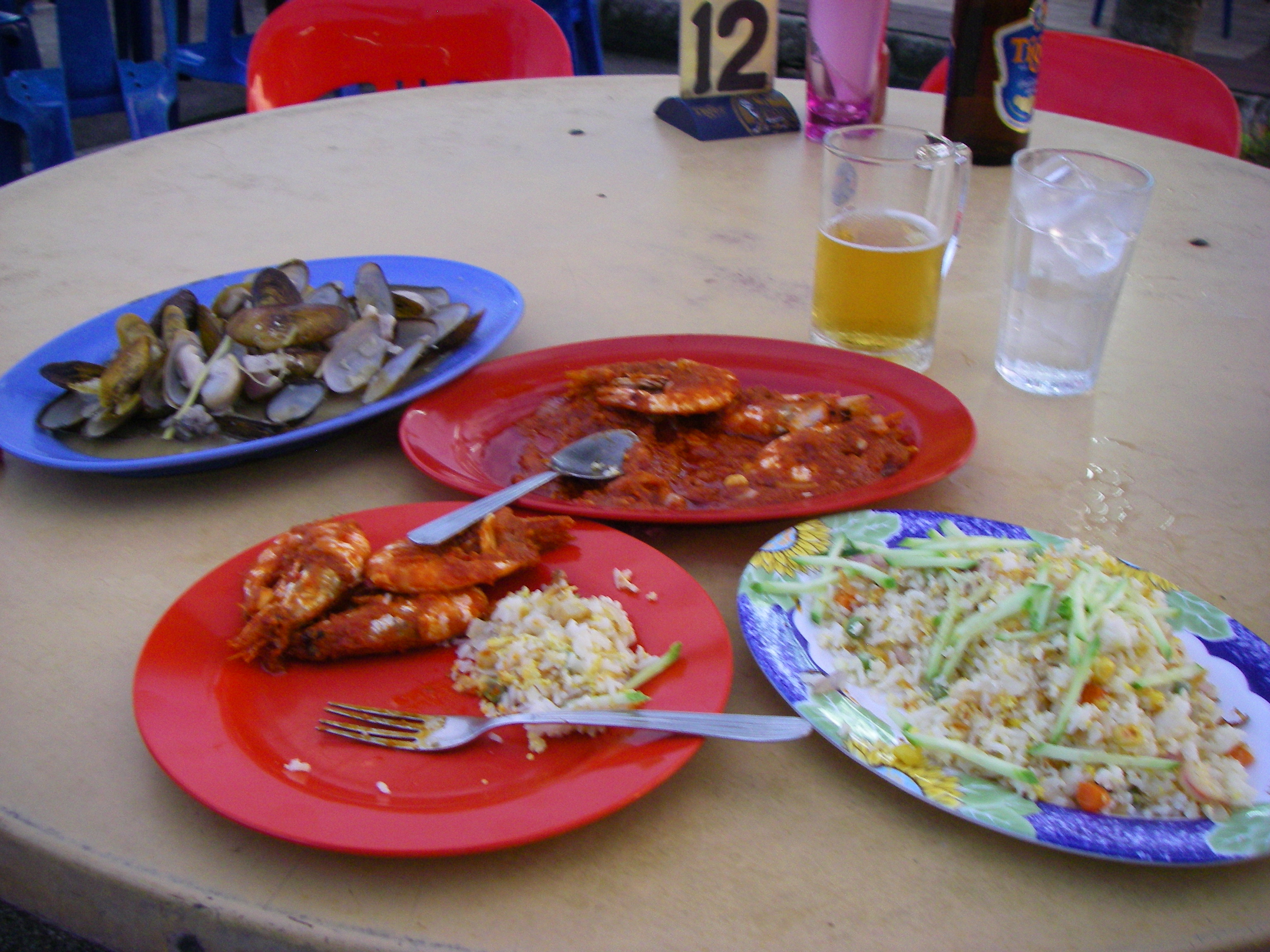 My night out which included four dishes, two large beers, a bus there and taxi back to town cost only $NZ35.

Melaka is a friendly and fascinating town with a unique history it tries to accommodate in a sometimes uncomfortable mélange of unadorned authenticity and reinvention for tourists.

There is some kind of light and sound show which I neatly sidestepped, but the bizarre expressions on the faces of some mannequins in the palace which model traditional costumes deserve to be enjoyed at leisure.

Melaka accommodates travelers of all budgets too, from large hotels such as the Hotel Equatorial through a Holiday Inn and down to the cheap and rough-edged guest houses in the Chinese quarter.

In Harmony Street -- so called because it has a mosque and Chinese temple within a few doors of each other -- I paid around $NZ7 a night for a bed, a mosquito coil and a fan – the call to prayer at about 4.45am, the music from the temple half an hour later, the old man across the alley spitting from 6am and then dogs barking came at no extra cost.

But I wouldn’t have missed that experience either.

So from high end to backpackers, Melaka is worth a few days detour from Kuala Lumpur or Singapore, especially if you like to eat and are prepared to let your palate have a journey of its own.

To eat Melaka is to eat Malaysia. And then some.

There is an alternate version of this "to eat Melaka" story under The Nightmare From Down Under. Read it be warned! 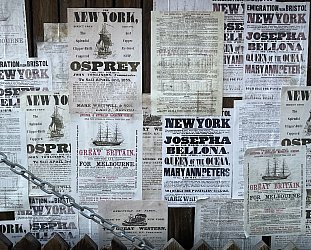