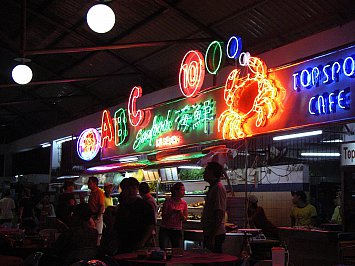 “This is my kind of Malaysia,” says Bob from laidback California as we enjoy Tiger Beer at the James Brooke Bar and Bistro near the relaxing riverfront in Kuching.

“It’s got just the right mix of a quiet old town and all the modern amenities.”
We clink icy glasses in agreement.

Like me, Bob had travelled down Peninsula Malaysia from Kuala Lumpur, through Melaka and Singapore -- he also took in tourist hotspots such as Penang and Langkawi Island -- and we have both fetched up here in historic Kuching, glad to be in this city some 13 kilometres upriver from the coast of north west Borneo.

When colonial entrepreneur James Brooke -- who unwittingly gave his name to this airy, bungalow-style bar with its view across a lush garden to the river beyond -- arrived in Kuching it was an August morning in 1839. It was a day when, according to his biographer Robert Payne, “everything shimmers, when the blue sky is filled with blue pigeons, and when the great blue mountains of Matang in the distance seem to have been carved out of ice. Even the pathetic little town looked delightful in the early morning sun”.

Kuching -- the name possibly taken from the Malay word for cat, which accounts for the quirky cat sculptures around the city -- is no pathetic little town these days. It has a population of around 500,000 although possesses the leisurely pace of a much smaller city, especially around the river where at night people stroll slowly, food stalls sell local dishes (and beefburgers) and small ferries (tambang) ply the Sungai Sarawak taking people to the opposite shore where 125 years ago Brooke built Fort Margherita to protect the town from marauding pirates.

Under Brooke -- who by adept negotiation and sometimes brute force wrestled land off the Sultan of Brunei and local tribespeople -- Kuching flourished as a regional centre. He became known as The White Rajah of Sarawak, creating a dynasty which ruled this region for a century. Under the Brookes’ regimes a sometimes fragile peace was negotiated to allow the numerous races -- Malay, Chinese, Indian, local tribes, Europeans -- to coexist.

A short walk from the busy shopping and restaurant area -- popular with tourists for its proximity to major hotels such as the Hilton, Crown Plaza Riverside and Holiday Inn Kuching which have views up and down the river -- are museums to Sarawak culture, the Chinese influence and Islam. The cats get their own too. Here also are small galleries selling indigenous arts.

But we cannot live by culture alone -- and the Top Spot is a popular local seafood terrace where the substantial meals are cheap and the fish is fresh from the ocean. Just below it is my pick for the best bar in Kuching, the quietly sophisticated Garden Hill which offers a welcome retreat from the heat of the evening.

But there is another Kuching: along Jalan Abell and Jalan Padungan to the south of the tourist centre the plastic tables from small, cheap eateries -- Chinese, Indian, Malay -- spill onto the narrow footpaths. These modest places serve delicious food and very little requires anything close to 20 ringgits (about $NZ7.80).

More than just a cheap, historic getaway city however, Kuching is a gateway to the famous national parks of Bako, Kubah and Gunung Gading, all within a few hours from the city centre. Their exotic wildlife, walking trails and rare plant species are attractions in themselves.

Then there is the dense jungle of the interior, the dark muddy rivers which course through it, and the indigenous people who were headhunters only a century ago.

Early one morning Richard picks me up in mercifully cool car and we drive from Kuching to the Lemanak River, about a six hour journey which includes stops for sweet coffee and a look at the market in attractive smalltown Serian, and lunch at a shophouse village.

Mid-afternoon we are scrambling down a muddy bank into a longboat for a 20 minute trip through thick jungle where vines and branches hang to the waterline. We are heading up-river to stay the night with the Iban people who have worked this land for centuries, and in whose longhouse -- which is home to some 24 families, around 150 people -- three blackened human skulls still hang.

As it turns out Richard -- a local who speaks their dialect -- and I are the only guests for this night during which I chat (through Richard) to the shaman Unting and the old headman whom Richard so respects he only refers to him as Tuairumah, chief of the house.

We have arrived before monsoon season -- although seven hours of constant rain from 3am forces us to travel down-river the following day in just our underwear -- and the Iban are harvesting the local pepper and clearing the forest to plant rice. Although people up the Lemanak, and there are about 20 such longhouses in this area, are seeing an increasing number of tourists they still maintain strong ties with the land.

I note the longhouse seems occupied by old women, young mothers and children, and the senior men. The young and middle-aged men are out working the fields in the 35 degree heat and at night retreat to their rooms behind the rattan walls. Not many are unhappy when rain comes laughs the old shaman, it means a morning in bed away from backbreaking toil.

That night I join the men drinking rice wine.

After a night on a bare mattress and beneath a mosquito net an old man shows me how to use a blowpipe -- easy and accurate, but I wouldn’t want to rely on my skills to provide a meal -- and we watch the river rise as torrential rain washes in torrents through the corn and betel nut.

Within a 20 minute boat ride we will be a world away from these friendly but formerly fierce people, and half an hour more down the road we will be back in the land of shophouses, high schools and fast cars.

That night I am back in Kuching, marvelling about this rare experience in the Iban longhouse, the wise and laughing eyes of the 87-year old shaman, the tattoos on the bodies of the old men . . . and that they had television coverage in such a remote region of Sarawak near the border with Indonesian Borneo.

I make my way down to the riverwalk again, watch a beautifully costumed young man play an odd stringed instrument, and fritter away an hour over a beer as tambang chug across the river.

I see Bob carrying what a souvenir wrapped in newspaper. I give him a thumbs up and he returns the gesture with a huge smile.

Kuching was our kind of town.