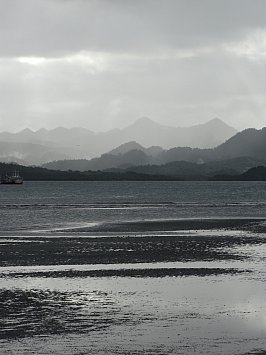 Give them credit, they were persistent.

When the Reverend Thomas Baker, a Methodist minister, unintentionally insulted a chief on the Fijian island of Viti Levu in 1867, he and six of his Fijian followers were hacked to death and eaten.

Baker has the dubious honour of being the only European Methodist to be dispatched in such a way.

And the people didn't stop with him. The story goes they also tried to eat his boots, bits of one being on display in the Fiji Museum just 10 minutes walk from downtown Suva.

Here is a glass case you may also see Rev. Baker's Bible, the bowl he was served up in and a large wooden fork.

Suva's small but fascinating museum offers an insight into many and often confusing aspects of Fiji's social, religious and political history, among them that 19th century missionaries spread the idea Fijians were descended from Egyptians. This lead to a local paper in 1892 telling of the journey from Thebes up the Nile to Lake Tanganyika and then on to Fiji in the Kaunitoni canoe.

There are many such marginalia in the museum but the visitor is greeted on entry by the impressive out-rigger Ratu Finau -- “the last Waqa Drua” (ocean-going canoe) – of 1913 which has a main hull 13.4m long and massive steering oars which needed four men – four Fijian men, remember – to operate.

This, we are told, “is a relatively small canoe in comparison to those from the 1800s”.

The museum not only offers artefacts such as 3000 year old Lapita pottery and distilled history (how the population fell from 250,000 to just 85,000 between 1800 and 1921 through the ravages of imported European diseases), but oddities of specific interest to the New Zealand visitor.

Here is a 1991 wedding dress made of masi (tapa) by New Zealander designer Annie Bonza, and Maori designs are incorporated into Fijian carving.

Then there is the bamboo fishtrap which coincidentally looks like a vuvuzela and is called a “vuvu”.

A day in the Fiji Museum is one well spent, and just getting there is an interesting walk from downtown cosmopolitan Suva and its multi-ethnic shops, traffic (not as laid back as the stately walking pace of its citizens) and jigsaw of architecture from handsome colonial to odd Art Deco and 70s embarrassments.

The museum is located in Thurston Garden with a large clocktower dedicated to the first mayor of Suva G.J. Marks who was drowned in the St Lawrence River, Canada in 1914 when the SS Empress of Ireland sank.

The garden, a steamy blend of unconstrained tropical growth and manicured areas, is a perfect place to take some time out of sprawling Suva which has a population in the greater area of around 500,000.

And it is opposite the playing fields of Albert Park.

If World Cup football matches are won in the academies of Europe, then the Rugby Sevens' training ground is a place like Albert Park where athletic schoolboys bail out of the back of a truck, sing a hymn then play finger-tip, passing rugby at great speed, with slamming body contact and no time wasted for injury stoppages. It is something to see. 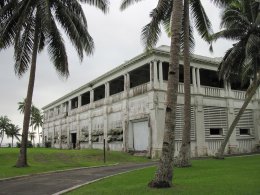 Nearby is also the ghost of one of the saddest of Suva's old buildings, the harbourside Grand Pacific Hotel which is now an abandoned and neglected ruin. Resurrected and renovated it could be the Raffles of Fiji, but today young soldiers use it to camp in and lounge around lazily.

I asked if I could look inside, was waved on with a smile, and the young soldier accompanying me and I bemoaned its condition as we stood in the grand hall looking at the blue ocean beyond.

The presence of soldiers reminds you that despite the business-as-usual all around you, politics is inescapable in any discussion of present-day Fiji.

But here the museum is also useful in that it offers the long view of Fiji's troubled history since the early colonial period. 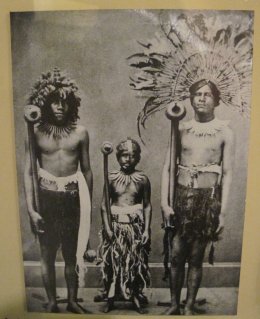 There you may read of the Kingdom of Fiji and the short-lived Cakobau Government (1871-74) which printed its own paper money in the years before the country became a British colony; of the shameful “blackbirding” (coercing or kidnapping of people from other islands, notably the Solomons, to work on plantations); of the dwarf priest (pictured left with two warriors and the pickled arm of a slain chief) who was sold to Barnum, Coup and Costello's American circus to raise funds for the government in the late 19th century; of the indentured labourers from India (the practice only officially ended 100 years ago) . . .

And of Moy Bak Ling (pictured with his extended family) who went from Duan Feng in China to the Australian goldfields as a 17-year old but fled the appalling conditions three years later and sailed solo to Levuka in 1855. His carpentry shop was the first Chinese business established in Fiji.

Today, a kilometre or so from the museum, the Chinese government is building an enormous new embassy behind towering walls and using labourers brought in from the mainland.

The flags of China, Taiwan and Korea wave over aid projects, the Americans have an equally large embassy and visible presence.

Politics is everywhere and visitors will make what they will of it as daily life goes on, although aspects of the unhappy past inevitably inform the present. 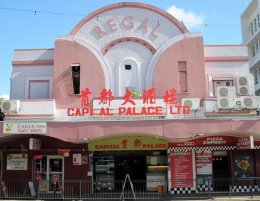 So the museum is not the only place you can feel Fiji's complex story. You can see it reflected in something as simple as shopfronts in Suva, such as the old Regal on Victoria Parade which, in what must have been a cinema with a suggestion of Art Deco in its graceful curves, now houses a Pizza Express, a cake shop and the Capital Palace Chinese restaurant.

It is right next to a McDonalds on the edge of Ratu Sukuna Park.

In that one small corner of downtown Suva you can read the names and feel something of the complex, interlocked past and present of this interesting city.