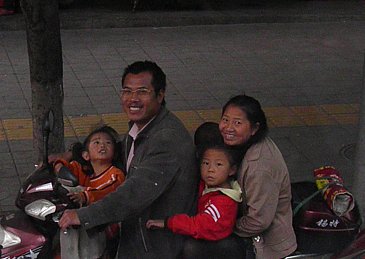 Sometimes it is the small things rather than the grand sights you remember after a trip. Around the bustling city of Kunming, the capital of Yunnan province, there are certainly sights to be seen – the expansive Yunnan Ethnic Village to the south, the wonderful landscaped gardens at the World Horticulture Exposition in the north east.

But my recollection was also of the small gestures which said so much about the people and the hospitality afforded visitors.

One afternoon when coming back from those gardens I took a thrilling taxi ride through narrow lanes and down broad roads where cars, trucks, buses, scooters and pedestrians all seemed to jostle for space. It was hilariously exciting – I never felt fearful – and at the end I went to pay the driver.

The fare was 17 yuan (about $NZ3.50, a tiny sum for such a memorable ride) and I handed over 18. The driver went to give me my change – a mere one yuan which wouldn't buy me a biscuit back home – and I waved it away with a smile of thanks.

But he was most insistent that I get my change, meagre to me as it was.

And then I remembered a similar thing had happened on the way to the gardens. My driver then had made sure I had exactly the right change before I got out of the car.

These may seem small and inconsequential things but they were emblematic of the honesty, generosity and a feeling of welcome I had while making my own way around sprawling Kunming where only once did I see another European on the streets.

My Chinese language skills are woeful – an approximation of “Hello” and “Thank you” at best – but at the fascinating old world Provincial Museum, in small eateries and shops, in taxis and while drifting aimlessly through those gardens and the Yunnan Ethic Village I was greeted with smiles of welcome, waves and occasionally the request for my photo to be taken.

I loved it all.

It is a commonplace for travel writers to observe that journeys are all about people, but then we – because I am one of them – end up writing about those grand sights and the voice of the people seldom comes through.

My encounters in eight days in south west China were all marked by a generosity of spirit that can seem so rare in many places. And there was no gain for people to wave at me, help me negotiate an entry fee or point me in a direction when I stabbed at a map and shrugged helplessly. The people I encountered – young and old, men and women – all went out of their way to accommodate me.

When buying a beautiful blanket at the dramatic Stone Forest on afternoon, the old lady selling them actually did the bargaining down for me.

Like my taxi drivers, she seemed to want to be scrupulously fair and not take advantage of me.

That is such a rarity that it is memorable. We laughed and clapped our hands with delight, and I have a beautiful hand-sewn garment which is a memento of the moment. The encounter will be with me long after the blanket has gone.

It was as memorable as those grand sights – and when people ask, as they invariably do, “So, how was China?” my description of the wonderful things I saw comes in second to other stories.

About a taxi driver who insisted on the smallest of change, the old man who gently took my arm and guided me to the cable car entrance at the Expo Garden, the schoolkids who giggled and laughed and crowded around me getting their photo taken then ran of with shouts of “Thank you, thank you” . . .