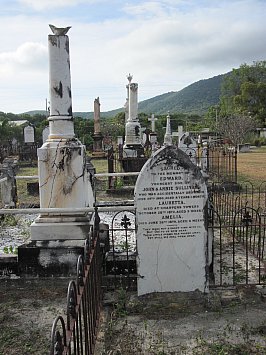 It's a curious thing, but the quiet of a cemetery can tell us as much about a town as the living residents gabbing over drinks in a late night bar. There on moss-covered and often damaged headstones are the spare, telling details of lives which can speak to us of long-gone days.

Even more than a chat over over schooner in a local pokie bar, at pleasant, orderly and somewhat sleepy Cooktown, five hours drive north of Cairns and at the base of the Cape York Peninsula, I learned more about the place at the graveyard just outside town.

Pioneers here may have lived and worked together, however when it came time to pass on they went their separate ways. Over here at the entrance are the Irish Catholics, over there other Christians, and down a trail at the back is a shrine to the Chinese from Guangdong province who came with the gold rush in the 1870.

It is estimated some 18,000 Chinese – mostly males – arrived in Cooktown in the four years to 1877. They outnumbered the entire European population of the northern part of Australia. 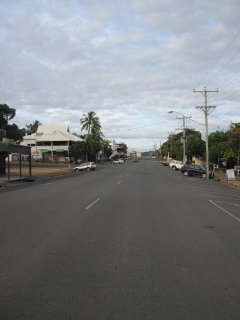 Today Cooktown's population is just 2000 but the wide streets, good hotels and picturesque harbour are testimony to the anticipated tourist boom which has yet to happen.

And that is also the appeal of this place where Captain Cook first set foot on the continent. As a tourist you feel you have it to yourself. You relax, walk slower, rise later and slip into the more leisurely pace of the locals.

I certainly did. And then I went to the place where the pace stops dead, literally.

History oozes out of every corner of this town where a century and a half ago there were once 50 hotels. Today there are three, among them the West Coast Hotel here on the east coast. (Needless to say there is a story attached, with a New Zealand connection).

There is also the much renovated and sophisticated four-star Sovereign with its spacious bar and restaurant, and tree-lined pool between the comfortable rooms.

Given that some of the inlet's local inhabitants are ferocious – the crocs – you can't swim in the river so on a hot day, and it can get very hot this far north, that pool is welcome.

Back in 1949 a cyclone destroyed much of the original Sovereign and so it became known as “the Half Sovereign”. 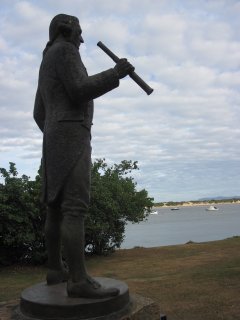 It stands opposite the historic old Post Office, not a stone's throw from the statue of Cook who hauled Endeavour up here in 1770 for repairs after it hit a reef. In the former St Mary's Convent – an impressive 1880s on the rise behind the main street – is the James Cook Historic Museum which tells Cook's story as well as that of the local Guugu Yimithirr people.

It was near Cooktown that Joseph Banks wrote the first European description of a kangaroo: “I myself had the good fortune to see the beast so much talkd of, tho but imperfectly; he was only like a greyhound in size and running but had a long tail, as long as any greyhounds; what to liken him to I could not tell, nothing certainly that I have seen at all resembles him.”

Here in the impressive museum is one of Endeavour's enormous anchors, deftly painted Aboriginal spears and shields, and household items from the colonial period alongside Aboriginal adzes, colourful collections of shells, old portraits and terrifying medical equipment from a century ago which must have had the effect of keeping doctor's visits to a minimum.

The modern gallery space – which also houses one of Cook's cannon and the Endeavour Tree where the vessel was tied to for the 49 days of their stay – has exceptional displays of first hand accounts of the interaction between local Aboriginals and the Europeans whom they welcomed, albeit cautiously. Later relations between the indigenous people and settlers were not so peaceful.

Up beyond the museum is the famed Nature's Powerhouse, the 62 hectare botanic garden which draws most tourists for its diverse specimens, cafe and the gallery of delicate botanic illustrations of the extraordinarily gifted Vera Scarth-Johnson.

Cooktown may seem pleasantly relaxed today, but it suffered considerably in its short life. After the gold rush the population drifted away, there were devastating fires and cyclones, and during World War Two most people were evacuated. Many Aboriginals died when moved from their lands. At the cemetery an older sad tale is told in just a few words on a headstone. She was white and living with the local Aboriginals as one of their own. She spoke no English, no one knew of her origins and she simply became known as The Normanby Woman. She was taken from her people, brought back to “civilisation” (the headstone has inverted commas) but could not adapt and died a year later in 1886.

Such stories, and those of discovery, conflict and the tragic lives played out are comon in the area.

Yet today – still waiting for that invasion of tourists which is just starting to happen since the sealed road to Cairns was put in five years ago – Cooktown offers an escape from haste, a fine spot for some serious fishing, decent restaurants (the memorably named Gill'd and Gutt'd is for excellent takeaway fish'n'chips to eat in the riverside park at dusk). And there are friendly folk in bars, and at the bowling club where you sign in at the door, grab a beer and introduce yourself

Cooktown is also the gateway to that remote and ruggedly beautiful Far North. For a small town it has a lot to recommend it.

You also get to take a photo of a low ridge not much bigger than an ignorable Auckland volcano.

From the school of "so spare it's barely there" comes this delightful, melodic and restful debut solo album by the Norwegian pianist Balke, here improvising through 19 short pieces (the... > Read more