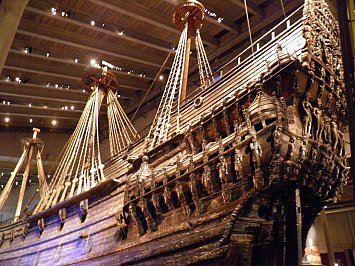 Compared to the maiden voyage of the Vasa, the ill-fated Titanic enjoyed a pretty good first outing a century ago. At least it got in four days of plain sailing before hitting the iceberg.

The ornately decorated warship Vasa set out from Stockholm and was little more than 1200 metres into the harbour when it was caught by a gust or two, rolled onto its side, took water through the cannon ports, and – before a huge Sunday afternoon crowd which had gathered to watch – went straight to the bottom taking with it about 50 poor souls.

Even more remarkable however than its sudden sinking on August 10, 1628 is just why it happened, and how the Vasa – after 333 years on the bottom – was resurrected from its watery resting place largely intact.

These days it takes a very proud place in a purpose-built museum in Stockholm and is understandably one of the world's most visited tourism sites. 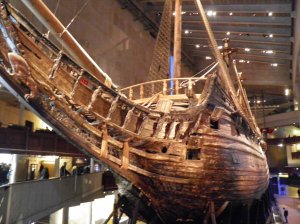 It is a breathtaking object to behold – I bet I wasn't the first big kid who walked through the cleverly darkened entry to catch sight of it dramatically illuminated, gasp in awe and then say “The Goonies” . I heard another, somewhat smaller kid, say excitedly, “It's like Pirates of the Caribbean”.

Yes, the astonishing Vasa looks like a real sailing vessel of the old kind with tall masts and masses of rope, broad wooden decks, cannons, beautifully intricate carvings and, best of all, a sense of mystery.

The reason why the Vasa went down in a light breeze is obvious when you stand at the stern and looks at its proportions. It was far too top-heavy. 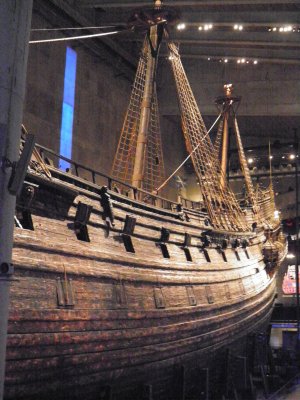 For that fatal design flaw we must look to King Gustavus II Adolphus who approved the innovative dimensions as well as insisting it stock more heavy cannons, the Dutch builder Henrik Hybertsson (who died the previous year while the vessel was being built) and Admiral Klas Fleming who watched a capsize test (men running back and forth across the deck while moored) and said nothing about the fact the thing nearly flipped even before it hit open water.

The Vasa was huge for its day.

It required the felling of over a thousand oaks for its construction, was 69m long from tip of bowsprit to stern and 11.7m wide, and its 64 guns were to be manned by 300 soldiers.

On board for that short journey were about 140, including sailor's wives.

It was also dressed to impress with elaborate and vividly coloured carvings of emperors and savages, roaring lions and Roman gods. 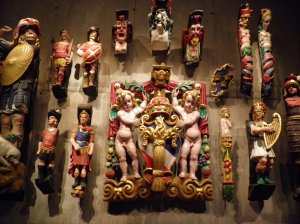 It must have looked wonderful – until it fell sideways and slid to the bottom.

In a twist which sounds alarmingly contemporary, when the verdict of the enquiry came in no one was found to be at fault. The king and others were out of town when the judgment was handed down.

Attempts to salvage the vessel began almost immediately but efforts failed, although 30 years later most of the guns were salvaged using a primitive diving bell which looks like little more than an upturned bucket.

But until the 1950s, the Vasa remained undisturbed, not even by the destructive shipworm teredo navalis, because the Baltic is less saline than the open ocean. And so, remarkably, much of the hull and many of its contents survived, preserved in silt.

When it was finally raised in 1961 – after five years of dives in freezing black water, careful excavation to allow cables to be threaded beneath the hull and some reconstruction to make her watertight -- she rose like a ghost bringing art treasures, sailors' belongings and material for archeologists to pour over for decades. The early 17th century arrived in our time remarkably intact.

Preservation of the Vasa and its elaborate ornamentation was by spraying them with a mixture of water and polyethylene glycol (to replace the water in the wood) at regular intervals. Today however she seems to float in the cool air of the Vasa Museum, her story from construction to salvage told through an instructive film, photographs, mannequins, reconstruction models and relics.

For anyone with a skerrick of the sea in their blood, the exotic, mysterious hulk of the Vasa is an object of reverence. 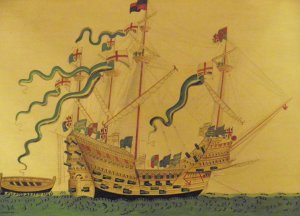 And the techniques of preservation learned on it have been used in other salvages, notably that of the Mary Rose which, like the Vasa, went down before a crowd who had gathered to watch her see off the French navy on the south coast of England in 1545.

The handsome Mary Rose – launched in 1511 and a veteran of many battles – listed suddenly and, like the Vasa, took in water and sank within minutes near the entrance to Portsmouth Harbour.

Unlike the Vasa however, the Mary Rose – pride of Henry VIII's navy and named after his sister – rolled on her side and so the upper part fell victim to water movement, shipworm and fungal attack.

A few years after the Vasa was raised, divers began work on raising the Mary Rose which finally reached the surface in 1982.

The remains of the hull – like half a skeletal chest of ribs – have undergone similar preservation and today she is being prepared to be housed in a purpose-built, mussel shell-like museum beside Nelson's HMS Victory in Portsmouth's Historic Dockyard to be opened at the end of the year.

As with the Vasa, she will come with explanatory photographs, books and DVDs which allow this microcosm of history to live again.

These remarkable vessels are emotionally powerful physical presences which speak silently to us across the centuries. And let's not get started on that bronze age boat in the museum at Dover.

That's a ghost ship from a whole other millennium.

For information on the Vasa in Stockholm see: www.vasamuseet.se

For information on Portsmouth and the Mary Rose Museum see: www.visitportsmouth.co.uk and www.maryrose.org