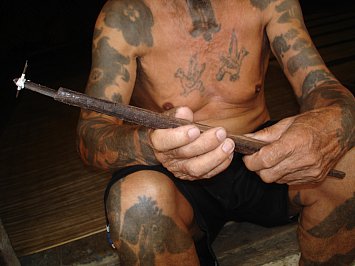 In these minutes before you realise how foolish you are being, you could imagine yourself as Martin Sheen going up-river to seek out the mad Marlon Brando: the prow of the longboat pushing through muddy water; humid jungle steaming its way down to the riverbanks; bowing branches and vines hanging so low you sometimes have to duck beneath them . . .

The sudden and unexpected clearings, smoke from unknown fires exhaling through the jungle canopy, and a fleeting glimpse of a wooden hut on stilts. 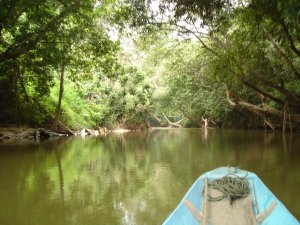 A shadowy figure disappearing between an impenetrable barricade of trees . . .

This is central Sarawak, some six hours drive on an increasingly deserted ribbon of road from the capital Kuching to the Lemanak River near the border with Indonesia Borneo.

It hasn’t been an entirely pleasant trip as my Malay driver Richard -- which I take not to be his real name -- has performed a highly focused form of toiletry all the way.

He has scraped his ears and picked his nose with force and diligence, and then for the last few hours shaved as he drove. This has involved him feeling every pore on his face and, on locating tiny stubbles of hair invisible to my eyes, used a pair of tweezers to extract them. Then he has scrutinised his face in the rear-view mirror, and commenced the unpleasant and unsociable process again.

After about four hours of this I have given up trying to divert him with conversation and have gazed out at jungle and fields, wild orchids by the roadside, the ragged thatched huts in rain-splattered paddies of rice, and a military base protected by walls and barbed-wire.

But the discomforts of bearing witness to Richard’s grooming are going to be worth this drive because -- after my sweat-drenched up-river journey later, from a slippery landing beneath the shabby village of Sebeliau -- will be to a longhouse of the Iban people. 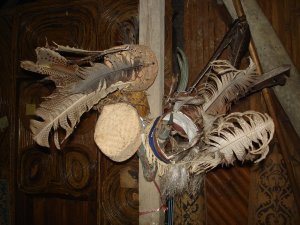 Within the living memory of their elders these people were headhunters, a practice most texts say ended in the 1930s. But Japanese soldiers fleeing Kuching at the end of the Second World War fell to arrows and blow-darts poisoned by the sap of the Ipoh tree, and then the cutting blade of the people of this region.

Indeed, three blackened skulls (right) hang in a basket from a roof beam in the Serubah longhouse which holds 20-odd families and around 200 people. The families here share a common area which disappears towards a distant point lost in the darkness inside the wooden walls.

I am the only visitor to this longhouse and Richard tells me that today among these people the young have embraced Christianity. Kitsch blonde Jesus 90210 reproductions on the wall of some homes within the longhouse attest to this -- but many of the older folk still observe traditional practices. 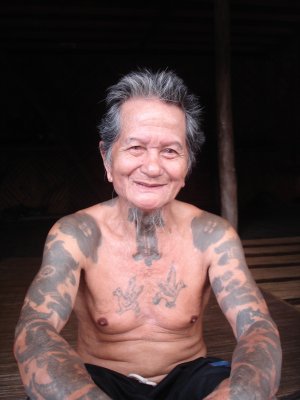 I am introduced to Unting, the shaman. He is a wiry, witty (at least in translation) and wise-looking 87-year old who cheerfully explains his many blue tattoos: the traditional hibiscus flowers and the facing hornbills on his upper chest because they are the symbols of Sarawak, the snake on his leg came from three years on Sabah to the north.
"Rain all time, long time,” he says through Richard. “Because I have no things to do I have these.”

He laughs and points to the thick markings beneath his chin and down his throat. They are for protection, he says with a warm smile, but were the most painful.

He shuffles off and returns with tattoo instruments -- darning needles tied to the end of a stick which are tapped into the flesh much as is done in Samoa.

Later a handsome and lean man also in his 80s introduces himself. He is so revered that Richard, who speaks this dialect, refers to him only as Tuairumah, chief of the house.

When Tuairumah shakes my hand I can’t help notice the large and expensive-looking watch on his other wrist.

He tells me I am welcome in the place of his people, and they are pleased to share what they have.

And that seems considerable. The land around the longhouse is productive: corn, bananas, cucumber, the ever important betel nut still favoured by the old people, the distinctive black Sarawak pepper seeds which are drying in the heat of the afternoon sun on the long veranda, rubber tapped from trees . . .

Blue-brown smoke across the river, rising as a massive and menacing cloud, drops flecks of ash on the longhouse all afternoon -- and is evidence of an another important crop.

And a problem with the neighbours.

All through this region local people are felling and burning the jungle to plant fields of rice, a rotation crop which accounts for those sudden clearings on the journey up-river.

By nightfall the sky has an insipid yellow glow above the jungle canopy and the women in the longhouse are engaging in an animated discussion. 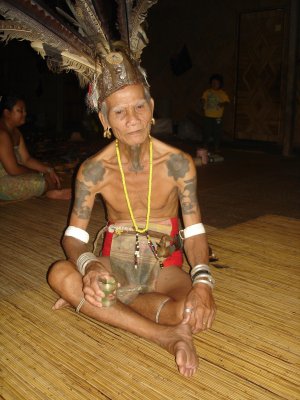 It seems people from nearby longhouses are burning the nearby jungle for a rice field but haven’t asked their permission. The consensus among the womenfolk is that Tuairumah and others will need to have a council with them.

There is much gesturing -- the headman’s wife the most visibly agitated. She talks at her husband for many uninterrupted minutes then leaves.

The old man looks weary as we drink fermented rice wine. Women and children disappear behind the rattan walls to their homes, the old men sit and sip. There is much nodding and head-shaking but very little is verbalised. I nod too. They nod at me, an accepted stranger in their company.

This longhouse has another source of income beyond crops: an increasing stream of buses from Kuching bring tourists into this region.

Late in the day while swimming with the children I have seen groups of middle-aged, camera-laden visitors in the narrow boats ploughing up the swiftly flowing Lemanak to other longhouses on this stretch of the river.

The children wave furiously and smile their grills of perfect teeth, and have their photographs taken by zoom lenses. Maybe back home in Berlin or Boston as they recall their trip up the dirty river these visitors might look at their photographs and wonder who that strange white face amongst the nut-brown children belongs to. 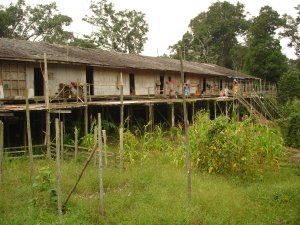 It isn’t a comfortable journey up-river, the Lemanak can be unforgiving: sudden eddies appear, there are patches of ominous calm, huge tree stumps rear out of it dramatically at odd angles, and there are unpredictable depths and shallows judging by areas where the surface churns for no apparent reason.

As we sit on the veranda in the strength-sapping humidity Richard tells me of the four German tourists in a longboat which capsized: the two women managed to hold onto low vines until they were rescued -- but the two men had raincoats over their life-jackets and were dragged down the river.

Their bodies were found three days later and the Iban wouldn’t use this important section of their river until a shaman could release the troubled spirits.

These ancient practices appear to remain uncompromised by tourism. Although the desultory performance of the hornbill dance for my sole benefit by the headman, another old fellow, and two women -- all in traditional costume and accompanied by a small orchestra of women playing tuned gongs -- suggests that culture and commerce now co-exist uneasily.

I am more comfortable when Tuairumah simply sits and we drink rice wine afterwards, none of us saying much.

By saying less I learn more: the mats covered in cultural takeaways -- masks, carvings and the like -- which are neatly displayed on yellowed newspapers on the longhouse floor for tourist consumption aren’t made by these people. They come from Indonesian artisans across the border who work cheaper. It seems I am witness to a microcosm of globalisation. 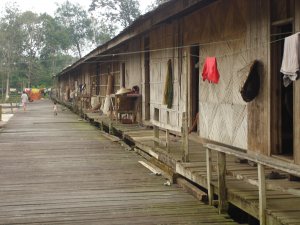 And the Iban today, somewhat surprisingly given their seemingly remote location, have cellphone coverage -- although admittedly limited. In Tuairumah’s living room the large lounge suite is still wrapped in plastic and he owns an impressively sized television.
Other aerials jut out of the roof at strange angles.

Late at night when we are making for bed Unting shakes my hand hard and, unprompted, tells me again they like visitors.

In accordance with tribal tradition, guests are encouraged to bring gifts for the longhouse and on the way here I have been guided by Richard as to what is appropriate.

We pulled in at a small marketplace-cum-lunchstop for buses and he bought a large plastic bag contain 40 packets of instant noodles, and bags of lollies for the children.

I wondered aloud about the appropriateness of these but he is insistent and says the children will be delighted.

I said I didn’t doubt it, and he is confused by my discomfort at these “gifts” and what I see will be the inevitable consequences of lollies and instant noodles -- which I later suspect were traded back to the shop where tourists such as myself buy them. If so, then this is perhaps a trading convenience and social gesture in which everyone wins, and the kids seem delighted, as I expected, to see the lolly bag I carry.

The children seem like kids anywhere: the boys and I flounder in the river using balloons and an inner tube as cheap flotation devices, others take hours of pleasure with handmade kites and run the length of the veranda hauling them into the ash-filed air. 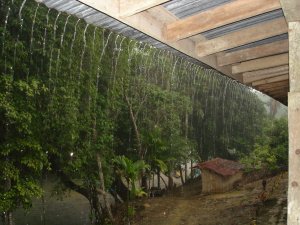 It is still officially the dry season but a deafening seven hour downpour which drops into the impenetrable black of night at 3am gives the lie to that.

It is unimaginable what it might be like here in the jungle during monsoon season when torrential rain will fall for days, if not weeks, and the Lemanak will rise three or four metres.

Even on this saturating morning which washes the blue-brown sky clean but leaves the air rank with the smell of rotting vegetation, the river climbs measurably up its banks and the incessant warm rain turns rivulets into torrents.

My “nature walk” which Richard has threatened is mercifully cancelled. Everyone stays indoors except for an old man who shows me how to use a blowpipe.

Later I sit in a doorway watching the fighting cocks huddle in the corner of their pens as a longboat of tourists wrapped up against the downpour bounces past, slapping against the roiling, muddying water of the Lemanak. 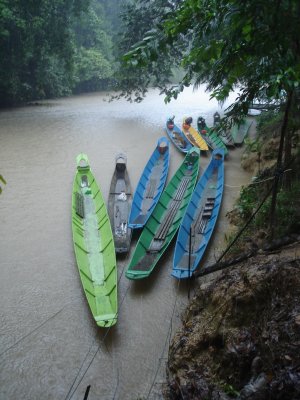 When Richard and I prepare to leave for Sebeliau in a couple of longboats helmed by semi-naked men from the village, we strip down to our underwear and put our clothes and shoes and plastic bags.

It is just 30 minutes away from the muddy clearing below Sebeliau where we got into the longboat to come up-river and meet these people in what was once a remote corner of Sarawak on the border of Indonesian Borneo.

As we watch the river rise I can’t help think: The horror! The horror!

OK You are definitely intrepid!
A friend of mine reported a similar trip, a little uneasy, but glad she showed her kids an alternative way of life.