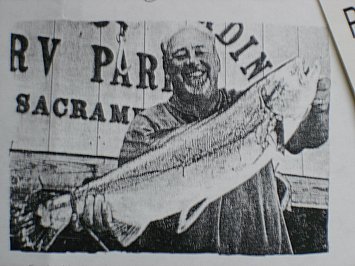 The fact was, when you walked from the cool, fresh air of the Sacramento River into the restaurant at the RV park you could barely breath for the smell of cooking oil.

It coated the tongue and hurt the eyes, and penetrated your clothes instantly. You immediately felt like you had spent a day working over a vat of simmering oil.

Emily didn't seem to notice. I guess she was just used to it.

The Grimes Boat Landing near the small town of the same name was just over the levee from Highway 45, a more interesting back road route up central California than the nearby Highway 99 or Interstate 5. Towns here have names like Sycamore, Colusa and Codora.

The sign to the Grimes Boat Landing and RV Park would be easy to miss as it whizzed past the car window, but we had been in no hurry and spotted it easily. I pulled off the road, up and over the levee which holds the Sacramento floodwaters back from the plains of walnut farms, and parked in the dusty lot near the boat landing.

The RV park nearby was full of trailers but there were few people wandering around in the noonday sun, just some fishermen hoisting their boats into the river and readying themselves for sturgeon, striper, salmon, shad and steelheads. Anything beginning with an S it seemed.

Fish here were of legendary size and Emily's restaurant had the photo albums to prove it: salmon that weighed in at 40 and 50 pounds; a fish as tall as the small boy who hauled it in; two grown men struggling to hold up a creature the size of a plank but was a sturgeon.

No wonder so many people come here to fish, I said to Emily as she prepared a hot beef sandwich.

Oh yeah, she said handing me the pricelist for the weekly and monthly rates at the RV park.

She told me to be sure and check out Colusa where there was the smallest church in the world. I didn't like to say I'd heard that before, about a place in Georgia.

I asked for a coffee.

She disappeared out the back to look for some and I wandered around the large and rustic cabin that served as the restaurant and meeting place. There were fishing photos and trophies everywhere, bits of mechanical machinery rescued from tips and scrubbed up to look like antiques, and a counter above the bait fridge with reels and fishing accessories for sale. The tables were crude but the atmosphere, oil aside, was welcoming and you could imagine nights where the talk would turn to the big ones which got away.

She returned to announce there was only instant.

Fine, I said and wandered back out of the oily room to watch some guys lower their boat into the brown water.

Emily came out with the sandwich. It was terrific, thick and moist, a meal for a man who might want something substantial before a day on the water wrestling with massive fish.

She went back into her oily kitchen even though there were no other customers.

An old man walked up from the trailer park.

How are you today? I asked.

I'm keeping on, he laughed. I've been saying that since I turned 97.

And how old are you now?

He laughed again and shuffled off into Emily's restaurant at the Grimes Boat Landing and RV Park where the solid air would surely have killed a lesser man.