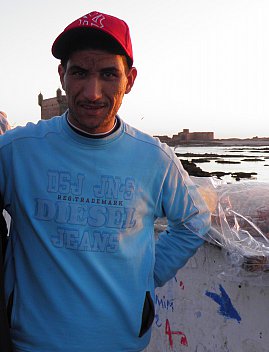 The words most travelers hear in certain countries, and understandably shy away from, come from street people or those with something to sell who ask, “Where you from?”

But in Morocco you need to be wary of waving people away, even street vendors carrying stuff you have spent all your life avoiding, because many locals seem genuinely curious and want a conversation.

So it was with Muhammed who delivered his cheerful cliché without even a suggestion of eye contact. He'd given up on a sale even before the words came out.

But, after I had expressed equal indifference, he put down the tray of spicy cakes on the sea wall at Essaouira on the coast where we were standing and started with that old familiar topic, the weather.

In fairness, Essaouira has a reputation for being extremely windy but the past few days had been unseasonably still. So in fluid English, only pausing sometimes to ask if that was the correct word, he chatted away and eventually we got around to the real subject for me. Him. 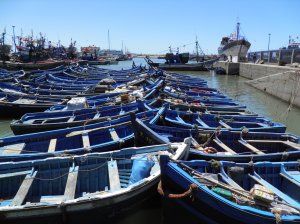 Muhammed said he was “26 years and six months” (I would have put him at least a decade older so that might have been a mistake) and he told me he spoke classical Arabic which he'd learned in school, street Arabic and French.

Without self-aggrandising he also mentioned he spoke Spanish and Italian (“but sometime I maybe use a Spanish word when I am talking to Italian peoples”), both of which he'd learned on the street.

He also said he had a little Portuguese, but less Japanese. I was surprised he spoke any Japanese as there weren't many in Morocco. But he knew otherwise.

“You know Airwave, the shoes?” he said, leaning on the wall as the sun sank. “Japanese don't make those but no one can buy them because they cost too much. So they are clever, they make the number two and three shoes which are cheap and everyone buy them. They have shops.”

We nodded sagely at this lesson in practical economics and I concluded Muhammed was a pretty uncommitted cake seller, something I assumed he only did in the evenings. 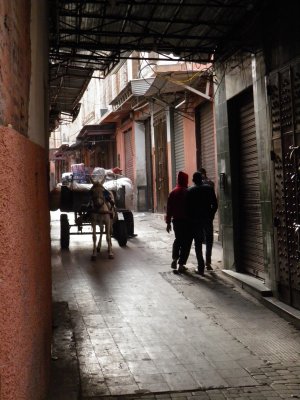 Later that night we saw each other again and he waved furiously from across the square, and the following day on the beach he ambled up – with what looked to be the same cakes – and struck up another conversation. Again, selling cakes took a distant second to having a talk.

Muhammed had said his mother was from Essaouira – a walled city where artists have come for decades because of the rare light and spectacular sunset across the ocean – but his father was a Berber from the mountains. Yes, he spoke Berber too. For a couple of months in winter he would go to the mountains (“maybe 35 degrees, maybe 42”) to work in his father's shop.

As we stood by the sea wall – a thick smell of fish in the salty air from the nearby port, seabirds whirling around looking for scraps and people taking photos of the sunset -- Muhammed had his back to the yellowing sky and deep blue sea. He didn't seem much interested in the view or the cakes, just the conversation.

Later my wife came by and, of course, we bought cakes. Muhammed said some were spicy, some not so much.

After we shook hands furiously he ambled off towards a group of Germans, his cake tray in hand but his heart clearly somewhere else. As I watched he tried English, then hit their language with his “Where you from?” but they waved him away.

Muhammed also didn't do what some cake sellers do if you decline cakes, quickly open their hand to show a ball of hashish and whisper, “You want this?”

As I watched him I thought what a rare, serious, observant, friendly and multi-lingual man he was.

A little dishonest though, he didn't say his cakes were dry and tasteless, spicy or not.

All up they cost about $1.50. But just as you can't put a price on sunset over the ramparts of old Essaouira, nor can you on a conversation with a street seller in Morocco who actually knew where “New Zealand” was.

Very cool, that's pretty much the way I travel 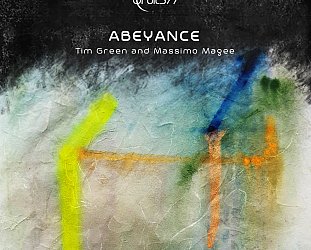