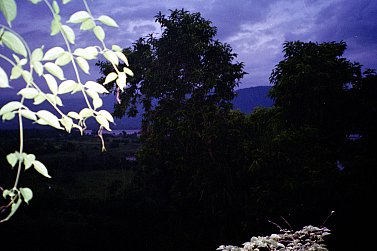 What is that wise old saying: be careful what you wish for, you might just get it?

Raymond got a wish come true, but I suspect it was mine.

I met him at the luxurious Anantara Resort and Spa in Thailand's Golden Triangle where my room with a private terrace overlooking the steamy jungle cost around $1200 a night.

After I had relaxed in the pool-sized bath with its rose petals and aromatic oils I headed for the Elephant Bar, a cool and airy room brushed by ceiling fans and with views across the pool and jungle canopy. From here you could flick a peanut into Myanmar.

Raymond, who was resident manager at this sliver of tropical paradise, introduced himself and we settled down over something white and imported from France which he wanted to sample. Such was his arduous job.

Raymond was in his early 30s at a guess, handsome and healthy as so many Swiss are, and had scored this dream position at a hotel which attracted wealthy internationals who wanted nothing more than to relax, maybe ride an elephant or go for a jungle trek, and come back to the Elephant Bar and pool in the late afternoon. Raymond made sure everything ran smoothly and that the imported wines were up to scratch.

That night he insisted I be his guest at the resort's Italian restaurant -- yes, beautiful chianti and veal available in the Golden Triangle.

The following morning we breakfasted together on the patio, supping superb coffee and choosing between exotic tropical fruits, the full English breakfast or various Asian offerings. Then Raymond drove me down to the elephant park and we climbed into the hills so I could choose an animal to ride. In the afternoon I recovered in my room while Raymond went about his business.

That evening we met again in the Elephant Bar and again Raymond wanted to try some new wines which an importer was offering him, so we sat and talked.

It came up that I had interviewed numerous rock musicians and Raymond was enthusiastic. He was huge fan of heavy metal, had a massive stereo system in his on-site apartment, and wanted to know what musicians I had met.

The expensive wine kept coming as we laughed about Motorhead and Swiss bands like Krokus, and I promised that when I got home I would send him the DVD of the Metallica documentary I had just seen at the movies.

Then I remembered that the Scorpions from Germany were playing in Bangkok that weekend and Raymond went slightly melancholy.

I know, my girlfriend is looking after them, he said. I really wanted to see them, I like them so much but, you know &

He gestured around the teak and panelled Elephant Bar where a trio of Thai musicians were quietly playing local folk and popular covers on traditional instruments.

Raymond's Thai girlfriend lived in Bangkok and they saw each other maybe once a month, he going there or she coming up here. She had something to do with the music industry because she met many touring artists.

The next day I shook his hand after breakfast, we exchanged cards and a fortnight later I sent an e-mail saying the Metallica DVD wasn't available yet but when it was it would be winging its way to him at beautiful Anantara. And thanks again for the hospitality.

The reply came from another address. He had quit his job and was now back in Bangkok looking for work.

Raymond was no longer a prisoner in paradise.