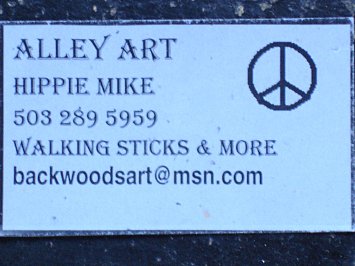 He introduced himself at breakfast as Hippie Mike -- his business card had a nuclear disarmament sign on it -- and told a story.

"One time I walked into this bar with my walking stick, wearing my big hat, and moccasins and the whole place went silent. You could hear a pin drop, man."

Mike stood two metres tall, had long thick greying hair down to the middle of his chest, and a full curling moustache and straggly goatee. Around his neck he wore rows of beads and a leather pouch, presumably containing mojo material or magic stones. He looked like he'd just come down from the mountains to trade his pelts.

By the end of breakfast in this seaside hotel in central Oregon I'd learned that he'd been in the military -- "Didn't go to Korea though" -- and that he had lived in a dozen regions of California, mostly around Los Angeles, and was now based in Portland. He was 60 at a guess and was an artist.

He said he'd become a chainsaw carver a few years back and moved on from there. His hands were slightly misshapen but powerful and his huge chest was full of wheeze which I took to be the early stages of emphysema. When he came back from his room up one flight, where he'd gone to get his sketchbook and a couple of walking sticks he'd carved, he could barely get his breath.

These days he was also teaching painting to a class of young ladies, and having seen his carved sticks -- kitschy affairs, one with an Indian chief on top, the other an owl with buttons for eyes -- I held no hope for what the sketchbook contained.

But there on the first page was a simple, monochrome pencil drawing of the grass, dunes and northwest Pacific outside the window. It was rich in detail and looked full of dancing colour.

"I watched the ocean all day," he said, "just trying to capture the movement so I can tell my young ladies how to paint it."

By the time we'd had our second coffee he'd told me of places he'd been -- Germany, Honduras -- and enthusiastically said how rock band album covers of the 60s had influenced his work.

Frankly, I couldn't see it -- and his Indian chief carving in driftwood was awful. He was off down the river later to collect even more driftwood to make even more art.

Hippie Mike was living in a state where chainsaw art and bits of driftwood painted like snakes and dragons cluttered up the roadside stores, all of it dreadful.

Yet when we shook hands, his oaken grasp enveloping mine, his was unusually soft. Not the hand of a man who wielded a chainsaw or worked with planes and sandpaper, but the touch of a man who possessed that rarest of skills. He could capture the invisible wind and the relentless movement of the ocean on a piece of paper.