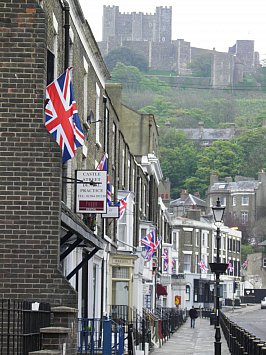 For generations of tourists and travelers, Dover – half of the year within sight of France just 35 kilometers away across the Channel – was the town that never was. Hardly more than a name on the map where boats came in or departed from, Dover was a place glimpsed in the memory's rearview mirror or seen across a blanket of water and spray as clusters of buildings huddled beneath the embrace of the famous chalk cliffs.

And for most, there weren't bluebirds over those white cliffs of Dover, just billows of Turner-like clouds.

Dover was, probably still is, a name more than a place for many people. And the opening of the channel tunnel in 1994 means it doesn't even exist for the generations which get to St Pancras Station and leave for Paris. Or drive towards Dover, only to disappear beneath it and fetch up in France.

Yet Dover, as you might expect given its geographical location, is a fascinating place to visit, even if only to observe the transience of travelers, and it will surprise those brought up on the 21st century version of James Bond and its widescreen thump and exotic locations.

The Dover region features in two Bond novels (Moonraker and Goldfinger) and Fleming placed his licensed to kill man in more mundane settings than we are used to these days. No swanky casinos or gadding about in Venice or Montenegro back in the mid 50s.

In Moonraker Bond ate at Dover's Cafe Royale, “a modest little restaurant with a modest kitchen, but capable as he knew of old of turning out excellent egg and fish dishes . . . he asked for a plate of scrambled eggs and bacon and plenty of coffee”. At the Granville later it is “delicious fried soles and Welsh Rarebit”.

Wordsworth frequently passed through and wrote a couple of poems specifically about Dover (“From the Pier's head, musing, and with increase of wonder, I have watched this sea-side Town, under the white cliff's battlemented crown . . .”) and before she became famous George Eliot lived here. She thought the town “lovely under a blue sky” but didn't rate the locals who cheated her of sixpences.

While looking for his aunt Betsy Trotwood, David Copperfield came here, rested on a step and ate bread he had just bought. True, it says so on the plaque at Dickens Corner. 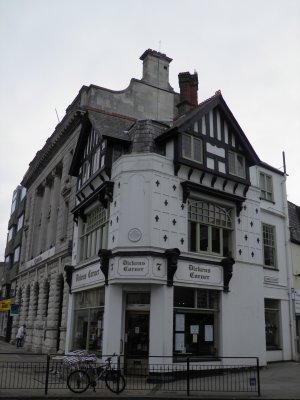 Dickens mentions the town – where he often stayed – in a number of his books and worked on Great Expectations and Bleak House here. Noel Coward took a house above the town in 1945 (he leased it to his friend Ian Fleming who used it as a weekend retreat) and spent many happy days here . . . although two and a half centuries earlier Daniel Defoe was unimpressed.

In his book Tour Through the Whole Island of Great Britain in 1727 he wrote, “Neither Dover nor its castle has anything of note to be said of them, but what is in common with their neighbours; the castle is old, useless decay'd, and serves for little . . .”

But that seems a harsh judgment, the 12th century castle which looks down on the town and the channel offers a testament to the region's political significance. In the walled 76 acres of the castle grounds is the remains of an octagonal 2ndt century Roman lighthouse. Even back then, this was an important shipping channel, and in the museum there is a boat discovered in nearby Townwall St in 1992 which dates back to the bronze age, around 1550BC.

The castle itself is a formidable place: William the Conqueror started it and it was finished by Henry II. The Great Tower is a cube exactly 100 feet in each direction. Today groups of players enact historical scenes in the grand halls and rooms, and period furniture and décor allows visitors to get a feel for what it must have been like in these cavernous rooms where men clanked in armour and guards kept a wary eye on the neighbours across the water.

But there is also a modern history which is pulling tourists: after a $5 million refit, the old chambers and tunnel beneath the castle – some dating back to the Napoleonic era – were opened in 2011. Down here was a nuclear bunker for the regional government but more significantly, this was where the evacuation from Dunkirk, Operation Dynamo, was masterminded in 1944.

Today there is fascinating tour (“Welcome to 1939,” says my guide Bryan) with audio-visual effects and the voices of Neville Chamberlain announcing Britain was at war with Germany, the King's hesitant speech (met with “roar after roar of cheering” by the crowd outside 10 Downing Street) and Sir Winston Churchill.

It is a fascinating tour – groups of 30 taken every 15 minutes – and not the least are the old newspapers like the Daily Mirror with its front page given over to a wanted poster for Hitler: “Wanted for murder, wanted for kidnapping, wanted for theft and for arson”.

The city has been in decline since it ceased to be relevant – unemployment is up although ironically tourism at the castle has been steady with many French students coming to explore their shared history with Britain. And Germans to who line up for the tour of the tunnels because there are few such commemorative sites in their homeland.

Dover, a frontline in war and a gateway in peace, will perhaps always be the town that travelers pass by.

But really, if its scrambled eggs and bacon were good enough for James Bond, then surely . . . 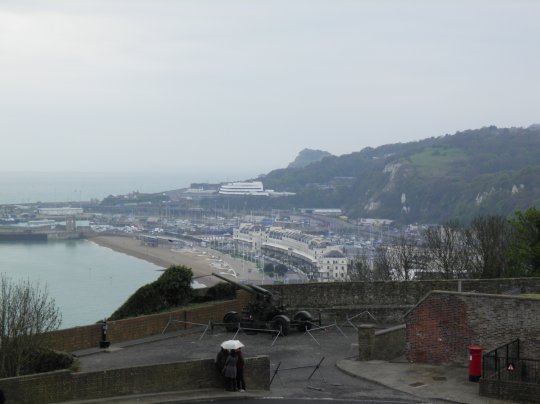