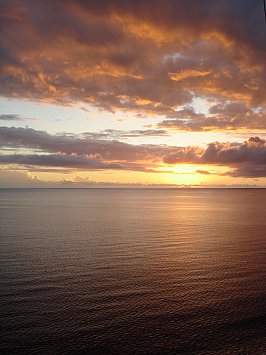 The night was noisy, the drinks were free and free-flowing, and this small corner of balmy Thailand seemed like it had been sent down from heaven -- with an endless buffet of European, Chinese, Thai and Japanese dinners.

The party at Hua Hin had started just before sunset, the dancers and fashion show came on shortly afterwards, and beneath palms which waved in the evening breeze like a cliche, we were partying. Tomorrow we would all be going our own ways again.

I turned to find a stranger had joined our table and he introduced himself as Daniel. He was English, tall and tanned, and down from Bangkok for the party and cocktails.

We shouted our introductions over the noise of the band playing Eagles' covers and hoots of laughter from tables nearby. He asked what I did and I mentioned I was a journalist who had written a lot about music. He was delighted and said, "Me too".

I asked who he wrote for and over the sound of Take It Easy he named the heavy metal magazine Kerrang! He didn' look like a metalhead -- well groomed, short cropped hair, no visible tattoos -- but I have long since learned not to judge people by their appearance. And I was pleased to talk with someone who might know something about the Thai hard rock bands I had heard.

He listened attentively and we knocked back more Singha beer. I got on to other heavy metal bands I had heard and joked that Swiss and German groups which couldn't get a career back home often seemed to play in Bangkok. He agreed and so I rambled on into other metal bands I was acquainted with like Saxon and those in what was called "the new wave of British heavy metal" in the late 80s-early 90s.

As the night and our tongues thickened we ended up chatting about other things -- how beautiful and largely unsullied this part of central Thailand on the east coast was, deadlines and other journalistic natter -- but somehow the subject of music came up again.

I said that I had interviewed many musicians, including drummer Lars Ulrich from Metallica. He seemed uninterested in this and I realised as a writer for Kerrang!, the world's premier hard rock magazine, he had probably met many such musicians.

"I guess you actually know a lot of these people personally," I said.

"No," he replied, looking at me as if I had been beamed down from some other planet. And so our conversation trickled to a close. We exchanged cards and each of us tottered off to our rooms.

The following morning I was packing my bag and I found Daniel's card. My embarrassment almost made me faint. He didn't work for Kerrang! but a glossy and up-market tourism magazine named after the local word for non-Thai: Farang.