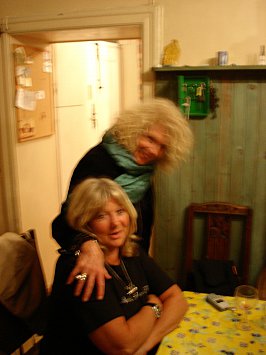 My friend Amanda's reputation -- some might say cheerful notoriety -- is well known around Uzes, a charming medieval town in Provence about 40 minutes north of Avignon.

Amanda's village of St Maximin -- 10 minutes outside Uzes and where the writer Jean Racine used to stay -- has visitors and residents from all over the world, and many of them have been guests at Amanda's huge 18th century stone maison which commands a view of the rolling valley below.

Because she once owned La Poste restaurant on Auckland's North Shore and was well known here in restaurant circles (and beyond) she regularly hosts Kiwis who come to get lazy or curious in Provence, drink wine around her pool at sunset, and eat the beautiful food that Amanda can whip up as if by magic.

Amanda loves life more than anyone I know. Her website is www.joiedevivre-unlimited.com -- and she wonders why she doesn't get interest from Americans? -- which perhaps explains why she is so well known in the region where the Roman aqueduct at Pont du Gard, the former home of the Popes in Avignon (and that other famous bridge) and quaint but busy Usez are all within an easy drive for her visitors.

But all that busy tourist stuff seeps away when you are seated at the Terroir Cafe in Place des Herbs in Uzes, shaded from the summer sun by the broad leaves of the plane trees, and where watching the lazy fountain and reaching for a glass of wine count as activity. It was here with some ancient locals and a lunch of carpaccio and sun-dried tomatoes I had the first hints of Amanda's reputation.

I was chatting with the owner who spoke English like an American, French like a local and came from Switzerland.

He asked how long I had been in Uzes and I told him, then he asked where I was staying. I said St Maximin.

"You are at Amanda's then?"

A few hours later my wife was in an antique shop admiring wonderful things, of which there were many, and she got talking to the owner. It turned out he had done the decor in the restaurant Amanda had introduced us to the previous night. Of course he knew Amanda. As did the owners of that restaurant -- who had asked her advice on the menu and decor -- and as did a man I asked for directions when he enquired where I was from.

They all knew Amanda for her generosity to her friends, her rich laugh, her wild blond hair, and her love of life. Anyone who has "joie de vivre" in their e-mail address has a lot to live up to.

I suspect around Uzes she has never disappointed.