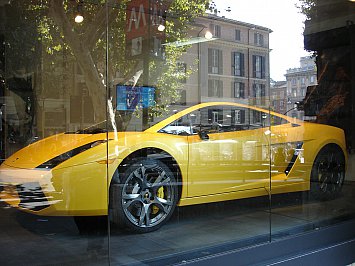 It's all in the odd juxtaposition really. Just off the Piazza Barberini in Rome with its magnificent Fountain of Triton by Bernini -- and only a short walk from the more famous Trevi Fountain -- is the Autocentri Balduini on Via Vittorio Veneto.

In the window glistening Lamborghinis are displayed like shop mannequins in a clothing store.

It is as if you could just happen on it when coming up out of the nearby Metro, spot something yellow and low-slung that took your fancy, and pop in and buy it on the credit card before going across the road for a panini.

Autocentri Balduini exudes speed and life and exoticism -- and right next door in yet another odd juxtaposition is a memento mori, a reminder that we are here for a very short time.

It is the Chiesa di Santa Maria della Concezione and a part of it is the crypt for the remains of Capuchin monks. It is one of the most unusual places in this city where the odd is often the norm.

In five small chapels the skeletal remains of the monks who died between 1528 and 1870 have been arranged to form funerary art like no other. Skulls and thigh bones are arranged to form altarpieces, vertebrae and ribs line up to create floral decorations, and in one a winged hourglass is made from shoulder blades. There is a crypt of pelvises and another of skulls. In a passageway is a winged skull in a circular frame of vertebrae which appears to have wings: they too are shoulder blades.

The Capuchin Chapel -- entry by donation, no photographs, respectful silence please -- was established around 1631 when the monks moved from near the Trevi Fountain to this new site, bringing with the bones of their brethren. It is believed that it was some time in the late 1700s -- when Capuchin friars fled persecution in France -- that they started to arrange the skeletal remains into the weirdly beautiful designs we see today.

The peculiar thing is that after a few minutes the pilgrims and tourists who make their way here suspend whatever ghoulishness they may have brought with them and are in silent awe of the floral designs made from vertebrae, a hanging lantern of sacral bones, and ribs arranged to make radiating patterns around a clock face formed from finger bones.

There is a theme: that life is brief -- the clock, the hourglass -- and above the exit the inscription roughly translates to, "What I am now you will become".

It is a strangely compelling place which inspires a contemplation of mortality, and maybe even inspires you to live to the full the brief time we have.

Might make you want to go out and buy a yellow, low-slung Lamborghini, in fact. 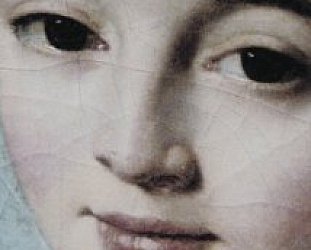