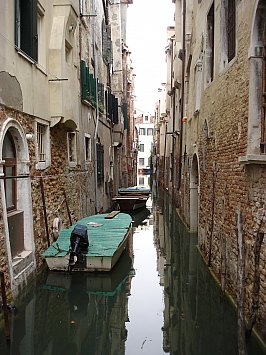 The night train from Paris to Venice was about to leave when I heard the noise in the corridor outside my sleeper: loud American voices and the banging of baggage against the carriage walls.

A woman carrying a small child and a large suitcase, and an older woman who was obviously her mother, appeared at my door. The older woman was also laden with luggage. They hauled their heavy cases inside and only then spotted me sitting in the corner.

This was a six-bed sleeper and they assumed they would have it to themselves. I explained that I too had a ticket for this compartment. They looked aggrieved but came in anyway and tried to heft their cases onto the rack above. I offered to help but they declined.

They struggled, succeeded and then slumped onto the bunk opposite.

The husband appeared at the door. He was a big man dragging two huge suitcases, each the size of a tea-chest. He also had one of those baby strollers the size of VW which, when folded down as it now was, looked like a small motorcycle. He also had a baby's car seat. He manfully dragged all these objects into the tiny compartment while his wife explained my presence.

He was annoyed. He'd paid for privacy he thought, but I waved my ticket and told him this was how things worked on European trains. But they would not be defeated but such customs.

While his wife and mother-in-law with baby in tow went off to find a French porter and ask for new accommodation the big weary man slumped down and we talked.

They came from Pennsylvania and had left from New York a few days previous. They had spent two days in Paris and he hadn't enjoyed it. Their character-filled hotel hadn't had a decent lift and they had been on the third floor.

He'd had to haul most of their luggage up the stairs because it wouldn't fit in the tiny lift and he would be having a word to his travel agent at home who had recommended the place.

It had been awkward getting around by Metro so they'd had to use taxis everywhere and they were expensive, the Louvre had been too big and too crowded, the food wasn't as good as they had expected -- and last night a guy had held him up with a knife and demanded money.

Now they were going to Venice and would hire a car and drive around. That explains the baby's car seat, I said.

Yeah, he'd been told they didn't have them in Europe.

Then I mentioned they couldn't drive in Venice, it was a city of canals.

Yeah, but he'd seen photos and they also had streets.

I agreed, but asked if hed seen any cars on them.

Things were unravelling and I felt sorry for him. The holiday had been his wife's idea.

She returned and some conversation ensued. The porter had said he would see what he could do. The big man said he'd go talk to him as well. I said I'd watch their bags but they declined and hauled the whole sorry caravan of cases, car seat, pram and handbags into the corridor and away.

The following morning in Venice I saw them on the platform of Santa Lucia station, their mountain of bags before them. I went up and said I was pleased things had worked out for them and hoped they would enjoy their time in Venice before going back to Paris.

He grimaced. It had been his first time out of the States he said, and he doubted he'd do it again. I got the impression his wife and mother-in-law had done the packing.

Oh, did I mention how long they were going to be away from home? 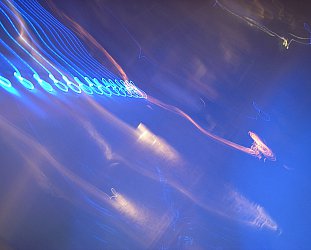 To be honest, to this day I couldn't tell you what it was all about, but I spent the best part of an afternoon trying to figure it out. It was in Amsterdam and I had done all the right art... > Read more