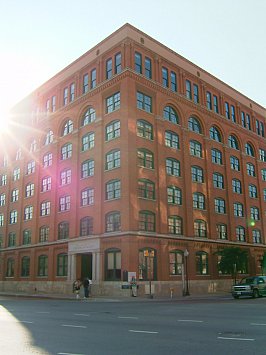 A simple wrong turn and the pressure of traffic forced us to carry on down the road, looking for an exit. But then, through a set of traffic lights, we were there.

I drove on as slowly as the urgent traffic would allow but we looked around at the slow dip and curve of the road, so recognisable from that famous piece of footage we have been seeing for fortysomething years.

So I hooked a left, circled around for a couple of blocks and cautiously made our way back. We pulled over and got out of the car. There it was, the Texas School Book Depository, the famous "grassy knoll", Dealey Plaza . . .

As much by chance as intent I have been to any number of slightly ghoulish places.

I have seen where River Phoenix died outside the Viper Room in LA (they've taken away the plaque now) and stood at Elvis' grave a couple of times. And more recently went to where Pakistani terrorists blew up various places in Mumbai.

Goes without saying I've been at the Town Towers in NYC:  up the top a few years before 9/11, down the bottom on the first anniversary [that was weird!] and since.

I've seen where Jewish and Palestinain and Irish and Vietnamese people have all died as the result of terrorism or by the hand of gtheir own people.

And more benignly: I have been to the modest plaque over Buddy Holly in his hometown of Lubbock, Texas (there are photos of this and the Graceland grave in Images From Elsewhere); stumbled on Jim Morrison's graffiti-covered grave in Pere La Chaise in Paris; and have been to Jimi Hendrix's last resting place outside Seattle twice, the first when it was a simple grave which allowed for quiet contemplation, the second after they moved him and built a hideous memorial.

But there is something unique about the place in Dallas where John F Kennedy was assassinated in November 1963.

It is that it's so familiar from those endless -- and endlessly, sickly fascinating -- replays of the grainy 8mm footage shot by Abraham Zapruder. And that the jury of popular opinion is still out on just who shot Kennedy, and from where.

Frankly, I've been there: I know what I know.

The Texas School Book Depository -- and who knew Texas needed such a huge building in which to store old books? -- is on the corner of Elm and Houston Streets in downtown Dallas. It is a magnet for curious tourists, nutcases, historians, the sceptical and the slightly Kennedy-obsessed, and any number of conspiracy theorists.

For the latter there is more research to be undertaken at the Conspiracy Museum about a two blocks away.

I guess if you think Lyndon Baines Johnson had Kennedy killed so he could become president then you are just as likely to believe that Nazis killed the Lindberg baby.

Around the "grassy knoll" men with blazing eyes sell magazines which trace bullet trajectories and have graphic autopsy photographs of Kennedy's shattered brain.

But if you are in Dallas it is impossible not to feel the attraction of the Sixth Floor Museum in the Texas School Book Depository, because there you can hear about Kennedy's life -- lots of promises but little achieved seems a fair verdict on his short presidency -- and consider the angle of fire that Lee Harvey Oswald would have needed to get off those rapid shots at a moving motorcade below.

What I do know is that if Oswald alone did it, then he was an exceptionally fine marksman.

And that's pretty much what the guy next to me thought too, although the other guy who laughed and said, "Awwa man, no way" seemed to be more certain of his opinion.

It's a place where you have to make up your own mind.

It might not be the most pleasant day out, but in the gift shop below you can buy Sixth Floor Museum t-shirts, postcards and kitschy Kennedy memorabilia.

I've got the museum ballpoint pen next to the plaster bust of Ho Chi Minh that I bought in Hanoi after going to see his mummified corpse.

For other travel stories see here.

In his delightful if lightweight film That Thing You Do, director Tom Hanks puts at the centre of the story a Beatles-inspired pop band in the Sixties. In their search for a name they hit... > Read more