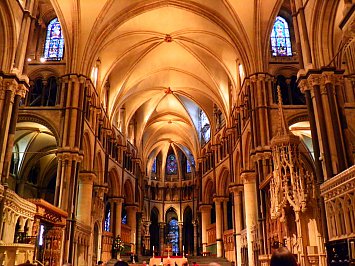 So the murder was good for business then, Mike?
“It was the biggest cash cow the cathedral had known,” laughs Mike Evans, one of the guides at Canterbury Cathedral, the spiritual home of the Anglican Church and where Thomas Becket was murdered in 1170.

Evans, who retired from a sales career in London and returned to his childhood home of Canterbury some years ago, mixes serious and arcane history with useful trivia (“Richard the Lionheart didn't speak English”) and a common touch. He quips about “the holy stitchers” and “holy dusters” (volunteers who repair prayer cushions and dust the statuary) and discusses the death of The Black Prince (Edward, who died in 1376) as if it happened last month.

He notes how nobles from Europe attended Edward's funeral and how, like today, they came to curry favour with the church – big business, if you will – through donations.

“Which explains these,” he says, gesturing towards dozens of replicas of shields and escutcheons in the roof of the cloisters outside the Chapter Room.

The centuries get misty at Canterbury Cathedral but bleed into the present. The Chapter Room – where for centuries monks and the abbot would discuss the doings of the day – is where Britain's Margaret Thatcher and France's Francois Mitterrand signed the agreement for the channel tunnel just down the road.

French and English history collide here through bewildering political machinations when it comes to royal lineages, and don't even think about untangling the whole Catholic/Protestant, divorce/marriage-to-cousins caboodle.

Canterbury Cathedral is a living church and – despite a noisy group of French students posing for phone cameras – many visitors stop for prayers which, on this day, include the plight of refugees and those suffering under the yoke of occupation and war. The church, says Evans, is as alive today as it ever was. Perhaps even more so.

That murder, martyrdom if you will, of the popular Becket (“who was fluent in Latin, French and English,”) pulled in pilgrims immediately – the secular curious haven't stopped coming since – and Evans unwraps it like a mystery of politics and intrigue.

He tells how Becket rose from an ordinary middle class family to positions of power and influence with Henry II, was given the archbishop role at Canterbury, and to Henry's dismay took it seriously. They fell out, Becket fled England for six years before it was safe to return. Then Henry, in France, was outraged again when Becket asked the pope to excommunicate the Archbishop of York because he'd sided with Henry over the matter of legal jurisdiction. Furious, Henry uttered that famous line: “Will no one rid me of this troublesome priest?” Or maybe he didn't, reports vary.

But four loyal barons, hearing his rage, traveled to Canterbury to persuade Becket to change his mind, “but Becket resisted, over there” says Evans pointing to the courtyard.

“Then they followed him in here and a struggle ensued.”

As he speaks, the awful scene in this north west cloister seems to become real at the spot where Becket was hacked down. Today a chilling sculpture of three brutal swords – evoking a cross and a killing simultaneously – stands near where Becket was murdered. Later Evans points out the solitary candle above the spot where his bones once lay until removed and destroyed on the order of King Henry VIII.

For us it has been a day of death and conniving, of towering faith and magnificent architecture, of old murals only discovered recently when a wall in the crypt was removed, and of beautiful stained glass. And, most of all, of events set in motion some 1500 years ago – when St Augustine came from Rome and was given land for a cathedral and abbey – and brought to life by a former salesman turned master storyteller.

Mike Evans shakes hands and walks away, disappearing into the vastness under the towering nave -- with its tourists, worshippers and doubtless a few holy dusters -- leaving a trail of history in his wake.