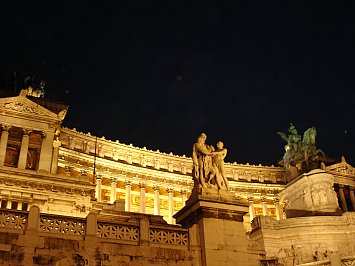 There are few churches in Rome more interesting, or more overlooked, than Santa Maria in Aracoeli, tucked in beside the famous Vittoriano, the massive white monument which dominates Piazza Venezia and looks like an old Olivetti typewriter.

But walk up a very steep flight of old steps and after a wheezing climb you enter one of the more fascinating places in the city.

And tucked away in small altar at the back is a miracle-working statue.

And to get to it you walk through a site seeped in history.

Legend says that at this place, the highest point on the Capitoline Hill which overlooks the old Forum on the other side, one of the Sibyls foretold the coming of Christ.

This was the site of the temple of Juno where another legend says the honking of geese in about 388 BC acted as a warning and saved Roman citizen sheltered there from invading Gauls.

By way of thanks, for generations geese were royally fed and cared for, and every year a goose was dressed in purple and gold then paraded around the city on an elaborate litter.

It was also here in the 14th century where Rienzi, the man whose life inspired Wagner's opera of the same name -- which in turn inspired Hitler into murderous megalomania -- was put to death. His statue, a small and odd affair, stands in the garden nearby, largely ignored.

It was in this church that Edward Gibbon sat in 1764 and conceived what would become his life's work, his massive, multiple volume tome The History of the Decline and Fall of the Roman Empire which he started at age 27 and finished when he was 50.

The odd thing is Gibbon spent little time in Rome, just a brief Grand Tour visit, and his unfortunate illness -- a swelling of the testicles to an enormous size -- meant he didn't go back when he had finished his final volume.

The columns which now support this dim and surprisingly large church where he once sat -- the construction of which probably began in the late sixth century -- were taken from various Roman temples and so few are similar in appearance.

Over the centuries the building hosted Greek monks, Benedictines and Franciscans, and there are 15th frescoes by Pinturicchio in one aisle. Donatello made one of the tombs here, Michelangelo designed another.

There is also the tomb of the farmer who found the statue of the Laocoon, one of the most important discoveries of the Renaissance, a copy of which is in the Auckland War Memorial Museum.

But all these things pale against what is held in a small dark room to the left of the main altar, near the bookshop.

Here, in a space which commands silence, is a statue of the infant Jesus encased in gold and jewels. It is a haunting little figure -- some of the effect doubtless comes from the lighting -- and it is said that the original statue was carved by angels from the wood of an olive tree from the Garden of Gethsemane.

But so many legends surround the Bambino, as it is known, that it is impossible to discern the truth. The more likely story is that the original was carved by a monk in the 17th century.

The original miracle-working statue which was believed to have curative properties would be taken to the bedside of the gravely ill, even into the 20th century.

The Bambino has not been immune to encounters of the unpleasant kind: in the 40s a thief hid himself inside the chapel and stripped it of its jewels. Within a week it was again covered with glittering finery donated by the faithful.

But in 1994 it was stolen and never recovered. Yet the copy -- a doll wrapped in gold and wearing a golden crown -- still receives the love of the faithful.

Around the base are letters and entreaties from all over the world, written by those wanting the protection and cure from illness that the Bambino offers.

When the writer H V Morton visited in the mid 50s and asked what happened to the letters he was told they were burned, unopened.

Their contents, the friar said, were between the writer and the Bambino.