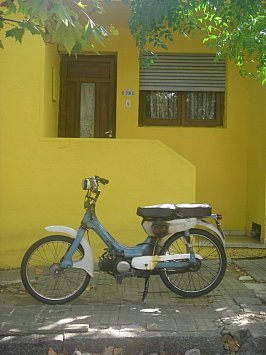 Excluding the journey by boat from Buenos Aires (an hour each way), the time difference with Argentina (another hour) and queuing for tickets then Custom’s clearance (yet another hour), our “day” in Uruguay came down to little more than six hours, some of which involved embarking and disembarking at both ends.

However, I feel confident enough to offer an in-depth report on Uruguay, which, from my research, boasts exceptional cuisine (the spaghetti was nice), excellent wine (the half-litre of house malbec very palatable) and those same annoying pipe-blowing Inca musicians you encounter from Melbourne to Madrid.

In truth, my exploration of Uruguay (population around 3.6 million) was confined to one tiny, tourist-infected corner called Colonia.

Our “day” there started with a mad drive through the streets of Buenos Aires with a taxi driver operating on minimum tolerance towards the 18-wheelers heading to the same port, followed by the loss of a camera, then some incomprehensible delay at Customs that saw us the last passengers racing aboard for our journey across the broad and muddy Rio del Plata.

By the time we got to Colonia del Sacramento, we were just glad to be anywhere.

Colonia was a garrison town for the Spanish from the 18th century and the historic little enclave of maybe two dozen streets is beautifully preserved – the bits that didn’t fall down or get blown apart, that is.

Many tourists in Colonia hire small motorcycles or what look like pumped-up golf buggies, then putter around the cobbled streets in considerable discomfort while convincing themselves they are having a wonderful time.

They – especially the senior Americans who haven’t been close to a motorcycle since they saw Easy Rider five+ decades ago – look terrified and keep their hands poised over the brake in case another tourist should carelessly amble onto the road without looking (a common occurrence) or steer their own vehicle directly at them. They see Colonia in fits and starts.

The locals are very tolerant people … and cautious drivers.

The good citizens appear to have imported the idea of broken footpaths from Buenos Aires but have passed on the dog-droppings option, and the Cola Wars are fiercely fought in old Colonia: Pepsi wins by default because it has adopted a kind of archaic calligraphy in keeping with the chintziness of the town. 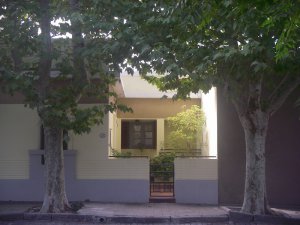 Oddly enough, aside from being a town prettified for our benefit, there is something to see in Colonia – and it’s not the historic fortress or old gateway.

What Colonia has going for it – especially if you are a photographer who hasn’t lost a camera – is interesting architecture. The first that strikes you is the port-side Armada Nacional building (home to the architecture firm of Pablo Lambrechts-Bertinat), which is elegantly post-Bauhaus – all angles, block and glass – and partially surrounded by its own small moat.

It is next to what was probably a late 19th-century warehouse but now seems to be a concert hall.

This is the first hint that Colonia, a World Heritage site, is more than just an escape from noisy Buenos Aires across a river of oceanic dimensions.

Colonia is also crammed with old, one-storey buildings that are brightly painted and draped in jasmine or hibiscus plants, with the occasional old rusting car photogenically deposited for effect on the narrow street outside. The pots of flowers in the front seat or open boot are what advertising people call “added value”. 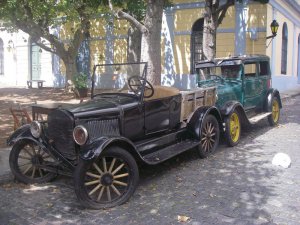 It’s pretty, and I’m sure some people couldn’t hate it more because of its farcical effort to seduce. But – and I know this because I carry two cameras – Colonia takes a nice photo.

Of more interest than the distressed cars, the historic lighthouse and the cheap wine (they take US dollars, Argentinian pesos and their own currency, which was a confusing multiple of the peso from across the water) is the way the flat light hits the white and vibrantly coloured walls of the houses. Hard surfaces, interesting shadows and textures.

Photographers on foot have a field-day. The people on motorbikes or golf buggies seemed to miss it all.

So I enjoyed – on foot, naturally – the first three of my six hours in picturesque Colonia. After that, I got bored senseless.

And there is my in-depth report on Uruguay, a country I came to know intimately in the short time I was there. I’m sure the capital, Montevideo, is exactly like tidy little Colonia and that the Uruguayan people are all as friendly as the local woman I spoke to.

Of course, she was a waitress, so maybe it was in her contract to be pleasant.

Well very good Graham, but what about the weed? Being the first country in South America to legalise marijuana, did they make a good job of it, and what is the local product like? Enquiring minds demand an answer... 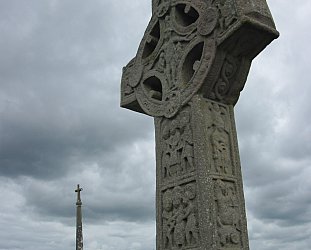