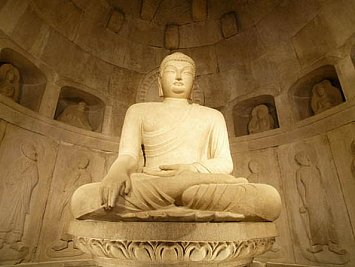 The middle-aged man was upset I had woken him at the unacceptably early hour of noon. But I guess that's the kind of inconvenience he has to expect if he runs a yogwan, one of the cheap travellers inns in South Korea which are easily identifiable by the sign which is like a U with three wiggly lines coming out the top.

I had seen his sign---which represents a bath---as I wandered the streets of Kyongju, a city of around 300,000 near the east coast.

The man grumbled and blinked into the light, then led me past his hammock slung across the small kitchen and down to a tidy room at the back.

By the time I had unpacked a few things for a day around this historic city he was in a better mood and so we shared tea on the steps outside and he told me how to get to the famous 8th century Buddha at Sokkuram Grotto in the mountains which had only been discovered in the early 20th century.

Kyongju -- and the nearby Pulguksa temple below the grotto -- are in the most pretty and historic part of the country. Kyongju was the capital during the Shilla dynasty until about 1000 years ago and dates back to the century before Christ.

It had been a single photograph seen in a book back home that had made me want to come to this region I knew nothing about: it was of an incomparable painting of a Buddha on a wall at Pulguksa.

At the bus station in Kyongju a young student had pointed out for me the way to Tumuli Park where the Shilla tombs were---silent mounds in manicured gardens with trim walkways snaking between them---and also where I might find a yogwan which was my first priority.

The man at the yogwan, now fortified by his tea, suddenly became very animated and was keen to show me to his brother's shop which sold the best arts and crafts in town apparently, and also to guide me to a fine restaurant which I took to be owned by another family member.

I would get a good bargain in each he said, and wrote something on a card for me to show.

I assured him that after seeing Tumuli Park I would go shopping and eating, and I headed off. He waved me a furious farewell until I rounded the distant corner.

Tumuli Park is a massive walled area containing about two dozen tombs, one of them internally opened in cross-section to reveal display cases of ancient armour and weapons, jewels and pottery, and other material belonging to the 5th century king who is buried here.

The park is restful, but it was the Buddha in the hills that had brought me here. So, after wandering back through town and a meal in the recommended restaurant (if discount applied I hardly noticed it), I went to my yogwan for a long bath and an early night.

The following morning I tip-toed past my sleeping host, caught the bus to Pulguksa and spent a cool autumn morning under bright paper lanterns strung between the multi-coloured temple complex which staggers its way up the hillside on a series of stone terraces cut into the surrounding forest.

Pulguksa, one of the great sights of the world and mostly untrammelled by tourism in any season other than summer, is a place to sit and have your breath taken away by the sheer beauty of the architecture and the Buddhist art: dizzyingly colourful images of the Buddha and various bodhisattvas line the walls; roof beams and arches shimmer with yellows and vivid blues; in the gardens stand huge statues or small piles of stones built by the faithful . . .

I find the Buddha from the photograph which has drawn me here. Words fail.

Carpentry is art here and buildings are constructed without nails. Massive beams interlock in a dozen places and they support rooms the size of small palaces.

Most of my day is spent in wonder, and then I take the bus up the mountain to Sokkuram Grotto to see the enormous seated Buddha who gazes out to the Eastern Sea in the distance.

The air is chill here and in some places a crisp residue of snow lies in the shadows.

The Buddha, now restored after centuries of neglect and behind glass, breathes a mysterious quiet on this cold day. There is no one else here other than a young monk who smiles briefly then goes off to light incense in a nearby temple.

The silence envelops me.

Everything here takes on a different kind of scale: the Buddha is ancient, the traditions older, the mountains even more so. We are so high that the mountain range between here and the distant sea---only vaguely discernable, perhaps that line of light blue?---seems to fold like so much brown paper sprinkled in autumn greens and golden reds.

I spend the day doing nothing but looking, thinking and sitting.

That afternoon I take the bus back down the mountain, connect to Kyongju and make my way back to my yogwan.

I want to assure my helpful host that tomorrow before I leave for Seoul I will buy some carvings from the shop he has recommended.

But it is now dusk and again he is asleep in his hammock.

Sounds amazing Graham! I'd love to see that one day. Happy New Year!