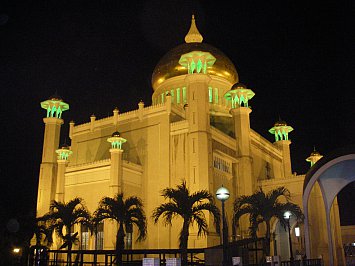 Short of being accosted by a wild-eyed mariner, I can't say I wasn't warned.

“There's a reason why people don't go there,'' barked an e-mail the week before I was due to go: “It's boring!''

There sounded little promising about Bandar Seri Begawan, the capital of Brunei. But I was convinced I knew better. If others said it was dull I would find excitement, something undiscovered and illuminating.

Uncovering the hidden Brunei---in truth only Bandar Seri Begawan, known widely as BSB---was my mission and I would return to announce heroically BSB should be on any traveller's itinerary, which it currently isn't.

I knew no one who had been there -- and others thought, because it is an oil-rich sultanate and rhymes with Dubai, that it was in the Middle East. Even my airline ticket from the travel company had "Dubai'' on the attached Post-It note.

And a pamphlet I picked up on landing noted Brunei "has often been confused with the other oil-rich Gulf state of Bahrain. It is also sometimes confused with Bhutan in the Himalayas or Burundi and Dar es Salaam in Africa!''

Brunei had an identity problem.

But I had chosen to go to the pocket-sized Brunei - more properly Negara Brunei Darussalam: Brunei, the Abode of Peace -- on the north coast of Borneo.

Not that I should have bothered.

As the message said, there's a reason why people don't go there.

According to its own publicity, Brunei is "a kaleidoscope of nature, culture, heritage and contemporary Asia which makes it a compact, safe, healthy and easy-to-explore family destination''. It boasts the best roads in Borneo, and car ownership among the highest in the world.

It should be a fascinating place. It is the capital of the most Islamic country in the region where its sultan has an estimated worth of around $55 billion. He once sued his brother Prince Jefri for embezzling about $15 billion, and he owns between 3,000 and 5,000 cars. Not rejects from Rent-A-Wreck I'm guessing.

Even at first blush, however, it was obvious there was little economic trickle-down in Brunei (population around 400,000) and that not everyone was wealthy, although my taxi driver wore a visibly expensive watch the size of a saucer and carried a cellphone beamed in from a decade in the future.

When he dropped me in an alleyway opposite my unpromising looking "rest house'', the few citizens on the street stopped to stare. It was as if I had stepped into a weird western, a stranger in town. 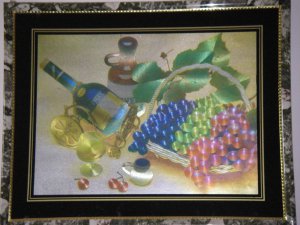 My ridiculously cheap room was the size of squash court and as scrupulously free of decor, aside from the arrow on the ceiling pointing to Mecca, a Qur'an and prayer mat, and -- somewhat cruelly in alcohol-free Brunei -- a framed collage of a Cognac bottle and grapes rendered in some kind of shimmering plastic.

The rest house accommodated migrant workers -- six Indian men occupied the room next door, some Chinese working girls moved discreetly in and out -- but it was comfortable, clean and my room enjoyed an unobstructed view of a stained whitewashed wall, some razor-wire to keep out unwelcome intruders and a mass of rusting pipes. 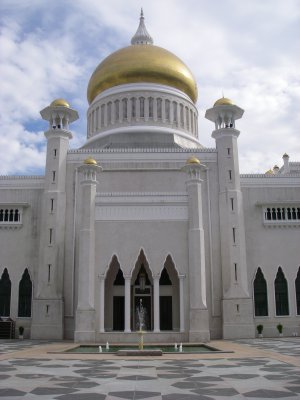 This was not the gleaming, modern and wealthy sultanate I had anticipated. I must have been thinking of Dubai. Or Bahrain.

Undeterred, I planned a foray into BSB and its advertised delights: the village of Kampong Ayer built on stilts over the river; the famous Omar Ali Saifuddien Mosque in a large artificial lagoon; a glimpse of the Sultan's residence (twice the size of Buckingham Palace they say) from a point up the river . . .

As it happened my rest house was four minutes walk from the impressive mosque and even fewer from the river with Kampong Ayer on the not-so-distant shore.

I went around the mosque, picked up a water taxi and was sped across to the village where I walked some rickety wooden pathways between the houses, then was raced up-river to glimpse a tiny corner of a gleaming bulbous thing I took to be part of the roof of the palace.

And that was it.

BSB was a city you could see in two hours and be bored with in three. 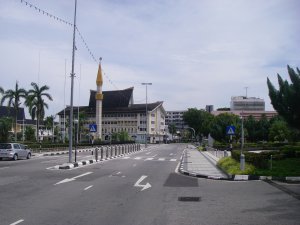 As chance would have it, it was also Ramadan so by late afternoon the streets, hardly busy anyway, were empty. I took a photo of the laughably quiet “rush hour'' (right).

I found myself walking in circles, ambling through clean but largely deserted shopping malls, and finally out of boredom and in the absence of a bar where I could meet people, I went to the movies.

I was the only person in the 500 seat cinema. Either people in Brunei weren't into the B-grade Thai horror film Train of Death (subtitled in three languages) or they had something better to do.

I suspect the latter. They needed to eat at the end of a fasting day and were sensibly at home. Where I wished I was.

After widescreen decapitations, angry zombies and a train racing through bucketloads of blood I wandered back to the mosque which by day had shone like a seriously scrubbed Taj Mahal. 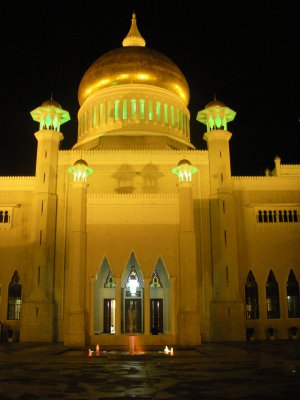 At night it was floodlit and looked golden, its reflection mirrored in the still water of its lagoon.

I watched the faithful gather in this remarkable building which gently exhaled harmony.

Then I ambled around, passed all the same places again, stopped for a coffee in a large cafe where I was the sole customer . . .

I tried to amble some more but ran out of ambling places.

I was in my room by 8pm and went to bed terrified I would go crazy with boredom the following day. 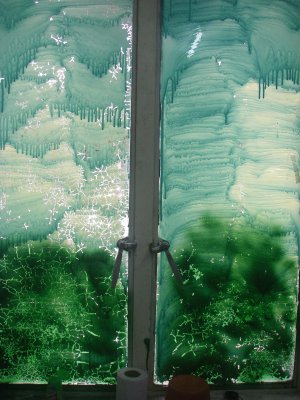 In the morning I found myself taking photographs of the weird patterns of paint on my toilet window.

Later I went by local bus to the Brunei Museum which acclaims the country's oil industry and long history.

More compelling was the gallery of Islamic art from the sultan's private collection: silk prayer mats from 19th century Iran; boxes of ivory and colourful silk sashes; 15th century manuscripts and a model of the Dome of the Rock rendered in pearl; beautifully inlaid daggers; manuscripts made mysteriously exotic by my inability to read the Arabic script . . .

Even a 19th century shoe-shine box took on the resonance of a fine art object.

It almost made my trip to BSB worthwhile---but then I went to the nearby, and equally deserted, Malay Technology Museum which offered replicas of pre-European Malay houses populated by slightly damaged shop mannequins in traditional costume. 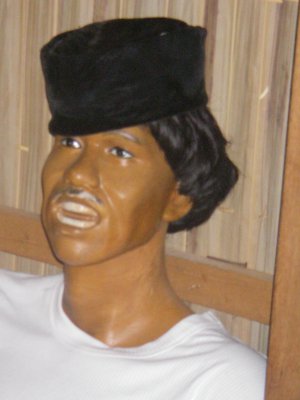 I took the bus back to BSB, walked past the same KFC and Pizza Hut and jewellery shops and went back to the mosque. Because it was there.

I had a shave to fill in time, bought a drink at the open-air market, walked some undistinguished backstreets---and went back around the mosque.

I sat by the river and looked at Kampong Ayer to make sure it was still there.

Sometimes people would ask me where I was from and when I replied brightly, hoping to strike up a conversation, they would nod, their curiosity satisfied, and walk off.

Everything I had heard about BSB was true: there isn't anything to “do'' – if you believe “do'' means entertainment and amusing diversions.

But there aren't any, and probably won't be.

Yet to expect BSB to be anything other than what it is would be a mistake. It isn't Bahrain, Bhutan, Burundi or Dubai. Or wherever else people think it is.

I considered going to see Train of Death again.

On my final day at the bus depot---a block from my rest house, as was everything in BSB it seemed---a notoriously friendly local called Danny showed me laminated write-ups about himself from various international travel magazines. It says something about BSB that a tour guide is of interest and travel writers felt the need to mention him.

I had him steer me toward the fastest bus to the airport.

It went nowhere for an agonising 25 minutes. I stared out the window at the nervous gay-boy I had spoken to the previous day when I came out of Train of Death. He was hopefully eyeing up the few male tourists waiting in the depot with their backpacks and girlfriends. I waved to him. He sent back a vacant, wan smile that was ineffably sad.

Finally the bus wheezed onto the now familiar roads of what I was jokingly calling "downtown'' and, as a final irony in quiet BSB, we were caught in a series of traffic jams as parents picked up children from schools between the city and the airport. It seemed possible I could miss my escape flight.

I collapsed into my seat on the plane, listened to the prayer before departure (it either did or didn't work, the flight was delayed due to "a technical problem''), and considered my short time in BSB.

Brunei is so small the sultan could probably carpet it and it has no particular tourism industry to speak of---despite being a naturalist's dream with rare orang-utan, snakes and exotic birds and plants. It has a fascinating if bewildering history of colonisation and sultans, and is the efficient face of outward-facing but strict Islam.

It is the only place where a Customs official has asked me on arrival if I was carrying any wine. BSB could drive you to drink -- and you couldn't.

But Bandar Seri Begawan -- which, amusingly, almost looks like Bandar Serious Big One -- is what it is. Which, especially in Ramadan, isn't much.

Later, in another country and after a large and restorative drink, I sent an e-mail to someone who had warned me off BSB. I wrote, "Why didn't you warn me?'' and said I hoped he got the joke.

He e-mailed back, “The joke was always going to be on you.''

Maybe. But my brief encounter wasn't entirely wasted. I know few people who can say they have been to Brunei.

But know of absolutely no one who has seen Train of Death.

Least of all in a private screening.

cool story. a woman i knew sent me an email once they were looking for english teachers in Brunei, but it didn't appeal to me. i see why now. 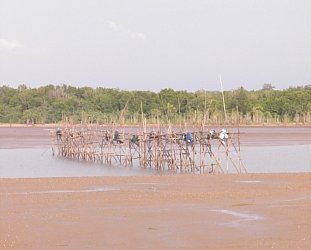