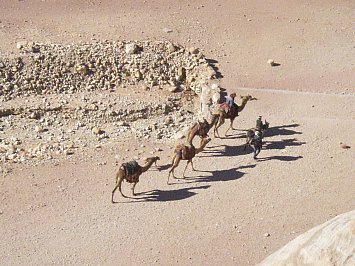 Far below us a camel train makes its way slowly across the bone-dry dirt of the valley floor carrying its precious cargo. In times past this burden would have meant silk, spices, fruits and pottery from distance places.

But today, here at the ruins of Petra in southern Jordan – where the Nabatean civilisation pre-dated their Roman conquerors in this long hidden place – the precious cargo is tourists.

But that makes sense.

In many ways Jordan doesn't have much else going for it; it's a Middle East country with little oil, the vast areas of desert which cover more than 90 per cent of the country are unforgiving and yield not much more than phosphate, and unemployment is cripplingly high. 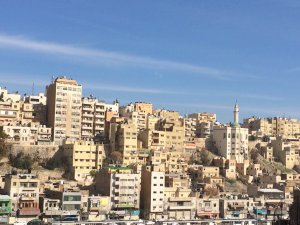 Which means tourists – the Hashemite Kingdom of Jordan's number one earner – are valued, but not that this is necessarily a cheap destination.

Food, fruit, hotels and some of the historic sites are very reasonable, but entry to the major drawcard destination of Petra costs a tidy NZ$100 a head, and it's three hours from the capital Amman (above) so necessitates a journey. 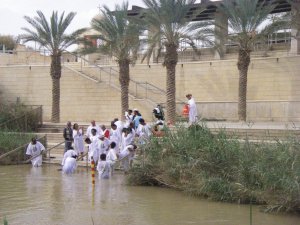 That said, Jordan sits at the crosscurrent of rare history and Middle East politics so is a fascinating – if little visited -- destination.

Yet this is the land where Old Testament figures like Lot (whose wife was turned to salt), Noah and Elijah walked (and in Elijah's case ascended to Heaven on a chariot of fire).

Here is the River Jordan (above) and where Jesus was baptised by John in the Jordan River.

Large chunks of the Bible were played out here. 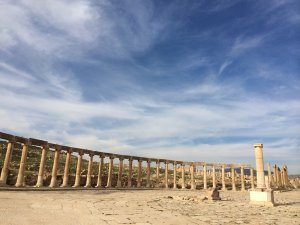 Add in the Nabateans and their astonishing city of Petra carved out of solid rock (which featured at the end of Indian Jones and the Last Crusade, as any Jordanian will tell you), the breathtaking Roman ruins at Jerash (right), the seriously strange Dead Sea, the impressive Citadel and Roman amphitheatre in Amman, plus numerous other castles, fortresses and museums, and you have a country blessed with historic places, attractive ruins and unique diversions.

And Jordanians are not just glad to see you but disarmingly friendly. Not every hello here comes from someone trying to sell you something.

Despite its position at a flashpoint in the region – it is surrounded by Israel and the Palestinian Territories, Syria (from where more than half a million refugees have come in the past two years), Iraq (another 30,000 displaced persons) and Saudi Arabia – the country has negotiated a delicate balancing act and is more stable than many places.

Jordan rightly prides itself on these diverse peoples co-existing in a constantly negotiated agreement between the local Bedouin people, Palestinians, Saudis and refugees. It makes for fascinating conversations, and Jordan an interesting place to be. 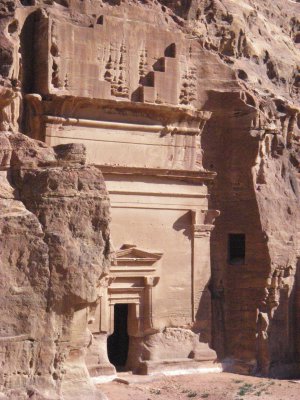 Visitors naturally have Petra as their must-see and it is undeniably breathtaking, made more so by the knowledge that after the ancient Nabateans carved out their sites of worship and tombs in the sandstone cliffs and built a trading city, they repeatedly beat back the Romans. The narrow passageway between sheer cliffs made the city easy to defend, but eventually they were defeated and Romans imposed their own city and buildings in the massive area between the mountains.

But the place was shaken by a series of destructive earthquakes, and 1000 years ago Petra was all but abandoned. It largely disappeared, known only to Bedouin, until the explorer Johann Burkhardt -- who learned local languages and ingratiated himself to the Bedu – was shown the entrance in 1812.

While walking down the passage between the sheer cliffs, our guide Hamad stops to point out barely visible carvings of camels and Nabatean shrines which have been eroded by time. When the landscape opens up to reveal the enormous Al Khazneh (“treasury” as seen in Indiana Jones) you cannot help but be impressed.

But then – right next to donkey chained to a sign which reads “No climbing” – Hamad indicates for us to follow and we climb a rugged path up the side of the mountain and into ancient Nabatean tombs carved into weirdly striated sandstone.

It is here we look down on the camel train and tourists below, and the whole of ancient Petra – much of it now in ruins with building stones shapelessly scattered across the valley floor. Later when we clamber down further on we stare in silence at remarkably intact mosaic tiles in an ancient church. This is a land of sultans and citadels, Roman ruins and unfathomable religious rites.

Today Petra is one of the great wonders of the world, although certainly not the only one Jordan can boast. If the River Jordan is a disappointment other than for its religious connotations (it is neither deep nor wide and in summer the baptism site is dried up) then Jerash about an hour north of Amman is one of those surprises you cannot adequately prepare for. 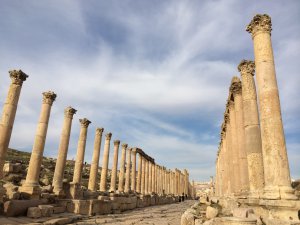 Here are Roman ruins which stretch across low rolling hills, where an avenue of columns goes off to a vanishing point down the main thoroughfare, building stones are the size of a small car and temples have an awe-inspiring, almost living, presence.

If the ancient of city of Petra is hard to discern as a result of quakes and being abandoned, Jerash still feels like a place where traders, citizens, soldiers and priestly dignitaries walked. The massive hippodrome invites you to imagine chariot races.

Even for those who have seen the Coliseum and Forum in Rome, Jerash is an eye-opener.

And Jordan is full of such places, not the least Mt Nebo just south of Amman. It was here God showed Moses the Promised Land, presumably the fertile valley by the Jordan River which must have stood out as a green belt in this arid and unforgiving landscape of bleached rocks and dry dirt.

The famous Dead Sea even deader now. On the way there from Amman is a roadside sign marking you being at sea level. It shows the Dead Sea to be 390m below this point. In truth today it is now more than 420m below due to evaporation, diversions in the River Jordan which fed it and, according to my Palestinian pal Abu, because the Israelis on the other side are taking water from it. 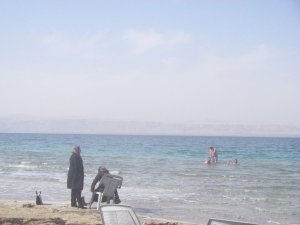 Quite what for he doesn't say, but bottles of the thickly salted and curiously oily water do a roaring trade in cosmetics and as a treatment for various ailments.

After a swim – and you don't let the water on your face let alone open your eyes underwater – the body is covered in an oily film which dries into a fine layer of clinging salt. It's an experience you might say is “interesting” and you'll be glad you went.

In fact, that could be a metaphor for Jordan. Immerse yourself in it and it clings to you.

And you'll be glad you went.

Except if you go the baptism site in summer. See here!

Brilliant country, great people, thoroughly recommend a visit. It's all and more than Graham says above.