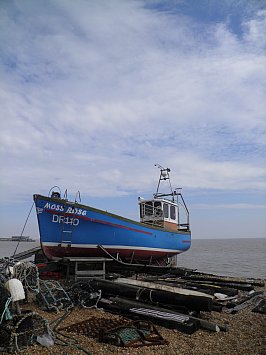 The chatty lady at the Canterbury Tales Museum is surprised when I tell her where I'm going after leaving historic Canterbury with its famous cathedral and fascinating history which starts at pagan Britain and moves through Roman occupation.

“Deal?” she says. “What do you want to go there for? There's nothing at Deal, love.”

She's not the first to express surprise which barely disguises amusement. But it is the nothing at Deal on the south east coast of England which is its appeal. And the getting there.

Deal has a few typically English historical sites – a squat castle, a pier, a museum and so on – but it also offers the mundane: a beach of pebbles you can't sit comfortably on, old homes along the front, signs which advertise the local cuisine “fish and chips” and . . .

And really it is about the getting there. 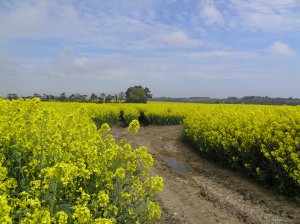 The back road drive from Canterbury is mostly a 50mph single lane road which eases slowly between rolling fields -- some made blindingly golden with rape flowers at this time in May – and small villages where front doors open onto the narrowest of footpaths beside the sliver of road.

My journey in truth will take me past Deal and down to Dover, and I'd been told by the most reliable of sources – a man in a pub – that it really was a trip worth making. He too had said there was nothing at Deal but when he described the extent of the nothingness, it sounded oddly appealing. To Deal I would go, and then Dover where there was very much something.

The road east out of Canterbury has me cutting through colourful and dense copses where branches hang low over the road like a spring canopy. Here are places with names like Pilgrims Inn – this was the route pilgrims from France and the east would take to see the grave of Thomas Becket, famously murdered in Canterbury Cathedral in 1170.

The smooth and well cambered road snakes lazily past green or golden fields, orderly farms with picture perfect barns, pubs and homes so old they have sunk into the earth, and open plains where the sky is bold and brassy with massive clouds shipped in from a dramatic painting by Turner (who, incidentally, spent a lot of time at Margate just to the north).

This is a working road too, so every now and again I am behind a man on a tractor going from one lush paddock to another. There are cheery waves . . . but then often enough the road opens up ahead and there is no traffic in sight. This has a curious effect, rather than speed up it gives me the opportunity to slow down and drink in the landscape, stopping to stand beside vast yellow fields of rape flowers.

Somewhere on another more direct route to Dover there is a motorway, but here is a rural road to relax on until Deal, where there isn't much to do. But what does it matter? 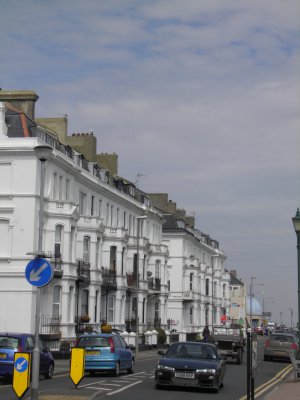 I stretch my legs, walk along the front, enjoy a town in retirement from haste, get the smell of the sea in my lungs and sit on a bench watching kite fliers and women selling fish right beside the rough wooden boats which have caught them.

The air is rich with life and the smells of salty ropes, tar and fish guts.

I amble along the promenade reminding myself that the Carry On actor Charles Hawtrey retired here for a life of alcoholism and overt homosexuality, wandering these very boards and waving to hearty fisherfolk. He didn't think there was nothing in Deal.

I give the famously squat Tudor castle a miss – the queue is too long and I have Dover Castle in my sights – and get behind the wheel again, climbing out of Deal and hugging the coast to Dover about an hour away. 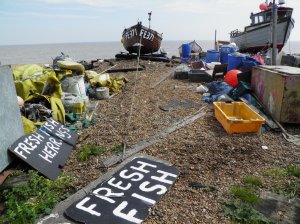 Again the road feels part of the landscape, the landscape part of the huge sky above, as I get glimpses of the channel again . . . and somewhere just over there, visible about half the days in a year, is France whose medieval political history is imposed on this region.

Suddenly, massive Dover Castle is beneath me briefly, then the road takes a steep dip and it is towering above. Less than half a day's drive from Canterbury through quintessential English scenery, a digression to delightfully ordinary Deal, and now this.

I spend the afternoon at the extraordinary castle and down in the exceptionally ordinary town, then – as spittles of rain fleck the windscreen – I aim the car back to Canterbury on the much duller but quicker main road. I am there by 5pm.

By sheer chance, as I am looking for a parking space, I see the woman from the Canterbury Tales leaving work.

It's very tempting to pull over and tell just how much of nothing I had seen on an easy drive in beautiful rural Kent. Exactly the right amount of nothing, and yet so much at the same time.

There are other stories about Dover and South East England here and here.

Somewhere about 300km southwest of Alice Springs on a largely featureless strip of the Lasseter Highway I slow down for the laughably named Mount Ebenezer. It is little more than another... > Read more