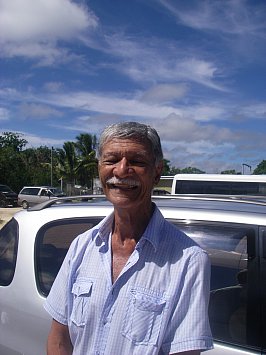 About 90 minutes into our drive around the island – during which he has kept up a running commentary full of digressions into local history and politics, fishing, geology and much more -- Hima Douglas happens to mention he was once assistant finance minister in the Niue government.

Then he laughs and says, “Now you're going to ask what I haven't bloody been!”

True. Just 10 minutes ago up by the local branch of the University of the South Pacific he'd said in passing he'd been its local director and, if I remember correctly from when he picked me up, he and Russell Kars had been behind the building of the impressive cliff-top Matavai Resort where I'm staying.

And when we'd stopped at one of the many excellent and informative signs which identify historic spots or important sites on Niue he'd noted that previously he'd been the chair of the tourism board.

He was also Niue's first High Commissioner to New Zealand based in Wellington.

These days the witty, astute and knowledgeable 67-year old is a director of, and driver for, Toamana Tours and Travel . . . but he also has a fishing charter, does eco tours, arranges accommodation . . . The following day someone says, “and did he tell you he was also a pilot?”

Jeez, what hasn't he bloody been?

A while ago Douglas retired “but after two weeks at home my wife said I needed to get out of the house”.

“Yes, and saying 'What are you doing now?' and she'd say, 'Vacuuming'. So it was time to do something with some of the knowledge I have.”

And what knowledge: the funny story about how Matavai Resort got a generator big enough to power the hotel and quite a few neighbouring properties (Kevin Rudd the unlikely benefactor); why the old school he attended in the village of Avatele was abandoned and its traditional construction of kafika timber and powdered limestone is now in disrepair and open to the elements; the places where buildings once stood before the 2004 cyclone and sea surge took them away . . .

His photos of the latter are testimony to the power of indifferent Nature out here on an island so remote it boast a featureless horizon as far as you can see in every direction . . . and then some. 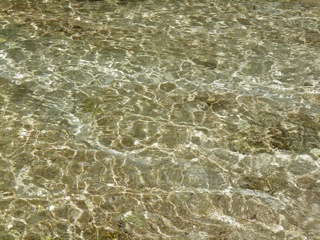 Yet the water is so beautifully clear it looks benign.

Because he's the man to ask I bring up the topics of the influence of the Chinese government in Niue, the New Zealand aid money which keeps many of the major projects afloat, the issues around customary land . . .

We get to famous Washaway Cafe where he says they have “the only honesty system bar in the Pacific, you order what you want and get your own drinks then settle up later, of course people stay too long so tip $5 more”.

Although Niue – which you can drive around in about 50 minutes and has a population of about 1500 permanent residents scattered through a dozen or so villages – seems small, in Douglas' telling the storylines run wide and deep, and are often very amusing.

I hear about how much of the nine-hole golf course was constructed by the inmates of the tiny prison he refers to as Her Majesty's Hotel, and he points to a flat and familiar looking patch of grass nearby.

“Yes, it's a bowling green. We wanted to enter a bowls team for a Commonwealth Games – I can't remember which one -- but they said they couldn't enter unless the country had a green.

“So that's it. But it's never had a ball bowled on it. You can guess where all our bowlers came from.”

Auckland of course. So we talk about how people have left the island, the stories behind some of the many abandoned buildings which pepper the villages and -- as we head to Tuapa village, the traditional seat of government before the missionaries came and home of the last king -- we stop at the grave of Nukai Peniamina, a local boy who brought Christianity here in 1846 after being trained in Samoa.

Douglas tells of how Peniamina was shunned by many people on his return – largely because the ships which had come with Europeans had brought illness and disease to remote Niue – and how he was protected by warriors in Mutalau village. Only in recent times has he been acknowledged as a pivotal character in the island's history and the country now has a national holiday in his honour in October.

“He also had an eye for the young ladies, but that's something you won't read about in the books”, says Douglas, his eyes twinkling with mischief.

And in his numerous stories about local politics, which I agree to keep off the record, I hear about . . . just “off the record” stuff, and again mostly funny. 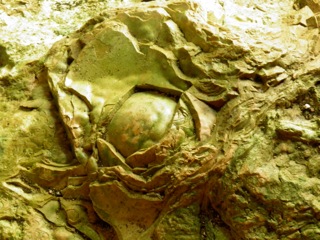 Niue is a delight anyway. It is quiet but there's always something going on, most of the things you want to do are free or cheap (swimming in the clear water is almost a reason to go in itself), the geology is bizarre to the point of being surreal, and if it doesn't boast much by way of vibrant nightlife you can always strike up an easy first-name conversation and see where that leads. You also can't get lost in a place with so few roads.

But when Douglas tell his stories the place comes alive, layers are peeled away and much more of Niue is revealed.

And this remarkable island is place where a former MP and High Commissioner drives you around. That probably isn't something which happens anywhere other than on Niue.