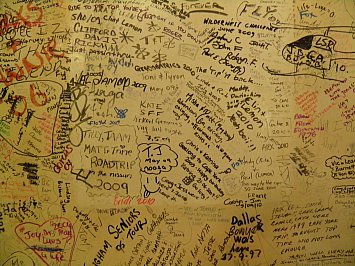 If you're heading south on the Mulligan Highway from Cooktown in Australia's Far North and turn off onto Shiptons Flat Rd towards Lion's Den Hotel, chance are you're going to the Lion's Den Hotel. Because beyond that the road is an endurance test unless you have a four-wheel drive, an iron constitution able to withstand the rugged terrain and nerves of steel when you come to the Jump Up which seems almost vertical on the partially sealed incline and terrifyingly the same on the unsealed descent.

Negotiate all that – and the Jump Up is impassible in the rainy season anyway – and Cairns lies somewhere quite a few hours ahead.

But chances are if you are on Shiptons Flat Road you're only going as far as the pub because it's a destination in itself.

No one appears to willingly give the accurate story about how the place got it's name (and the ugly plaster lion at the front entrance) but one version goes an early owner was named Daniel and so . . . 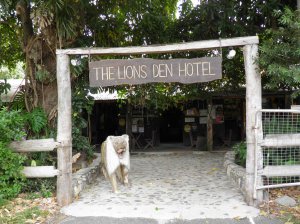 “But they'll string ya'long with a yard of rope, then hang ya with it,” says rheumy-eyed Ray sitting at the bar. “Have a look around, if you can see anythin' worth lookin' at.”

Despite the dust-dry delivery, he's joking of course. Because at the Lion's Den Hotel every square metre of wall is covered in scribbles, signatures, messages, drawing and much else besides.

The only bit not decorated in this rough-hewn manner is the sign taped to a wall near the outdoor toilet which reads, “DO NOT Write ANYWHERE on the pub without ASKING first at the bar”.

Over by the pool table are other signs which give some of the history of the place and suggestions for the origin of the name, among them the story of young Daniel who worked at the nearby tin mine and was spotted one day at the dark entrance. He was characterised as Daniel in the Lion's Den by a local, and the pub tok it's name from that.

Or an alternate version says the original owners took the name from a pub in their native Devon.

The hotel was established in the late 19th century when this was a thriving tin mining area and run by the same family and its descendants – Annie Ross' first husband Jack opening it with her, dying at 23 and she remarrying to George Watkins – from 1875 to 1964.

The origins of the graffiti date back to the days when miners would write on the walls how much they owed or had spent from pay packets they'd leave behind the bar. A few of the original names remain but mostly it is felt-tip and ballpoint scribbles of passing travelers which take up the space. Most of them are of the “we were here” variety with a date, but a few are humorous and some attest to the sobriety of the scribbler. It wasn't until I got home and looked at a random photo I'd taken of an area that I read what one woman had done intimately with another the previous night before recounting it in print amidst the other scrawls and signatures.

And despite the hotel being well off the main route, a surprising number of international visitors have made their marks.

The bar itself is covered in stickers and cards, from the rafters hang the skulls of cattle, autographed underwear and caps, discarded overalls, flags and banners of many nations and places . . .

“Must be a bugger to dust”, I say to Ray who utters a grunt of acknowledgement and goes back to diligently sipping his beer.

There is accommodation at the Lion's Den, a surprisingly attractive garden bar with exotic plants (and memorabilia) at one side and on the other is an odd little museum of old ceramic and glass bottles, fading photographs, newspaper clippings and tins, preserved snakes, and bits of things which can only be described as “stuff”. 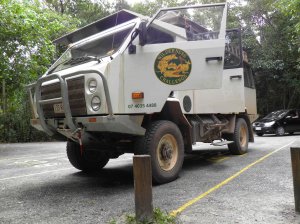 At the bar they had a $20 CD by the Roadtrippers. It was entitled 100 Smokes to Kununurra and contains those ever popular hits Roadtrip to Melbourne, Down and Out in Cairns, Bruce Highway and Desert Door.

But if you're heading south from Cooktown the Lion's Den Hotel is certainly worth the digression.

You won't want to go much further down that road to Cairns like I did, unless you have a four-wheel drive, an iron constitution . . .

For more stories about the Far North in Australia see here. 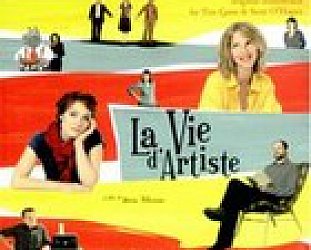