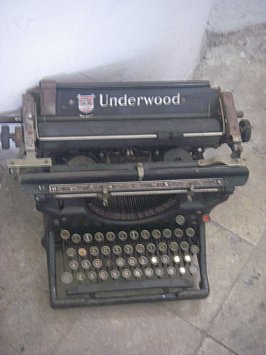 There’s a typewriter in Heaven. I’ve seen it -- and for me, who has spent a good part of my life tapping on a keyboard, this was a depressing discovery.

I’d thought Heaven, if I got there, would mean happy-hour all day and my favourite bands playing every night.

Seems it’s going to be Groundhog Day at an old Underwood instead, not even a laptop with spell-check.

The good news however is that from Heaven there’s a spectacular view. 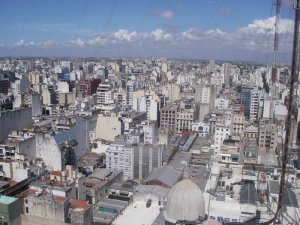 I went to Heaven with Miqueas Tharigen who, twice a week, offers a guided tour of the eccentric-looking Palacio Barolo on Avenida de Mayo in central Buenos Aires.

At the top is Heaven.

The highest building in South America when it was completed in the early Twenties, the Palacio Barolo was designed by the architect Mario Palanti for the businessman and agricultural entrepreneur Luis Barolo, both of them men more than slightly obsessed with Dante and his mostly unread and largely unreadable epic poem, The Divine Comedy. 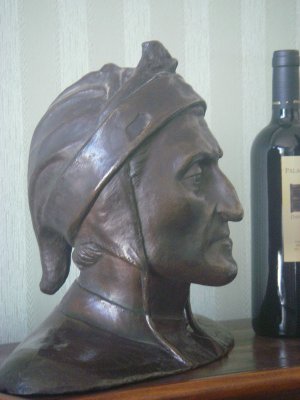 It was Barolo’s intention to have the massive building -- which covers a whole city block and even today rises high above its neighbours -- designed as a tribute to the great Italian and his visionary, religious masterwork.

Put simply: Hell is the enormous and airy lobby, Purgatory about the middle floors and Heaven high above. There are complex mathematical and numerical references to The Divine Comedy in the design but what it means in reality isn‘t much, to be honest.

There are demonic figures sculpted in the corners of the enormous entrance passage (Hell, you’ll recall), but if you are expecting inspirational or terrifying murals of Dante’s work then you’ll be disappointed. There are none, it’s all in the maths.

Tharigen, who speaks decent English, has a wry wit: “Now I am going to take you to Heaven,” he says as we step into a lovely old iron-framed escalier. If only we’d known it was as simple as getting in a lift we’d never have bothered with church, Sunday School, all those rabbis, imams, preachers and priests.

But if Hell was just a few demons in places where you might normally expect cobwebs, then Heaven is a disappointment. Just another bland corridor between offices . . . and that accursed Underwood. Outside Heaven on the tiny balconies is where Palacio Barolo comes into its own for those not of the mathematical or Dante persuasion. From up here the city sprawls to far horizons.

There is however, says Tharigen, a place even higher than Heaven as he leads our small party up an ever-narrowing stairwell. He takes us to the lighthouse in a dome, the light from which is visible in Uruguay across the wide and muddy Rio de la Plata in the far distance.

The dome is cramped with just six people, but the view is spectacular and doubtless becomes even more so when Tharigen hosts his wine-tasting sessions here at dusk. 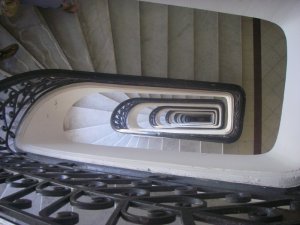 The Palacio Barolo is a beautiful oddity: it is nominally neo-Gothic but has elements of Indian design in its windows and domes, and when I ask Tharigen why there are no photos of the architect in his office (plenty of hook-nosed Dante) he says bluntly, “He was a fascist so . . .”

That’s Argentina, a country where politics is barely beneath the skin.

Two days later I am back at Palacio Barolo to show it to my wife. In the lobby we meet Tharigen and he remembers me, the journalist he took to Heaven and who was shocked to see a typewriter.

We laugh about it, then he seems to turn serious.

“Ah, yes,” he says as we stand beneath a gargoyle. “And now you are in Hell.”