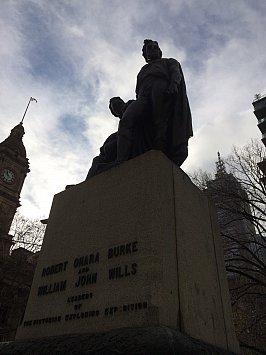 Barely two minutes walk from furiously busy Flinders Street Station in central Melbourne is an extraordinary sixth floor museum which few locals know about. And even fewer visitors to the city.

“Amazing, isn't it?” says Andrew Gaynor when we get back down to Bourke Street afterwards. “I didn't know about it myself until 18 months ago.”

And if anyone might have known it would be Gaynor who — when not curating exhibitions or pursuing research interests — is a guide on one of the city's Art Aficionados walking tours.

In our 90 minute amble through just a few streets around the famous station he has pointed out sculpture with a backstory and unusual buildings, taken me to a delightful shop selling jewelry, toys and oddities named Corky Saint Clair (an in-joke for those who know the film Waiting for Guffman), and pointed out ceiling art and murals which in our haste we might not otherwise see.

But it is that museum which is the most impressive and least known. On the top floor of the historic Salvation Army building — originally bought in 1885 by the YMCA – and purchased from them by the Sallies 15 years later — is their museum, a few small rooms of lovingly curated cabinets of photos, memorabilia, medals and mannequins in Army costumes. Fascinating.

But it is the unprepossessing room next door with its old wooden walls all but bare where a remarkable history is revealed. This is the Limelight Department, a studio which made the first films in Australia starting in 1892.

Using Army members as the cast and photographing them against painted backdrops, the Salvation Army made an extraordinary number of religious and historic films.

“In fact when Federation came in 1901,” says Gaynor, “the Salvation Army was the biggest film production company in the country so they filmed a lot of the celebrations.”

And sure enough, here is flickering footage of a parade through the streets below from those distant days.

More impressive however was the film and multi-media presentation Soldiers of the Cross produced the previous year which used hundreds of glass lantern slides, each about seven centimetres square and the images, costumes and backdrops individually hand coloured.

It's said Cecil B. de Mille was inspired by Soldiers of the Cross and in time began making his own religious epics such as The Ten Commandments (1923) and The King of Kings (27).

This two and a half hour epic costume drama was acted out, images were projected by the “magic lantern” powered by brightly burning lime and it was accompanied by music from the new fangled gramophones.

Apparently there were once scores of these gorgeous lanterns slides — a few are also in the nearby Australia Centre for the Moving Image in Federation Square – but as so often happens, many were just thrown out decades ago because no one could see their value. Illuminated from beneath in a lightbox, their beauty and workmanship however is self-evident.

As Gaynor and I stand on the busy street below we look at each other, shaking our heads in wonder at what we have witnessed in a small, little-known room just a minute's walk from where we met, beneath the heroic 1865 statue of Burke and Wills on the corner of Swanston and Collins.

The first major cast sculpture to be conceived and created in Australia, this massive piece by Charles Summers has had a peripatetic history since it was first sited on the corner of Collins and Russell. After that it was moved twice before finally being placed in its current location a little over 20 years ago.

Gaynor points out the Aboriginal characters and the classical poses of the explorers in their death throes then we slip up the road where he gets the door open so we can see inside the exotic and slightly garish décor of the Forum theatre (think a pocket edition of Auckland's mighty Civic). We move on to the Greek Revivalist style of the Nicholson Building on Swanston and while passing St Paul's Cathedral he casually notes it is the second highest Anglican spire in the world after Salisbury Cathedral. Gaynor points out the extraordinary 1907 murals by Philip Goatcher in the Block Arcade, the former Coles Book arcade (we drop down to look at the vinyl in Basement Discs) and the elaborate facade of the Manchester Unity Building which was inspired by the Chicago Tribune building.

It is an enjoyably informative walk and the good-humoured Gaynor frequently drops in casual references (over there was once Val's Coffee Shop, the haven for gays and lesbians from the Thirties onward) and saves the best for last.

Later we shake hands and I go into the nearby Manchester Unity for another look at the murals, and then back to the Nicholas Building for the terrific vintage clothing store RetroStar, the esoteric bookshop and a couple of small galleries.

But my head and heart are still at the top of that building in a tiny room full of rare beauty which so few know about.