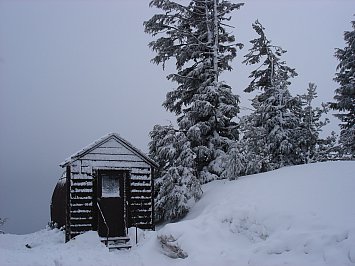 This is just an opinion: but nowadays it seems more difficult to find a really bad meal than a good one.

That is unless you are in McCloud, a small town at the base of photogenic Mount Shasta in northern California.

McCloud isn't on too many tourists' agendas---it is well off the highways and seems to be at the end of long dead-end road---and that is probably just as well if the kitchen at the famous Soda Shoppe on Main Street is any measure of the town's culinary prowess.

I have eaten plenty of mediocre meals in my time -- haven't we all? -- but truly bad meals are so rare as to be memorable. You can dine out, so to speak, on a story about a bad meal, and in my experience very few people want to hear what delights you enjoyed at some expensive haute cuisine restaurant with white tablecloths.

The worst meal I had eaten before my wife and I arrived in quirky McCloud was at a roadside stool'n'spit place in a dark backstreet of Hanoi.

Let it be noted I grew up in Scotland where a steaming ox tongue plonked on the middle of the dinner table was not uncommon. As comedian Billy Connolly once noted, Scottish food is a dare.

So in my travels I have had fried wasps' larvae, a live snake skinned before my eyes and warmed in its own blood, chicken fried steak in Texas (a perfectly good steak fried in thick batter is a crime against the palate) and other such oddball or exotic treats around the planet.

But all of them were at least edible, and in fact somewhat tasty, compared with the offerings that night in a dog-shit alley of Hanoi.

Of the three pots of aromatic gruel I chose the stew made from horse. I'd had had horse before, in France, and it was delicious. But this wasn't horse. At best it might have been nag.

In time I forgave the cooks in Hanoi --- although later did note that I rarely saw a horse in Vietnam, live or dead --- because they may have had limited or inferior ingredients to work with.

I doubt that could be the excuse at McCloud's Soda Shoppe in wealthy California, housed in a historic corner store built in 1895 when this was a once thriving timber town. This was the town's original grocery, which in subsequent decades became a druggist, hardware store and a few other things besides.

Today it is a cafe-restaurant and the tacky walls are lined with work by local artists who have all painted exactly the same thing. I guess that's what happens when your landscape is dominated by a massive mountain.

The town itself is 1000 metres above sea-level so the air is clear and heady, which might explain some of the eccentric housing in its half-dozen wide but deserted streets.

It seems that in McCloud if you collect empty bottles and jam jars, or oddly shaped boughs of wood (which I imagine is not difficult in a timber town) then you display them prominently along your front porch.

There is a museum for the more valuable and historic stuff, but since the timber business wound down in the mid-80s McCloud --- a more romantic variant on the name of its founding figure Alexander McLeod who trapped beaver around here --- is now a town which relies on nearby fishing and folks who want to take in a view of the much-painted Mount Shasta

The weary traveller is therefore warned about stopping for lunch at the Soda Shoppe with its hard chairs, simple tables and astoundingly evil burgers.

The coffee I ordered appeared in an instant --- it was instant --- then the burgers followed.

Megan ordered hot turkey and I thought beef and cheese sounded good. This is simple fare and difficult to get wrong --- you might think.

What arrived for Megan was cold turkey slices placed between slightly warmed buns, mine was much the same although I didn't detect any cheese with the beef. In truth however it was hard to discern anything in the slops which lay before us.

The chief ingredient, added by the ladle-load, was ketchup. It flowed into every crevice of the buns and fillings, and was lapping the edges of the plates. Our meals looked like autopsies in progress.

We would have laughed aloud but we were stunned by the lush red appearance of what was presented to us with something approximating a smile. We thought of sending them back but this was too absurd to be true, and too doused in ketchup to be edible. 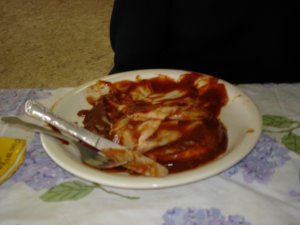 We stared at these viscous messes for a while, I poked mine with a knife checking for signs of life then managed to down some of it by washing it away with sour instant coffee from the chipped mug.

But Megan gave up, utterly defeated by its appearance as much as the torture of drinking ketchup with some solid bits. I took a photo of the whole sorry mess and we left.

Uncomplaining, I paid the bill of US$14.50 --- to be fair that also included the teabag and cup of warm water for Megan --- because it was worth it just for the experience.

No, you can't dine out on a story about what a lovely meal you had in a restaurant these days; everybody has nice nights out.

But ketchup burgers at the Soda Shoppe in weird little McCloud have been good for a few laughs over dinner tables.

As we drove away, up towards that much rendered snow-covered mountain, I said to Megan, ``You know, despite it all I'm still hungry.

In the interests of fairness, this story was written in late 2005 so the cafe may well have changed hands and the menu improved, the decor may also have changed or it might have even burned down.

Anything, anything at all, would be an improvement.

The mountain is pretty though . . .