If a bug no bigger than a pinhead flying into your mouth is a memorable moment in your day, then your short time on this earth is being frittered away needlessly. Such a bug flew into my mouth as I needlessly frittered away a precious day.

Only a crazy person would want to spend 24 hours in an airport, even a fancy one. But by circumstance then choice, that's what I did in Dubai International's famously huge and busy terminals.

It should have been easy and interesting. After all, the writer Pico Iyer spent weeks living in LAX, and Dubai (aka DXB) is much bigger but . . .

It's impressive. But only if you're passing through, which had been my intention.

However after econo-class flights from Auckland to Melbourne then Dubai in an uncomfortable middle seat I arrived weary, jet-lagged and unfocused. 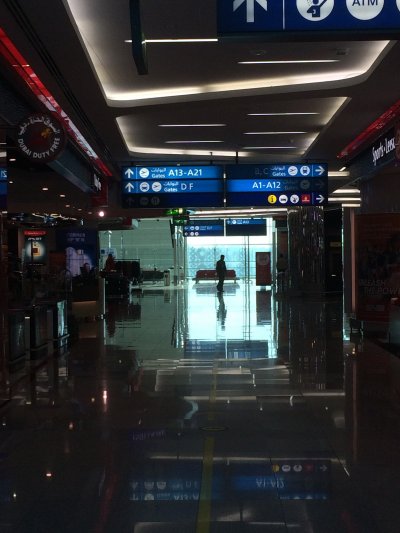 I had hours before my onward connection to Stockholm so waited at my gate, read a bit and sent a text to my wife saying I’d be boarding soon. Then fell sound asleep.

In Dubai's suburb-sized Gate C – because there are so many flights — they often don’t make departure announcements. Or page passengers dozing beside the counter. When I woke, still surrounded by people, the departure board read, “Gate closed”.

A sprint downstairs, some pleading as the last passenger disappeared on board . . . No luck.

Embarrassed – and angry with myself because I've never missed a plane -- I had to get on the next flight.

That – surprisingly since Dubai is the Emirates hub — wasn't until the following day and, because the fault had been mine, I ponied up $522 on top of the $2400 I’d already paid for my round trip from Auckland.

Yeah-yeah, I could go into Dubai. But I’d been there before so had seen “the sights” and sought out some less-than-photogenic aspects of that glitzy city. But it meant finding a cheap hotel, tramping the 24° streets (already dressed for -2° Stockholm), then up at 4am to be back for the whole boarding/search rigmarole again . . .

So with bleached Dubai outside the windows I undertook The 24 Hour Dubai Airport Challenge and stayed.

As only a crazy person would do. But, optimistically, this was that rarity in the modern life: An enforced halt, time to just be anonymous and do nothing. So I welcomed The Challenge.

After my concourse cleared about 10am I bought two newspapers, the local Gulf News and some fancy American thing with International in the name. They set me back about $NZ20 and gave meaning to the phrase familiar to capitalists: “a captive audience”.

They filled an hour. Just 23 more to go.

For a while I read departure boards which held mystery and wonder (Accra, Doha, Mauritius) and then every now and again “Auckland” . . . so very far away.

I chatted with a disconnected stewardess from Barbados who’d just started working out of Dubai. I said, “This feels like the centre of everywhere but it's actually a long way from anywhere”.

She laughed loudly and said wearily, “Honey, ain't I knowing that”.

And this is the paradox of airports, they pretend to be a destination in themselves but are little more than malls for transients . . . with free Wi-Fi.

She left, I stayed. And stayed.

By noon the previously hyperactive Gate C had become a ghost world, inhabited only by a few bored cleaners, shop assistants reading their phones and dirty stop-overs like me. 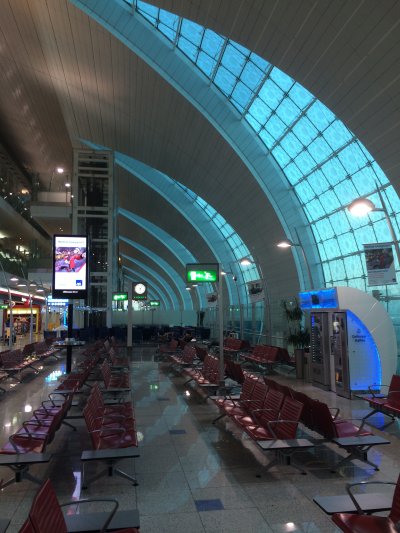 I had hours in the empty concourse to consider the architecture, great arches of white steel which made me think I was inside the bleached ribcage of some leviathan. I suppose I was.

Downtime however is an opportunity to ponder the great questions of our time: Like, which is the more annoying traveller, the persistent snorer or the intermittently flatulent one?

The young Indian man straight from the smokers' lounge who chose to sit two seats away in the deserted concourse proved to be both. I moved on, plenty of other places to sit.

Some young people from the Sheraton came by and offered me a free pillow and blanket . . . then took my photo and asked me to sign a waiver. I'm coming to a hotel in-house magazine soon. I'm the one looking like a tramp wishing he were anywhere else but Dubai's clean and deserted airport.

I dozed fitfully, had strange dreams about my adult children as little kids and some weird castle, woke to rows and rows of empty seats, charged my phone and dozed again. Later I found the free showers — no soap, no towels (thank you Sheraton for that multi-purpose blanket).

In the very late afternoon I shuffled past a shop where I could have bought How To Have A Good Day by US economist Caroline Webb which was being given very high-profile. But that would have been cheating. And anyway, every day is a good day.

I found a corner and slept, only to be woken by a call to prayer.

As the sole patron in a bar I watched Donald Trump on television, walked around the enormous emptiness and along an avenue of perfume shops. Are we really that smelly we need all this stuff, these many options?

I was a victim of Morpheus, a solitary beast left behind by the herd, doomed to wander the fluorescent wastelands of Armani, Chanel and Minolta.

I bought a steak with mashed potatoes and a glass of wine: $108. With the swipe of a card I became an indigent transient . . . with free Wi-Fi. 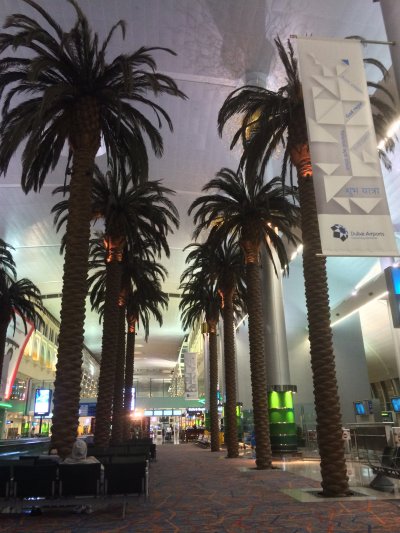 As I waited near the generically-shamrocked McGettigan's (an oddly familiar logo and five million transients served monthly) a young Arab man came up, shook my hand and said, “You are very nice looking”. Then, quietly as he walked away, “I like you”.

Not long to go.

I charged my phone again just for something to do. The airport became more and more busy after 10pm. At 2am it was heaving again.

Dubai – little more than a large sand-trap half a century ago — will soon have the largest airport in the world. In fact, it may well have become so in the time it took me to get from Gate C – by walking, lift, train, travelator and more walking – to my new departure gate.

Sitting under the towering indoor palm trees I was weary but wide-awake and eager to get on that plane. I made damn sure I did.

You could easily spend 24 hours in Dubai airport.

But are you a crazy person?

If a bug flying into your mouth is a highpoint . . .

Well, jet lag does some weird things to a traveller, for the price of that dinner you could have had a decent sleep in a hotel bed, plus a bit more of course.
So many of us will sympathise.... I spent many hours in LAX, a civilised part of it , with my son, then 10, thinking we were in the right terminal to carry on to Ak, realising at the last minute we weren't, running and excusing ourselves to all and sundry on the way to another section of the airport, puffing our way through various security checks , to just make it onto the plane. Landed at 2:30 a.m , both went to our separate schools that day, slept well that night!

This brings back happy memories of losing my mind during Dubai stopovers - nothing as long as yours though. It's never a good sign when you drink copious glasses of water just because using the gents helps to pass the time.

Dubai airport is a truly dispiriting place. I've sworn never to fly via UAE again, but we'll see how compelling the next flight deals are, I guess...