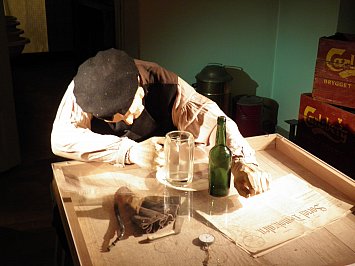 Here's what we know about a tour of a brewery, vineyard or distillery: The interesting bit — the only important bit, unless you are into fermentation or like digging your paws in hops — comes at the end. In the tasting room.

Five'll get you 10 that no one who's done the tour of the Guinness factory in Dublin can tell you two facts about the brewing process of this gold standard drop (other than the water doesn't come from the River Liffey).

But everyone will talk about the rooftop bar at the end of the tour where long glasses of this wonder-drink are served up as part of the ticket price.

However at the Carlsberg Brewery in Copenhagen, the pragmatic Danes offer tastes of various products in the very first room, so you can sip their Indian Pale Ale while you read the story of this remarkable brewery founded in 1847 by the even more extraordinary J.C. Jacobsen (known as J.C. or simply The Brewer) 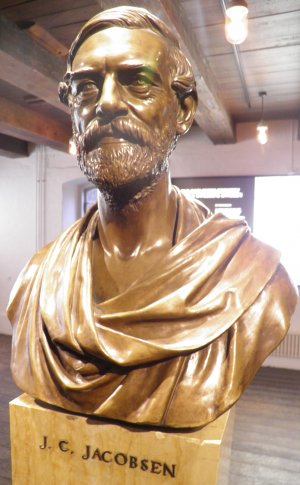 Carlsberg – named for Jacobsen's only son Carl who took over the business after his father's death in 1887 – is the fourth largest brewery in the world and sells almost half its beer into Russia.

The Carlsberg story is an interesting one — told in the excellent Jacobsen biography The People's Brewer by Anna-Lise Bjerager, available in the gift shop — but brewing in Denmark has a long history.

In fact in that first convivial room there are photos of the teenage “Egtved girl” from around 1370BCE whose remains were found near a village west of Copenhagen, not too far from modern day Legoland. At her feet was a bucket of beer made from honey, wheat, bog-myrtle and cowberries.

The display also features a very amusing advertising film from 1937 for Tuborg beer (which was assimilated into Carlsberg in 70) in which topless “prehistoric” women grind grain as beardy Nordic men carrying shields come back from conquest in a longship and celebrate their plunder by chawing on animal bones and washing it down with great slugs of beer. 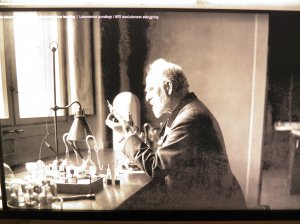 The growth of the Carlsberg company — both father and son were great nationalists and philanthropists, dad the prime mover behind the reconstruction of the Frederiksborg Castle and founding the Museum of National History which it houses, son Carl donating the famous, and much beleaguered, statue of the Little Mermaid in 1913 – is a story of hard work, enterprise and science.

The Brewer – who treated his wife, son and workers as people to be ordered into shape, but who could also be exceptionally generous and was immensely proud of Denmark's heritage — engaged with the scientific community to find better ways of brewing. And he was up against plenty of competition in the late 19th century. It seems about every third doorway in Copenhagen at the time lead to a small home brewery. 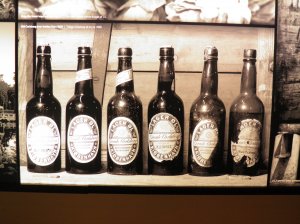 He established his factory outside of the city at Valby near a small hill (“Bjerg” is Danish for mountain, he chose that part of the name to ironically refer to Valby Hill) and over the many decades it expanded into what we see today.

Or actually, what we don't.

A Visit Carlsberg self-guided tour (“the Copenhagen Exbeerience”) takes you round the original brewery, the sculpture garden, museum of vintage delivery vans, the stables (yes, horses are still there) and of course the gift shop. But the huge site is currently undergoing major reconstruction. 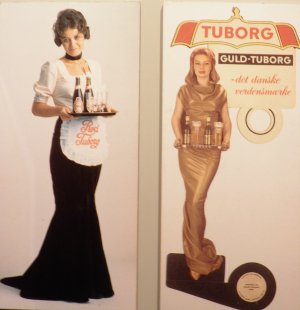 The booze is now brewed elsewhere so the 10 minute walk from Enghave Station south of the central city is past a busy construction site (think massive trucks) and on the damp and cold day I visited, through a bloody slippery and obviously unused children's play park, it was a miserable slog.

But the reward came quickly. Within two minutes of buying my ticket I had my first pre-breakfast beer in hand and a fascinating history before me.

At the end with one more beer ticket, and looking out at the wind-chill drizzle, I redeemed it at the comfortable Jacobsen Brewery and Bar on the top floor where I had a superb herring platter with smoked cheese, boiled egg and capers, plus bread with a pork fat spread (butter was on offer, the young waiter suggest I go the traditional route).

It was among the best I ate in Copenhagen. 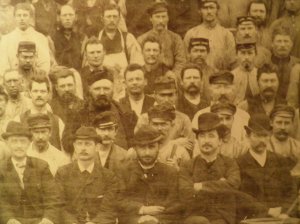 I also read that fascinating biography of Jacobsen who was estranged from son Carl for many years and they were only reconciled shortly before his death.

Old man Jacobsen was a complex man: a philanthropist and nationalist, generous in sharing the scientific discoveries of his Carlsberg Foundation (he was into R&D before we thought of it), and would apparently allow no humour at the dining table.

“My father was a decidedly serious man,” said Carl with admirable understatement.
“Work and moderation” was the Brewer's motto, and he believed Bavarian-style beer of the kind he brought to Denmark would counteract an addiction to spirits. He also gave generously to — among other causes — the building of a school by the pioneering educator Natalie Zahle, “a fervent believer in women's right to education”.

I spent a very pleasurable hour in that vast room with my beer and that book which also informed me that Britain bombed the beejesus out of Copenhagen in 1807 to prevent Napoleon from seizing the Danish fleet, “the first ever terror attack on a civilian population” according to author Bjerager.

The afternoon was an education with fine ale on the side.

And I was so engaged I rounded out my tour with yet another and different Carlsberg beer.

As that beardy, boozy Viking said in that funny black'n'white Tuborg commercial from 80 years ago, “Skall”.