Because it was late in the season and we were the only guests at Hall and Miles' luxury lodge, they put us in the suite where Charles and Camilla had stayed a few years ago.

Just to press home the point of what that means . . . we remind you Charles is the fellow who is going to be the next British king.

So he doesn't slum it.

Our suite at Otahuna Lodge, about 20 minutes south of Christchurch, was the original rooms of Sir Heaton Rhodes who had the place built in 1895.

They were twice the size -- at least -- of our Auckland townhouse and one morning we had breakfast in the light-filled turret area just off the bedroom.

That night we had a private five-course degustation dinner with wines to match in the library-cum-reading room downstairs. 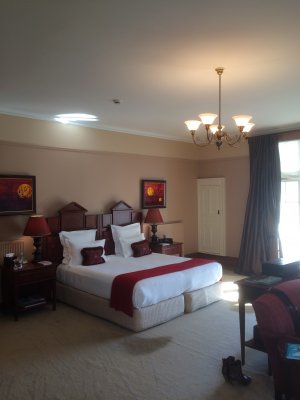 On the following night after a lazy day beside the open fire in the large and comfortable lounge and an amble around the gardens, we ate in the main dining hall.

And although it wasn't among the many options, I asked if they could do lamb for me . . .  and that wasn't a problem.

How do you write “Sigh” with a lazy smile and a comfortable yawn at the end?

Our escape to Otahuna – which literally took my breath away when I glimpsed its gleaming white stateliness at the far end of a rolling, manicured lawn – was a short luxury winter break (and just happened around special birthdays for both of us).

But pampered and tended to as we were, I believe owners Miles Refo and Hall Canon – expat Americans who bought the place a little over a decade ago and undertook a major renovation, restoring it to its 19th century glory – treat everyone like honoured guests.

As would the staff, many of whom have been there for years. Chef Jimmy McIntyre – who has a potager garden, orchard, vegetable patch and a terrific wine cellar of New Zealand’s finest to choose from – has been at Otahuna since 2003. 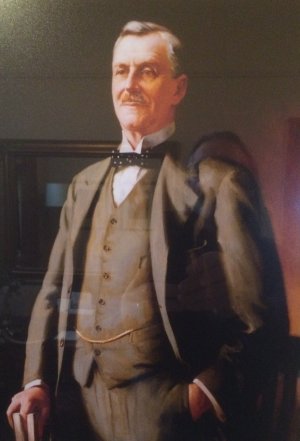 He generously shares 70 of his recipes in the lodge’s gorgeously illustrated book For the Love of a Place; The Stories and Cuisine of Otahuna in which Hall, Miles and Simon Farrell-Green trace the home back to its construction, built as a wedding gift to Heaton's young bride Jessie.

Romantically they honeymooned in Japan – ask about the extraordinary embossed wallpaper in the main dining room, like most things at Otahuna there's a story – and the Rhodes’ were quite the global travellers.

Jessie, who died before her husband, popping off to London, a journey of at least six weeks by sea in each direction.

Rhodes – later Sir Heaton – was a gentleman farmer educated in Christchurch, Switzerland and Britain who became the area's local MP for 26 years and a government minister. He established Otahuna in the Port Hills facing the Southern Alps on the horizon and lived here until his death in 1956. 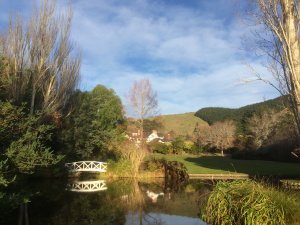 During their time together he and Jessie – with a team of permanent gardeners -- planted numerous native and exotics, created ponds and private spaces in the gardens . . . and entertained the rich, famous and politically connected in the spacious rooms.

After Heaton's death Otahuna, believed to be the largest house in the country when it was constructed, became a seminary, a commune housing about 40 (easy, our suite alone could take a dozen in comfort and you could still play indoor tennis) then a family home.

But it took the generous Americans Miles and Hall, wanting to escape New York and looking for a luxury lodge to develop, to bring it back to its original grandeur  . . . while also adding their own distinctive Arts and Crafts touches. And restoring and expanding the gardens. 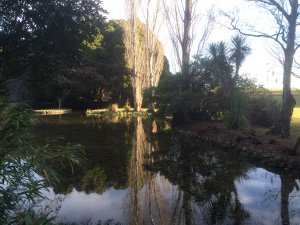 The gorgeous Dutch Garden and Woodland Garden are like private retreats, and elsewhere pathways wind through bush and what can only be called “glades” to reveal new vistas or discreet areas at each turn.

September is the month to see Otahuna – inexplicably the name means “place of the sandbank”-- at its finest.

Standing on the bottom field, Miles tells us that he once dug up a couple of square metres of ground here and counted the number of daffodil bulbs, then did the maths.

“It worked out to between one million and 1.1 million bulbs in this field,” he says of an area which shines yellow in the September sun. In every detail from comfortable beds and couches through the selection of books in the library to the extensive wine list – and small details like the homemade breads and prosciutto – the globally-acclaimed Otahuna Lodge reminds us of something very important.

That in a world of haste and a headlong rush to embrace and be seduced by The New, that an older, more stately, dignified and quieter world once existed.

And here again, even if just for a few days, you can immerse yourself in it.

Heaton and Jessie, Charles and Camilla – and we more humble folk – had it so good.

Graham Reid says his wife paid for their stay at Otahuna Lodge. He still doesn't know how much it cost. She says, “expensive but actually not that expensive” – and he doesn't care. And here is a photo of a Famous Royal with Hall and Miles . . .  and in the ghost image a man who slept with a woman who slept in the bed which had been slept in by The Prince of Wales.

(And you need to know the old English musical hall song to get that joke!) 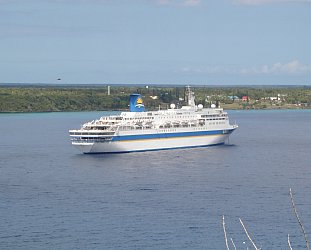 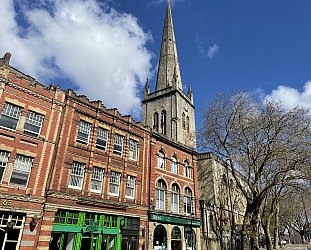 By definition, you can’t prepare for the unexpected.  So  traveling through the  maskless  Covid lands means a certain inevitability about being infected... > Read more