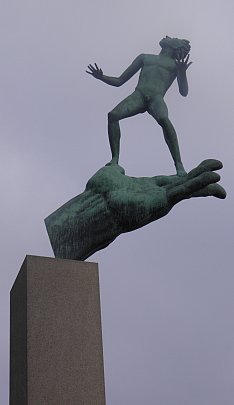 Atop a sheer bluff northeast of central Stockholm, overlooking one of the city's unglamorous port terminals on the far shore, a massive statue of Poseidon – holding a huge fish — takes in the view.

Nearby a winged Pan plays a strange flute and behind them both a glowering, bull-headed figure from Swedish mythology sits menacingly astride a muscular horse.

Over there the erotically naked Europa brings another bull to its knees, above them Pegasus and a naked man take flight as if suspended in the cool air, and here the hand of disembodied God holds aloft Man against a flat blue canopy of sky.

Everywhere, on this cold but clear day, mystery and myth mingle.

This remarkable museum, garden and art gallery on the island of Lidingo (where, more prosaically, every member of Abba has lived) is the former home of Sweden's most interesting, prolific and internationally recognised artist, Carl Milles. Known as Millesgarden, this extraordinary park — with an expensive restaurant but those panoramic views as part of the entry ticket — is a short train journey from the city centre. But, because Milles' reputation never traveled as far as New Zealand, he's a character to discover.

Carl Milles was more than Sweden's most well-known 20th century sculptor because, with his painter wife Olga, he was also a great collector.

Like many internationalists who went to Italy, they were taken by the ruins at Pompeii and Herculaneum, fell in love with Roman antiquities and began acquiring a large collection of original works and astonishingly exact replicas.

The antique collection in the Milles' now-expanded former home and garden has close to 200 sculptures, there's a replica of an Italian loggia with murals of Tuscan landscapes (in Sweden?), elaborate mosaic tiled floors they inlaid themselves, collections of pewter and, most extraordinary, a huge gallery space given over to the plaster models — some actual size — for his sculpture. 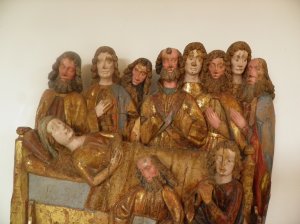 Millesgarden is a trip . . . and a trip worth making.

Carl Milles was born Carl Andersson in 1875 near the historic university town of Uppsala north of Stockholm. The name Milles – as far as I could tell — came from his mother's second husband, father to the architect Evert Milles who designed the original house at Lidingo.

Influenced by Auguste Rodin (to whom he became an assistant in Paris in the 1890s), Carl also worked in Munich and in 1908 he and Olga (who'd married in 1905) bought the Lidingo property atop Herserud Cliff for their intended home.

Back then there were no oil storage tanks across the water.

They also bought the property before it became a suburb — today's nearby houses might be anywhere in interesting, upmarket outer-city Stockholm – and Millesgarden became their home-cum-workspace. However in the Thirties, while they were living in the United States, it was opened to the public.

And shortly thereafter donated to the Swedish people because . . . Well, they weren't there.

It was in America where Carl made his name, largely for his large fountains and as head of the sculpture department at Cranbrook University in Michigan.

While he worked on the grand scale, Olga worked in oils. But she — obviously a ruthless self-critic — destroyed most of her paintings. Carl's stuff — like the enormous wooden sculpture of Man and Nature in pole-position at One Rockefeller Plaza in New York or his 12 metre tall Indian God of Peace (he was taken with Native Americans too) in St Paul, Minnesota – are rather harder to dispose of. The Milles were always expected to return to Sweden but — having become American citizens and Carl contributing monumental work to Detroit, St Louis, Kansas City, Dallas and other cities — they didn't get back until 1951, four years before his death.

Both he and Olga, who died in '67 in her native Austria, are buried in a small stone chapel at impressive Millesgarden where replicas of his most famous works stare across the waters or take flight.

For a man who dreamed big and wide — his works can be elevating or downright weird — he lived simply back at Millesgarden in those final years, when they weren't spending winters in their beloved Italy.

In the old house is a ridiculously small kitchen where, in the closing days of his life, he would have breakfast at a table barely large enough to fit a few plates.

But out a tiny window he could see that garden, the water and an endless sky stretching before him . . . and know he'd filled them all with his visions.

Getting there: Millesgarden is 20 minutes from Stockholm's central station. Take the train to end-of-the-line Ropsten, walk along the platform and go down one level to get the connecting — and synchronised -- local train for Lidingo. Get off at Torsvik/Millesgarden just one stop over the bridge. Follow the signs.

It's easy and worth it.