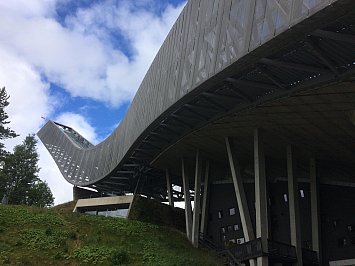 Aside from a couple of gentle coasts down a few small, snow-covered hills, the closest I've come to skiing is watching Eddie The Eagle.

For those who missed that gentle, funny and mostly true film, it followed the story of a try-hard and decidedly un-athletic English bloke Eddie Edwards who decided he would become a ski jumper so he could enter the 1988 Winter Olympics in Calgary.

Aside from the improbability of his story and the humour in the film, Eddie The Eagle reminds you what a white-knuckle and damn dangerous sport ski jumping is.

It might look graceful as the competitors fly silently through the air. But to get up there for that brief moment they must power down precipitous slopes at great speed . . .

Ad then of course there's the landing part.

On hard and slippery snow.

Just 25 minutes by train outside central Oslo – and visible on the distant skyline – is a remarkable sight, the enormous Holmenkollen Ski Jump. It is a slope of such graceful design, enormous length and extraordinary engineering that you can forget its purpose: to throw people into the clear sky before gravity takes over.

Holmenkollen has a lot of prior form when it comes to skiing.

This glorious new ramp was opened in 2010 but there have been ski competitions here since 1892 when the first jump was a mere 21.5 metres. Today's architectural marvel – the eighth on the site – allows for a perilous 141 metres. 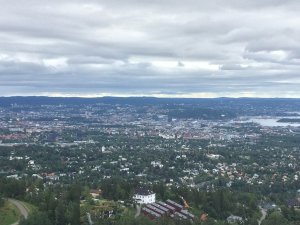 Aside from the impressive views across Oslo and the surrounding landscape from the roof of the jump – and the colon-clenching effect when you look down the slope to the ground far below – there's interesting history here too.

Even if skiing means very little to you the Ski Museum here is the oldest in the world, the first on the site opened in 1923, and shows how what was once a mode of transport for hunting and communication became a recreation little more than 150 years ago.

So here is a modern sport with a 6000 year history.

The stories of expeditions on skis – Fridtjof Nansens' Arctic exploration in 1893, Roald Amundsen's Antarctic journey to the South Pole which started in 1910 – remind you of what courageous and possibly foolhardy heroes these people were.

The film footage of ski jumpers in more recent times add an allure of elegance to an extremely dangerous sport, although the on-site ski simulator which opened earlier this year adds a white-knuckle reality check. 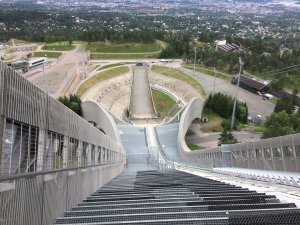 The seating for spectators at the bottom looks terrifyingly similar to that of a coliseum into which good men and women fly and sometimes crash in a cyclone of limbs and poles and skis.

And the jumps themselves were not without problems: In 1927 the scaffolding of what was then jokingly called “The Tower of Babel” collapsed the day after a competition.

From the Olympics – held here in 52 – and the many World Championships which Holmenkollen has hosted, history has been written invisibly in the air above this impressive piece of sinuous architecture by men and women who, albeit briefly, could actually soar like an eagle.

It is entirely possible that, like me, you might spend a deluded moment as you gaze down the seemingly endless slope believing that you too could fly like an eagle.

But then, again like me, you realise you'd certainly soar as shakily as Eddie the Eagle . . . and land with all the grace of a boozed-up beagle.

For more on Holmenkollen see here. 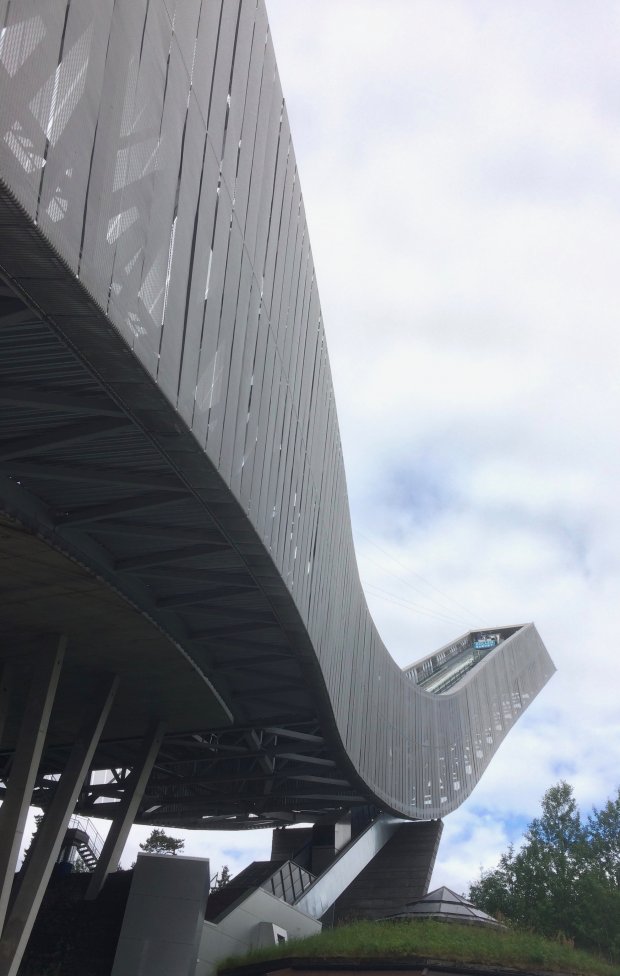