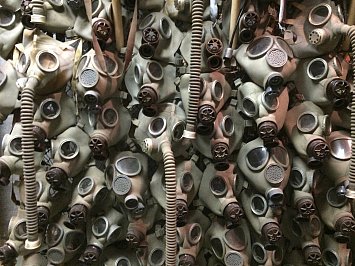 Deep below a park in an outer suburb of Prague – some four narrow flights down a circular stairwell – is an extensive warren of chilly tunnels and bare rooms.

This was a nuclear fallout shelter built during the Cold War of the 50s and, as the largest of a few around Prague, was designed to hold at least 5000 of the local civilian population when bombs dropped by the imperialist West began to fall.

You have to imagine what the bureaucrats envisioned would happen on that fateful day: The sirens sound and people from nearby schools, houses, offices, shops, factories and such make their way in an orderly manner to one of the enormous four-tonne lead-filled and blast-proof doors. Then, in an equally careful manner they descend to these cold tunnels.

In truth here's the scene: Those who weren't crushed or killed in the stampede would fight their way through the restricted space of the blast-door and stumble in a blind panic into these corridors in the hope of refuge.

And what kind of refuge would there be? 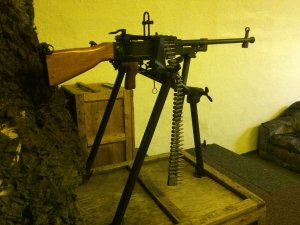 Each survivor who made it down would enjoy about a square metre of space while they waited for the all-clear that the radiation in the blighted world above had dissipated. But that better take only a couple of weeks . . . because that's all the food supplies there were.

The bleak absurdity of this scenario is chilling and almost amusingly absurd, if it weren't for the current tension between Washington and Pyongyang.

Are Seoul, Pyongyang, Guam, Honolulu or anywhere that might be in the blast ranges any better prepared than the people of old Prague half a century ago? These days visitors can go down into this bunker – rooms-cum-tombs, if you will – on a tour (“the most depressing tour in Prague” says our wry guide).

Down here are gas masks in sizes to suit everyone from infants to adults, old propaganda posters and maps, scare-mongering pamphlets, weapons, equipment to communicate with that world above which probably didn't exist anymore, uniforms on mannequins which stand in mute rows, archive photos with those who have fallen from the government's favour edited out, facilities to wash down the contaminated . . .

If it seems like a joke then it's one which leaves a dry, metallic taste in your mouth. 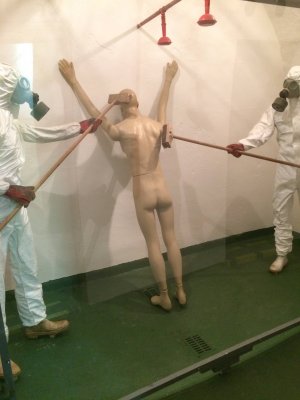 In the long view of history the Soviet-backed communist regime in the country formerly known as Czechoslovakia – which took over almost bloodlessly after the end of the Second World War and departed in much the same way – was very short, from 1948 to 89.

If the regime change was relatively benign, the period in between wasn't: About 300,000 civilians emigrated as and when they could, dissenters were interned and many disappeared.

The famous Prague Spring in 68, a period in which it seemed liberalisation of the communist grip was at hand, was short-lived. Soviet tanks rolled in to not just restore the political order and suppress dissent, but to send a warning to other satellite states of the Soviet Union.

The Communist walking tour points out the former headquarters of the STB secret police where many entered but were never seen again. Today it's a police station (“Things don't change very much”). Symbolic recent sculpture and old bullet holes are there to be pointed out, as is the place in central Wenceslas Square where the student Jan Palach set himself on fire in early 69 in a suicidal protest action.

You can also see the balcony there from which the Czech writer, political dissident, rock music lover and then first president of the Czech Republic Vaclav Havel addressed the crowds when the Soviet regime was increasingly unstable and beleaguered in the late Eighties.

The communists saw the writing on the wall . . . or would have, but The Wall came down in Berlin in 89 and then the political dominoes started to fall. The Velvet Revolution -- so named because of the non-violent transfer of power – saw the one-party state devolve and the eventual emergence of the distinct Czech and Slovak republics.

To outsiders and from this historical distance, the lack of bloodshed at that time seems remarkable and rare. But it's not hard to find opinion divided over the self-immolation of Palach (his motivation might not have been entirely political) or the legacy of Havel. Some say, in the interests of the peaceful transition to more open government, Havel and his government were far too light on the former communists, many of whom had feathered their own nests and whose families remain among the most wealthy in the country.

These are discussions for historians and economists perhaps, but the visitor to the underground bunker is confronted by the stark and strange reality of what it must have been like in a country where its government created and ruled by a climate of fear. And how bizarre it can look to us today in this beautiful, cultured and historic city.

Deep underground there is a mock-up of a small family group of mannequins, the husband standing, wife in bed and two young children all wearing gas masks. The little girl is cradling a a doll, the boy holding a semi-automatic toy gun.

Here they are safe and secure, a disturbingly domestic scene made more surreal in this quiet and cold place.

Of course in reality this nuclear family, if we can call them that, might have been burned to a crisp if they weren't crushed in the rush to escape the firestorm. And if they had, against the odds, all made it down here they would probably have slowly starved to death while they waited for the all-clear.

Or exploded as they stood in an endless queue for one of those five toilets.

For more information on the Communism and Nuclear Bunker Tour in Prague see www.prague-communism-tour.com