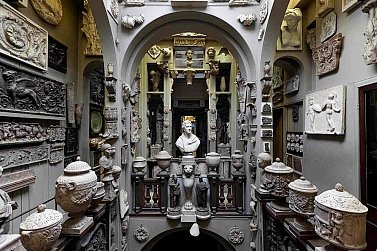 For the young aspiring British artist or architect in the early 19th century, the Grand Tour in Europe was essential. Over there in more ancient cities, the churches and museums were objects to be studied, drawn and learned from.

At least until wars intervened, the despised French occupied Rome and closed the city to English artists, academics and aristocratic fops drinking their way around the Continent.

Fortunately in London, behind a handsome but hardly spectacular facade, there was a one-stop cultural shopping mall of antiquities: the home of the grumpy architect Sir John Soane.

Soane (1753-1837) was professor of architecture at the Royal Academy and his most famous project was the Bank of England building, although unfortunately little of his effort remains in it today.

His greatest legacy however is his house at Lincoln's Inn Fields. Behind that frontage is a home-cum-museum which is a bizarre, bewildering and often breathtaking – and sometime laugh aloud – collection of stone, plaster and painted artifacts, so many he had to buy the houses next door to his own number 12 and gut them beyond the front rooms to create walk-through galleries. The basement area became his catacombs in the crypt. The effect is overwhelming as each new turn reveals more old stuff in alcoves, recesses and anterooms, yet there's a clever mind at work.

In his dining room and library – some 7000 volumes in beautiful condition – he placed mirrors above the bookcases near the ceiling to give the impression of rooms beyond and open up the space. But it is upstairs in the Picture Room where visitors gasp in awe or laugh aloud.

In a marvelous conceit, a whole wall of paintings is hinged. When opened there is another wall behind which displays panels of Hogarth's famous series The Rake's Progress. There are other Hogarth's here too as well as three breathtaking Venetian scenes by Canaletto, ink and wash drawings by Piranesi, a portrait of Soane in Masonic dress, a landscape by J.M.W. Turner . . . Just a lot of art climbing walls.

Soane's house is like a Chinese puzzle, constantly opening to reveal some new wonder or the unexpected.

By many contemporary accounts however, Soane was an envious, vengeful and arrogant man. He fell out with his sons George and John, and when George's daughter fell ill and he begged his father for financial help the old man denied it. The child died. You have some small sympathy for Soane's position: George was a ne'er do well who spent time in debtors prison for fraud. He later penned an anonymous letter on the parlous state of British architecture which was little more than an attack on his father.

Soane lived at Lincoln's Field Inn alone among his eccentric collection for 22 years after his wife's death, constantly rearranging and renovating to get more space for his beloved artifacts.

Today the place is undergoing a $14 million restoration and refurbishment but remains open.

In his 1990 book Gallery, the late British writer and wit Daniel Farson said, “If you have friends, then drag them here. It is worth the effort for your own satisfaction and they will bless you for showing them one of the most surprising art galleries in Britain.”

Yes, the Soane Museum is a folly and if you look at the man's architectural drawings he would have made over London into something like an awful, pneumatically-inflated ancient Rome.

But his house – a Grand Tour you could do in comfort and go home at night for tea – is a strange delight where walls are hinged and there is a “monk's parlour” in the crypt.

You can't say that about too many people's homes . . .

The Soanes Museum is a wondrous place. Easy to spend hours there and then go back for more. 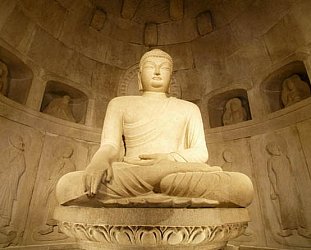 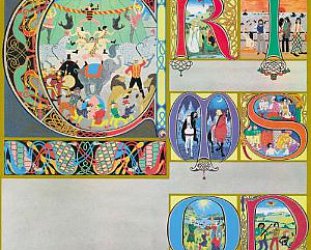