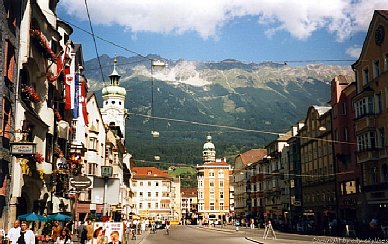 For about four years, from when I was maybe 10, I carried a photograph of Innsbruck in my wallet. Of course at that age I had very little else to put in a wallet and I can't remember what else might have been stashed in the thing. But the picture of Innsbruck I can still conjure up.

It was highly coloured -- the sky an impossibly vivid blue -- and showed a view down what I took to be the main street.

Innsbruck looked ridiculously photogenic with its old buildings, narrow street and, most striking of all, snow-dusted mountains that towered up from the very end of the road. I fell in love with the Austrian city and always promised myself I'd get there.

Or more correctly, get back, because the reason I had the credit card-sized photograph (taken from a series contained in small brown cardboard case popular with tourists in the late 50s and early 60s) was because I'd been there as a baby with my parents. I remembered nothing of it except the exotic name which I heard my parents mention over dinner sometimes, but the idea of snowy mountains and that bright, hard-edged photograph in my wallet kept some idea of the place alive for me.

That photograph -- and somehow Innsbruck itself -- became the promise and possibility of travel, of seeing something more than my school playground, the muddy rugby fields on weekends and cricket pitches of summer.

Innsbruck became a magical place in my imagination, and I had the photo to confirm its beauty and mystery.

When my teenage years started Innsbruck probably got traded in for swinging London or Liverpool, and an all but empty wallet just seemed an embarrassment.

However, I kept the photo for many years after and although I can't put my hand on it right now I bet it is somewhere in the bottom of a box. But I don't need it, I know exactly what it looks like.

A few years ago I was in London and going to Brussels for a few days. For the following weeks I was free, although I had thought I'd like to see a couple of famous galleries in Spain. Then I remembered Innsbruck.

A train trip from Brussels, that's all it would take to realise my dream. Easy. Necessary even.

Over lunch I mentioned this to an English friend.

He became excited and regaled me with stories of skiing and parties in Innsbruck, of flicking over for the weekend with a few friends and their girlfriends, of long and rowdy sessions in bars and hotels after a day on the slopes, of the amount of alcohol they would get through, of hangovers blown away by a mountain breeze, and then going out on the town to do it all over again.

He made the place of my youthful dreams sound like a schnapps-fuelled party for ski bunnies called Samantha and an excitable bunch of over-moneyed Hooray Henrys.

I don't know whether that is true. Maybe it is no more true than my photograph.

But I booked a flight from Brussels to Barcelona instead.