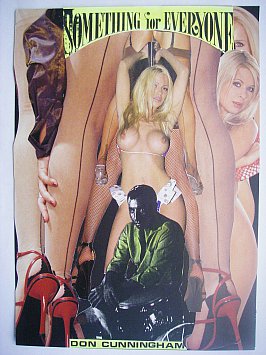 Some albums come with a great back-story. There have been books written about Miles Davis’ Kind of Blue and John Coltrane’s A Love Supreme. The recording of a Britney Spears album might not be quite so interesting, although the picture book or dress-me-up doll might have some market value.

And as Britney proves, you cannot judge the quality of an album by the enticement of its cover. And yet not that long ago an album came my way and while it didn’t boast legs, breasts and a whole landscape of thigh there was something that caught my eye . . .

On it was a kind of washed-out but hip 60s image of a suave-looking, greased-down guy – Puerto Rican possibly – behind a drum kit, superimposed on an uninteresting backdrop which could have been a bit of New York from Central Park. Or anywhere actually.

The typeface was also very 60s and the liner notes stated “ The Living Room of the Playboy Club in St Louis. Bunnies plus food and drink equals a good time for keyholders and guests”.

Dunno about you, but this sounds intriguing, a back-story is building for sure.

The album was Something for Everyone by the Don Cunningham Quartet and is a reissue through Luv N’ Haight. 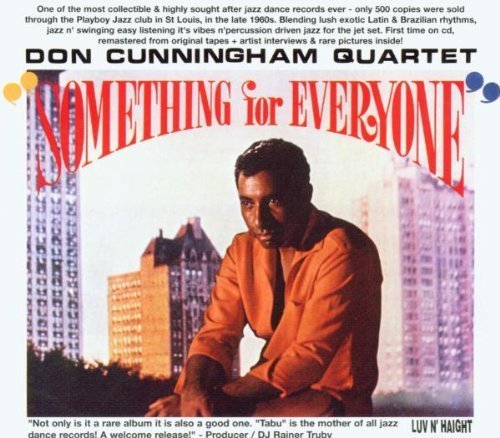 And here’s the story as far as I can tell.

Cunningham – who appears in no jazz reference on my shelves – became a multi-instrumentalist after tours of Fiji, Australia and the Caribbean as part of Johnny Mathis’ group in the early 60s. He discovered what he called “the island sound” which he felt was mysterious and sexual. So he added steel drums, congas, logs, bells and bongos to his artillery of vibes, marimba and saxophone.

In 1965, Cunningham and his band of pianist Marion Miller, bassist/cellist John Mixon (who had played with Lionel Hampton) and drummer Manny Quintero, scored a residency at Hef’s club in St Louis where, for the next three years, they entertained the jazz-dance crowd with their implosion of exotic music.

A local businessman struck up a friendship with pianist Miller and funded Exclusive Records (a cool, very Playboy Club, name) which got them into the studio. They only pressed 500 copies of Something for Everyone and most were sold or given away at the club.

Finding a copy would seem unlikely, but someone did, so here it is again in a facsimile of its original sleeve, with liner notes by Brad Holiday, a man who was obviously more than passing familiar with the Playboy Club in St Louis.

It’s a good back-story and a thoroughly enjoyable album which offers a snapshot of the faux-exotica/erotica of the period. There are ladle-loads of Caribbean sounds (Angelina is a bubbly dance track just a “deh-o” away from Belafonte) and the spirit of Cunningham’s old bossman Mathis walks through the smooth ballad, I’m Your Slave, that goes off with double-time percussion and real finger-pop swing.

But the highpoints are the boisterous Quiet Village (located somewhere in equatorial South America) which thumps in the bottom and has whoops and bird calls over the top of the simple piano motif, and the rollicking Tabu, which sounds like a Hawaiian Take Five as Quintero finds his inner Joe Morello.

Some of the seven tracks aren’t strictly “jazz”, but on these last two particularly the band show their credentials.

But are never anything less than fun.

A couple of other tracks tell you all you need to know in their titles – Manha de Carnival which is a swingin’ sax-driven number -- and Samba de Orpheu. Then it’s all over, two sides of vinyl clocking onto shiny disc at a tidy 35 minutes.

All killer no filler as they say.

The punch line might be, “and Don Cunningham was never heard of again“.

But according to the reissue notes, he was still on the road with his wife and appearing as The Cunninghams.

Maybe he’s right that this was world music because it drew on Polynesian, Latin and West Indian sounds. He’s probably more correct when he says it was “inspired by – but is not really – easy listening”.

Whatever, Something for Everyone is a funny, fine album from a footnote in music -- and despite a conspicuous superficiality and somewhat obvious musical referencing, it will get a lot of home-time play.

Okay, it’s not Kind of Blue or A Love Supreme, but it’s not a bad back-story, huh?