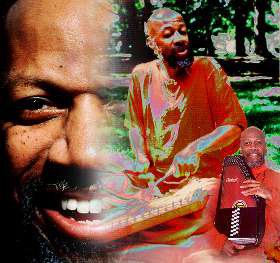 Rather cruelly, when the English rock writer Andy Gill reviewed the Laraaji album Days of Radiance back in 1980 he opened with "Zzzzz . . ."

Fair call in some ways, but in its defense the album was the third in Brian Eno's ambient series and the second side was taken up with two long pieces entitled Meditation #1 and Meditation #2. And you could hardly expect someone who played gentle zither to really wig out.

Despite the mystical sounding name, Laraaji was actually Edward Larry Gordon and he wasn't some Eastern mystic but a black guy from Philadelphia who had studied music theory and composition at Howard University in Washington DC.

Prior to the Eno connection -- which happened when he was in his late 30s -- he'd played keyboards in funk band in New York and had worked as an actor and comedian.

In the early Seventies he'd gone on the spiritual path (as many did) and had immersed himself in meditation. He also began experimenting on zither. Gordon electrified the thing and began to work on his own expansive, restful sound which could accompany meditation.

He played in parks and at healing centres around New York (this was the time when New Age music was emerging) and was spotted by Stuart White who was a lawyer with his own record label, SWN. In '78 Gordon recorded the album Celestial Vibration for SWN but distribution was limited and, let's be honest, it disappeared with little trace.

Of it Gordon later, by then styling himself Laraaji, said, "The influences at play were definitely spiritual jazz, serenity, spiritual vision of an all pervading field and the energy of performing so many years for modern dance and contemplative situations". 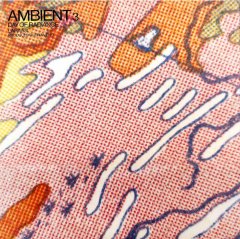 It was while he was playing in Washington Square Park a short time later that Brian Eno saw him and produced his album Ambient 3: Day of Radiance with Gordon now under the name Laraaji.

Doors suddenly opened and Laraaji was out there with Eno's compadres Jon Hassell, Michael Brook, Harold Budd and others. He also immersed himself deeper into meditation and spiritual practices (he became Laraaji Nadabrahamananda) and throughout the Eighties recorded almost two dozen albums of gentle zither and kalimba on his own label and other small indie outlets which found their way to meditation halls and New Age bookshops.

Michael Brook produced his album Flow Goes the Universe in '93 and latterly Laraaji has been behind the laughter workshops movement.

His album have rather cringe-inducing titles like Unicorns in Paradise, I Am Sky, Celestial Zone and The Way Out is The Way In.

So rock guitarists looking for another riff to steal might as well move on fast. This is quiet music, barely there.

Reviewer Gill noted back in '80 that invariably with ambient albums you review the press release because the music is hardly worth analysis -- and in that case Laraaji's claims at that time were couched in the customary New Age psycho-babble and spiritualist-speak that was just annoying. The music on Day of Radiance however, although Gill barely mentioned it, was delightfully tranquil, discreetly exotic and hypnotically restful. Ambient music for meditation no less -- but not something that merely drifts away. Much of it sounds driven by a minimalist/Steve Reich/Philip Glass impulse.

In 2010 that long lost debut album by Edward Larry Gordon/Laraaji Celestial Vibration was digitally remastered and re-issued on Soul Jazz Records and consists of two 24 minute pieces, All Pervading and Bethlehem.

These pieces are much less propelled by the minimalist repetition on Day of Radiance and come as gentle washes of sound which, in many ways, are rather more intelligent and spiritually-inspired precursors to the often vacuous New Age drivel which followed.

On the liner notes -- which appear to be the original notes reproduced - Gordon does tend to speak a lot of the God conscious-vibration-realisation-harmony cliches that became increasingly common in the Eighties, but it is perhaps unfair to review what artists says rather than what they do. That would be Gill-like.

Celestial Vibration moves in layers and steadily unfolding passages where phasing and subtle new elements (distant percussive effects) sit in behind the liquid mercury of the zither and the synth manipulation.

Certainly not an album for anyone looking to detect a pulse in it, but you can hear where Edward Larry Gordon aka Laraaji was coming from -- and taking you to.

Not such a bad place actually.