There is an interesting photo of singer and one-man band Abner Jay in the late Seventies playing at what is described as a folk festival. As he pours his all into whatever song has captured him, by his side is a young girl playing the bones.

That is, she has what looks like the skull of a horse or cow strung around her neck and she is playing it with what appears to be a femur.

The image -- the girl dressed like she's going to church, Abner in off-the-farm overalls, a black kid squatting just off frame against the block wall and looking on -- might have been taken some time back in the Twenties if it weren't for the microphones.

Doubtless the girl had been given a few tips by Jay becase he was -- among many other things -- an exponent of the bones which he had learned to play as a child himself.

Abner Jay – who died in '93 – was a rare one whose music conformed to no particular style . . . but it incorporated gospel, blues, folk, r'n'b and something akin to soul. He was certainly soulful when the spirit moved him.

He described himself as “the last great Southern black minstrel show” and was a one-man touring band.

Born in Georgia in 1921, he learned banjo from his grandfather (a former slave), was playing in medicine shows as a child, made his way into radio and then took to the road singing songs imbued by the spirit, or full of political and social commentary. He was just as happy to deliver a sermon by way of a monologue as to belt out some soul or r'n'b. In later years he had a mobile home which doubled as his performance space, he toured constantly and played for tips, he crossed paths with Little Richard and Chuck Berry, appeared at the Apollo, and his songs dealt with topical issues (cocaine, Vietnam) as much as the spiritual.

And on the recording posted here from the same year as Motown and the Beatles were dominating the charts, he delivers gospel soul that can shake the walls of the building.

And a sermon along the way.

Nobody would argue this was sophisticated, but it's lack of polish, its "authenticity" if you will, is what makes it distinctive and unique. 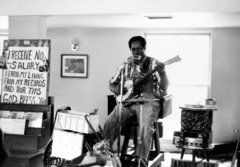 He also kept traditions and songs alive in his own way: he was comfortable singing I Dream of Jeannie, Camptown Races and Dixie as The Old Rugged Cross and Amazing Grace.

He was a rational moralist (one songs is The Reason Young People Take Drugs), fathered 14 children and attributed his deep voice and good health to drinking a gallon of water from the Swanee River every day.

A compilation album One Man Band was released in 2002 and another reissue (The Love Wheel) came out in 2012. Both are available through iTunes, Amazon etc.

But the track here is taken from a terrific 3-CD set Fire in My Bones; Raw and Rare and Otherworldly African-American Gospel 1944-2007 on the Tompkins Square label. And it is often other worldly and almost always raw.