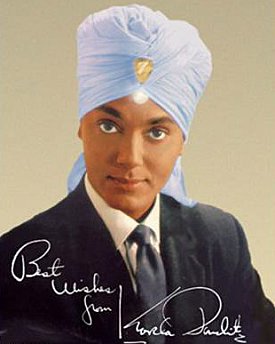 The exotic looking Korla Pandit – who died in 1998 aged about 77 – had a fascinating background: He was born in India to a traveling French opera singer and a Brahmin priest and eventually ended up in Los Angeles in the mid Forties after spending time in Europe and Britain.

His music was just as interesting as his somewhat mysterious life.

He played the organ but managed to get an eerie sound out of it, and his '50 10 inch album Grand Moghul Suite included pieces entitled Turkish Dance, Ode to a Desert Love, Tale of the Underwater Worshipper and Trance Dance. The piece Procession of the Grand Moghul owes more than a little to Ravel's Bolero.

He recorded albums with titles like Korla Pandit Plays Music of the Exotic East, and Music of Mystery and Romance.

Korla was firmly in the world of exotica, alongside better known names like Martin Denny, but could also turn his hand to waltzes, tango, popular songs . . .

He recorded Christmas albums which came in covers that make it into "worst album covers of all time" lists. 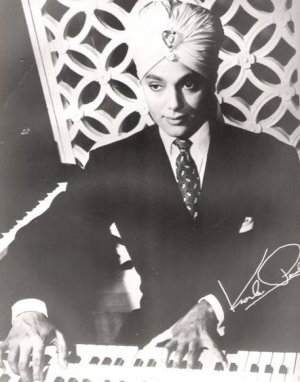 Aside from his music – it is hard to find his original 78s, 45s and albums, thank Heaven for Spotify and iTunes – the most interesting thing about Korla Pandit is that he wasn't actually Korla Pandit.

He was Juan Rolando.

Actually he wasn't even Juan Rolando.

And despite his appearance – the turban doubtless helped – he also wasn't Indian but had been born John Roland Redd In St Louis. His father was a black American reverend, his mother French-African and he was one of four children.

He seemed to move around a little but by the end of Thirties was in Los Angeles. He came to attention playing supper clubs in LA as the Mexican keyboard player Juan Rolando – to circumvent the racism of the period, and oddly enough wearing the trademark turban – before he met his (white) wife Beryl. (They married in Mexico to sidestep the miscegenation laws of the era.)

Together they reinvented and restyled him as Korla Pandit in '48, and gave him the mysteriously exotic backstory.

His break came shortly after when he provided the strange music for the long-running radio series Chandu the Magician (which had started in '31 and had been revived) and he moved into television work. He had his own show Korla Pandit's Adventures in Music in the early Fifties and with his smoldering good looks and air of mystery he became the housewives' choice.

Given his image and musical style, it comes as no surprise that when he fell out with one television producer he was replaced by the equally camp Liberace. 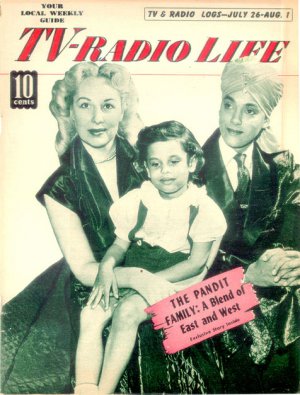 Oddly enough he also recorded with the Sons of the Pioneers, Roy Rogers' first group.

He recorded numerous albums, appeared in a number of films (among them Richard Pryor's Which Way Is Up?), played supper clubs and appeared as himself – Korla Pandit, that is – in Tim Burton's film Ed Wood in '94.

Although many doubtless knew his secret, it wasn't until a major story in Los Angeles Magazine by senior editor RJ Smith in 2001 (under the title The Many Faces of Korla Pandit) that the whole truth behind “Korla Pandit” came out.

Personally, I prefer to think of him as an exotic, mysterious man who – because he lived most of his life under the name – was Korla Pandit.

From the mystic East.

In preparing this article Elsewhere is indebted to those who have documented the life of this remarkable character, among them David de Clue, Graham Russell and especially the many contributors to the Korla Pandit website.