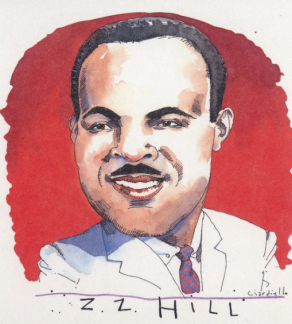 Arzell Hill was a soul and blues singer who came to serious attention in the early Eighties with his crossover hits Cheating in the Next Room and the terrific Down Home Blues. He was in his mid Forties at the time and had been recording two decades, mostly with little success beyond admiration and critical appreciation.

It was dreadful tragedy then that just two years after he was enjoying real commercial success that he would be badly injured in a car accident and would die a couple of months later as a result of it.

Hill came out of Texas and the gospel tradition but as with so many form the church, he embraced secular music and brought a yearning soulful quality to it.

In the early Sixties he was right there alongside the likes of Bobby Blue Bland, Sam Cooke, Joe Tex, Marvin Gaye and especially Otis Redding who encouraged him.

Moving to LA where his record producer brother Matt lived he began recording for the small but creditable Kent label.

He knocked out one single after another (most of them originals or co-writes) and an album A Whole Lot of Soul for Kent, but – unfairly in retrospect – he got no chart action.

Yet, remembering Gaye was writing and singing songs like Hitchhike at the time, he was certainly occupying similar soul-pop space and if material like Have Mercy Somebody might be a bit too close to Don Covay's Mercy Mercy (aka Have Mercy) he wasn't alone at the time working in a genre as he tried to find his voice.

Not that he needed to look far for that, Hill's ache and heartbreak is writ in songs like Everybody Has to Cry, his version of Sam Cooke's Nothing Can Change the Love I Have For You and You Can't Hide a Heartache.

With horns, women backing singers and a touch of funk is the arrangements these songs for Kent certainly deserved more airing then they got, although you can hear why radio programmers might have a listen and said, “Yeah, but we got one like that from . . . .”

If Hill was a writer in search of style, for that sole Kent album he was a wonderful interpreter of material by others in his covers Isaac Hayes' classic When Something is Wrong with My Baby, material by Allen Toussaint, Sam Cooke (You Send Me and Nothing Can Change), the Pickett-Cropper soul stomper Midnight Hour, Eddie Floyd's Knock on Wood and the sublime When a Man Loves a Woman.

But of course he was almost inviting comparisons he couldn't win.

Why would anyone want ZZ Hill's When a Man Loves a Woman, no matter how good, when Percy Sledge had delivered such a definitive version the previous year? 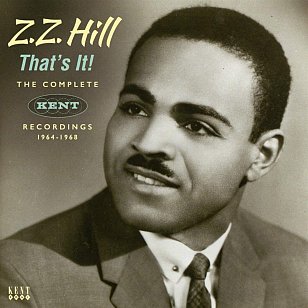 But soul music is about an artist going deep inside themselves and you couldn't take that away from Hell, he could really plumb the depths of an aching and breaking soul as much celebrate a found love (Make Me Yours).

However it never worked for him as much as it should have, and later in his career he explored the blues side of his talent.

Among the 49 songs spread over two discs (with an excellent accompanying booklet) on That's It! The Complete Kent Recordings 1964-1968 (Kent/Border) are songs which are considered rare cuts by soul collectors.

If the name is new to you and Sixties soul touches your heart then ZZ Hill will be some kind of discovery.