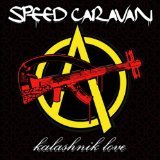 The sound of the oud, a Middle Eastern lute, has frequently found favour at Elsewhere, notably with Le Trio Joubran and Anouar Brahem, and albums like Cairo Nights.

But as the title of this album suggests, this is a very different kind of oud music: this is electric oud turned up loud and sounding abrasive, angry, politicised in the context . . . and closer to the Hendrix/Stevie Ray Vaughan axis and a child of post hip-hop culture than anything previously posted at Elsewhere.

There's also a fiercely electro-funk component from the band which sits behind the coiling vocals (mostly from various guests including Rachid Taha) and the searing oud of Algerian-born Mehdi Haddab. This is music which rocks and rages, and doubtless they will be one of the main attractions when they play the Taranaki Womad in March.

This is explosive stuff.

Interestingly they also do an urgently angry version of the old Cure song Killing An Arab (an incident taken from the Camus novel lest you think something else about it) and given who is singing it, the song takes on multiple and complex meanings. It also rocks.

Hey these people rock, this would be great live for sure!

We saw Speed Caravan at Womad in New Plymouth on Sunday night and they were amazing! There was a huge crowd for their second appearance (previously appeared on Friday night), swelled by word of mouth. Seeing this guy in action (Mehdi Haddab) must be akin to seeing Hendrix in the 1960's - he is startling different to anything around today and the band has such a heavy sound, it is like being in an Arab fire-fight with machine guns and heavy artillery pounding from all directions. The atmosphere is at the concert was electric. The CD is a must and if you get a chance to see them, don't miss out - you will regret it.

Speed Caravan transformed the Oud into a raging rock machine

There were indeed great @ Womad. Now if only someone would sell me the cd! Nothing locally, Amazon UK $ US don't have it and Amazon France want NZ$65. Any suggestions?

www.womadshop.com have it for £14.50
iTunes and Amazon have it as mp3

Yes I'm after the Cd too. Have messaged them on Myspace and asked MArbecks.co.nz
Might try CDUniverse.

I have done my homework and I have this on excellent authority: the album is currently out of print but the band are going into Peter Gabriel's studio record another track or two to add to the reissue which should be out on the Real World label in September/October. Patience.

I stumbled across Speed Caravan at WOMAD this year on the friday night and couldn't believe it. Mehdi Haddab was something else. I was so blown away by the sounds he got out of that oud that I went and saw him do an acoustic performance on another stage by day and then the Sunday closing performance. If you had your eyes closed you'd swear there were about 3 oud players crashing in bar on bar, but no, just him. Bumped into him after he left the signing tent and he was just as enthusiastic as on stage; he used to play guitar and oud but now "only oud".

The f_ck off large Marshall amp behind him is part of the secret, and yeah, I'll mention Hendrix again, because I felt the same awe as when I first saw film of Jimmy doing Star Spangled Banner at Woodstock. The Marshall tortured harmonics a common thread.

Got the album after but it doesn't quite roll the same way. The vocalist has since gone, Mehdi singing live, and a new girl doing the beats holding the thing down. So the album doesn't reflect the current. Thinner, less powerful. Galvanize is really the datum; that thing flies off the handle no matter how you listen to it (although a tip; make it LOUD!) I even heard rumour it's to be ripped off for an ad campaign.

I wonder how quickly Speed Caravan are morphing. I would love to see the album re-recorded rather than a couple of songs added, particularly Galvanize.

I have just seen Speed Caravan at Glastonbury (though unfortunately they were cut short through a power cut). It was a random thing - passing the Jazz World stage - but it was as good and compelling as all above comments suggest. Never heard anything quite like it, a highlight of the festival. I bought the CD from the Song Lines magazine stand, in advance, I was told, of its official release in September. Very strongly recommended .