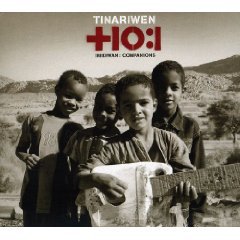 Alongside Etran Finatawa, Tinariwen out of north Africa have been in the vanguard of what the international music press has dubbed "Sahara blues" for their stinging guitars which seem to refer to Chicago '65 and the mesmerising rhythms which conjure up space and landscapes of the subsconscious.

They are grounded but elevating.

With a revolving door membership it was inevitable that their sound might subtlely change and this time out they seem to have gone back to their roots which can sound disconcertingly psychedelic in places as those sharp-edged guitars slide into the foreground or tickle around the edges.

The vocals have a misty and distant feel (not always, the tongue-twisting Tenhert will catch you by surprise) and there is a gentle rolling out of the melodies. "Stoner music" a friend called it, and he could be right.

But it is also grounded in the stark realities of their lives -- which means it can be melancholy, contemplative and joyous in turn.

This is an album -- as with their previous ones -- to get thoroughly immersed in.

They've scored a rare trifecta with this appearing as one of the Best of Elsewhere 2009.

Check out the clip below and you'll start getting the picture of their remarkable lives and story.

My first taste of desert blues and I loved it. I keep coming back to this one. As for the actual genre "desert blues" it's a style of music not unlike the various sounds released by Cuba's legendary EGREM Records...buy just about any album blind and you're guaranteed something good.