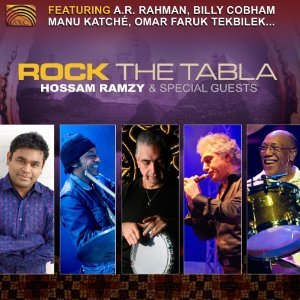 With the kind of diverse guests only this acclaimed Egyptian percussion player could call on -- jazz drummers Billy Cobham and Manu Katche, A.R. Rahman (aka "the Mozart of Madras", of Slumdog Millionaire soundtrack fame), guitarist Phil Thornton, taiko drummer Joji Hirota, Indian and Egyptian ensembles -- the great Ramzy once again redfines the meaning of world music (largely by ignoring boundaries) and creates a spring-heeled rhythm-driven album which at times sounds as trippy as any Western psychelic rock and at others a reflective, moonlit night at the oasis.

The opening instrumental Arabantana seduces you in with acoustic and electric guitars (John Themis), keyboards, violin and Ramzy's string ensemble as it pulls together elements of Spanish flamenco and dramatic North African folk. But the second half of it takes off into the cosmos.

It is indicative of the journeys which will follow on pieces entitled Cairo to India (an exciting amalgam of wordless Indian singing and boiling percussion), Ancient Love Affairs (movingly spare with Elhamy Ezzat's aching vocals), Billy Dancing (yes, Cobham and belly dance) and Dom and Doumbia (a percussion duet located somewhere betwen Mali and Cairo).

The title track (with a secret, uncredited guitarist which I take to be Ramzy's old friend Jimmy Page perhaps?) lives up to its promise.

Bluesy Flusey is, for want of a better description, a Sahara raga with electric violin and Sawagy is like a Latin belly dance.

There is an uncredited bonus track -- the swirling This Could Lead to Dancing, as it undoubtedly could.

Down the decades Ramzy has worked with Page and Plant, Peter Gabriel, Sting, and jazz players like Chick Corea. He has written soundtracks and has long been an Elsewhere favourite for his albums which, while grounded in North Africa, have a musically inclusive worldview.

If for some reason he has gone past you, you could do worse than tuning in right here and then following this link to more.

Like the sound of this? Then check out this . . . and don't be put off by the cover.