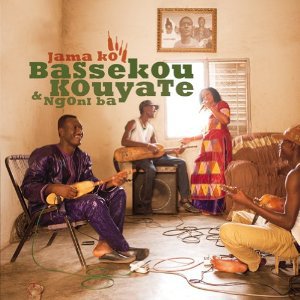 It has been five years since this superb ngoni player (a lute/banjo-like instrument) from Mali delivered his beautiful Segu Blue album. Formerly a member of the late Ali Farka Toure's inner circle, Kouyate has continued to deliver beguiling albums in recent years, but few were made under circumstances as tough as those for this one.

On their first day in the studio in Bamako, Mali's capital, there was a military coup and the democratically elected president was tossed out.

Politics was heavy in the air as in the north the Islamic rebels were also marching south and, imposing sharia law, were banning the playing of music, smashing instruments and harrassing musicians. Inevitably this volatile mood influenced the music Kouyate was making (with his new band which included his two sons) and so we get Ne me fatigue pas, a stuttering and angry piece which is a rolling boil of energetic percussion, naggingly melodic ngoni lines run through wah-wah and a real sense of urgency: don't wear me down.

The more considered title track which opens the album is a gentle plea for peace (and Mali's reputation for tolerance in the Islamic world) amidst the chaos.

As always there is hypnotioc ngoni playin here -- four players on different ngoni -- and Poye 2 is a low blues jam between the band and Taj Mahal on electric guitar and John Lee Hooker-styke vocals. Its  something else.

This is an exceptional album which crackles with fist-clenching energy as much as it touches the heart.

One of the best acts at Womad.