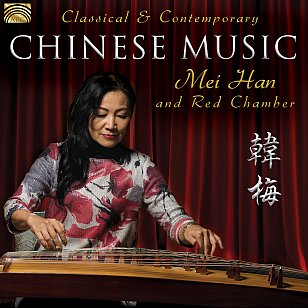 For Western ears, the sound of Chinese music falls into cliché (“Oh, Chinese music . . . riiight.”) or something so discordant (traditional opera) that it's easy to dismiss on a cursory listen.

However – setting preconceptions aside if that is possible – this album by a child of the diaspora brings a bigger picture.

Mei Han learned the plucked-string zheng tradition in China, travelled extensively and studied ethnomusicology in Canada and is currently an associate professor at a university in Tennessee.

As in her life, she crosses musical boundaries.

A piece like Dark Red Ruby – written for her by Moshe Denburg – sounds more acoustic prog-rock and closer to emotionally elevating klezmer and bazouki styles.

Some of this – despite being on traditional instruments like the zhen and pipa – moves into a generic world music/Sino-crossover and pulls up the anchor from its Chinese roots. Reference points here – outlined in the useful notes – include music from North Borneo, Bulgaria and koto from Japan (on the rather pleasingly poised Nokoto for the latter).

Elsewhere however there is the elegantly reflective Hian Medley which looks back many centuries into the Chinese tradition of court music.

Those of us who do not know the centuries of this tradition might feel that between the New Age resonances ( the evocative but surface-skimming Girls Picking Flowers) and the deeply rooted pieces (the delicate Peng Baban which unfurls over 10 minutes) there is something here which sound – but often isn't -- traditional and maybe appeals to ideas about Chinese music perhaps more than specifics.

The album title doesn't mislead but the pieces which borrow from other sources are not quite as persuasive as the traditional (or updated traditional) pieces.

For more on Chinese music at Elsewhere start here. For an amusement about the pipa go here.